When he’s not writing experimental synth-folk, Roberto Carlos Lange is breaking new ground in the world of collaborative visual art.

If “innovation” best describes what Florida-born, Ecuadorian maestro Helado Negro does in his musical life on electro-Latino tinged, socio-political albums like 2016’s Private Energy and 2019’s This Is How You Smile, “playful passion” is what delineates his strange—but wise—work as a visual and sound installation artist.

Whether alone or in collaboration with fellow multidisciplinary artists like his wife, Kristi Sword, the artist born Roberto Carlos Lange seems to have something of a dumpster-diver art aesthetic wherein garbage bags, tinsel, plastic bits, cardboard, hardware, and electronics meet in a cartoonish (but not necessarily comic) fashion.

“Visual art wasn’t exactly a precursor to my music, though I did attend Savannah College of Art and Design to study animation in the late ’90s,” says Lange of his schooling. Before he got to college, he would stay up late to watch MTV’s famously experimental art-video animated program, Liquid Television. “Between those videos and my brother bringing back jungle, rave, and techno music from his time in Europe—I was impressionable, like thirteen years old—there was a parallel connection,” Lange explains. “Something alien, but affixed.”

Eventually, the alien became familiar to Lange—in fact, it now seems like second nature. What set off his deeper dive into experimentalism was the sketchy sound and vexing vision of threadbare theoretician Norman McLaren’s 1952 anti-war film Neighbours. “It was so cool in regard to its social commentary and simplicity, its goofiness and seriousness, how he hand-painted sounds onto optical film,” Lange recalls. “That became the catalyst for me, taking foreign tools then making them your own.” 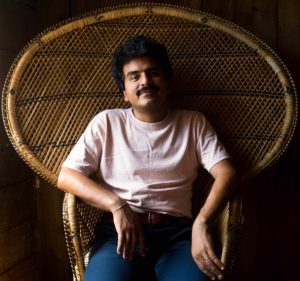 Lange went on to make everything from tinsel mammal sculptures—costumed humans covered in shimmering tinsel suits who dance onstage while he sings—to a hallucinatory music video for the quiet track “País Nublado,” a work soaked in color-based metaphysics. Moving from the past to the present, however, Lange sees his visual work and its audio counterpart (not specifically related to his songs and albums) as growing more direct and focused with time, rather than increasingly symbolic and impressionistic.

“The tinsel mammals were a more pointed moment for me—certainly memorable as something material, sculpturally speaking,” he says. “I didn’t even realize, at first, that I was making sculptures there, as that form is usually static. I liked exploring that, especially as I did so with my wife. There is a lot of interplay with our life at home and sharing studio space in work such as that.”

“The tinsel mammals were a more pointed moment for me. I didn’t even realize, at first, that I was making sculptures there, as that form is usually static.”

Lange is quick to add that it’s in collaborative efforts that his skills as a visual artist primarily shine, referring to his home-work life with Sword and his late-2000s project with artist David Ellis called Trash Talk. Lange describes those “sonic trash bags” made from tin, foam, and wire as “kinetic, rhythmic sculptures. It was finding trash on the street, along with their acoustic properties that could be triggered by electrical currents. It looked as if the trash was coming alive, the ultimate junkyard gang.” 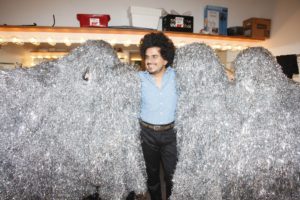 Lange’s 2011 commission from Flux Projects for a site-specific sound installation in the lobby of an Atlanta high-rise—called Sounding Up There, a collection of giant weather balloons and audio speakers—was all about responding to a specific atmosphere, “rather than, say, appearing on a stage and just performing,” as he puts it. Such thoughtful consideration to a room and its vibe, the textures and even the souls of its inhabitants, made every movement and noise more intense, pointed, and weightily conceptual. “The only nightmare was that we had speakers carried twenty feet in the air by helium balloons,” Lange admits good-humoredly. “It was beautiful, if not requiring a lot of maintenance.”

Lange mentions, too, that his most recent work has found him moving into the sculptural/dance realm of narrative storytelling (“Certainly, that is true of the tinsel mammals”). With that, he has a signature that is probably more stubborn and static as a musical solo artist—but more malleable and pliable as a collaborative visual one.

“I am way more aware of things catching fire now—hopefully, not in a literal sense—as a collaborative artist,” Negro says with a laugh. “I’m able to gauge myself and what I am truly about when in collaboration outside of a musical recording format. There is a specific goal in mind when I’m doing music. When I’m on the visual-sculptural performance tip, I just think it’s fun and willfully weird. You are making something that doesn’t exist in a normal setting. There is no format for something ‘normal,’ because there is no normal way to do it or look at it.” FL