The Babadook had his day in the sun; who’s next?
Menu

The Babadook had his day in the sun; who’s next?

Several years back, Netflix listed The Babadook under their LBGTQ menu by accident, and the internet took the mishap and ran with it. Jennifer Kent’s horror film centers on a single mother struggling to raise her son following the death of her husband, and when a scary figure called the Babadook emerges first in a starkly illustrated children’s book and then IRL, donning a top hat and and possibly press-on nails, the small family must try everything to expel him from their home.

Since this Babadook happened to be stylish and fierce and like, a little much, viewers likened his expulsion to their own experiences with homophobia and ostracism. Still others suggested the movie’s conclusion, wherein the Babadook is trapped in the basement and made to eat earthworms, mirrors the reluctance with which parents might tolerate their LGBTQ child’s sexuality.

Here are eight more horror movie villains who might actually be misunderstood queer icons in disguise.

Warning: there are spoilers for some of these movies here, so read carefully if you haven’t yet seen them. 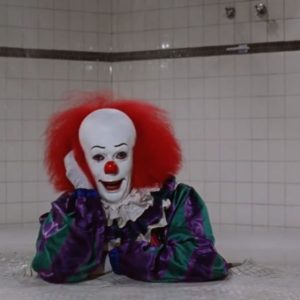 I’m ignoring the new movie iterations of It, which are objectively bad, to discuss this one that is technically a horror miniseries; but it’s only two episodes long, thus it’s pretty much just the length of a three-hour movie (Martin Scorcese, hello). In 1990, smarmy British legend Tim Curry gave a chilling if kitschy performance as the manifestation of everybody’s worst nightmares. Most memorably, Curry’s shapeshifting character took on the form of Pennywise, a pale clown with a mop of red hair and a demented grin. This guy could be a queer icon because he lived on the margins of society, he was known for his wisecracks and playful attitude (sometimes luring children to their deaths with charm instead of force), he wore bright colors and masterful makeup, and because a lot of people in a small town in Maine were afraid of him. 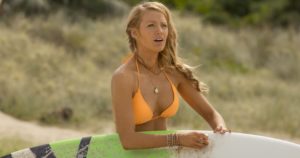 Shark from The Shallows

You could make the argument that this enormous Great White Shark starring alongside Blake Lively in 2016’s The Shallows just wanted to eat her. But think about it: that Shark devours a total of three other human beings and part of a whale carcass throughout the film, so it’s very clear he’s not hungry. The real reason he’s stalking Blake could be that he loves her blonde highlights. He needs to know her style secrets. He wants to be her new gay BFF. It’s a shame they never get the chance to truly bond, but what can ya do. Blake’s clearly a bigot. 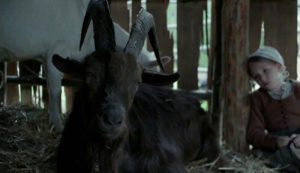 Black Phillip from The Witch

Black Phillip is a small but essential player in A24’s The Witch, a “New-England folktale” about some freaky stuff happening in early Puritan America. Phillip is a satanic goat who seems at first blush to be a mere farm animal—but soon reveals himself as so much more. Armed with a seductive voice, he assists an innocent young blonde in becoming the wild Witch she was born to be (the character eventually strips off her clothes and participates in a bonfire sabbath that involves levitation). BP has since become popular online, and he’s got more than enough pizzazz to make it to the cover of GQ someday. (Side note: The actor who voices BP, Daniel Wahab Chaudhry, is a working model.) 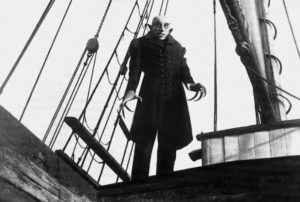 This is the vampire movie that started it all. Count Orlok is the O.G. bloodsucker, the title character of the 1922 classic German silent film Nosferatu directed by F.W. Murnau. Portrayed by Max Schreck and based on Bram Stoker’s Dracula, Orlok lives alone in a fancy castle in the mountains. He puts unsuspecting victims into a trance-like state (so he can suck on their necks) and sleeps in a coffin. But he can’t go into the sun, because he’ll vanish in a puff of smoke—like any self-respecting nightclub regular. Orlok wears a dignified coat with many buttons, has long impressive talons, and makes quite a few dramatic entrances. The evidence speaks for itself. 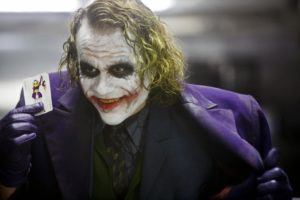 The Joker from The Dark Knight

Heath Ledger pulled off one of the best queer character performances ever in Brokeback Mountain, but his turn as The Joker in Christopher Nolan’s The Dark Knight deserves some love too. The Joker is an agent of chaos and malice, to be sure—but one could also argue he’s rallying against a paragon of dull heterosexuality and classic masculinity: The Batman. The Big Guy is boring and noble while Joker is devious, unpredictable, and OTT. Joker loves a bright red lip, purple suits, and isn’t afraid to do things his own way. 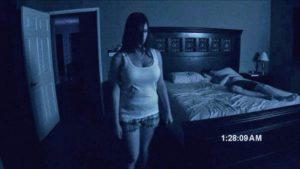 The PA in Paranormal Activity

The unnamed ghostie in this 2007 low-budget cult fav (that spawned a franchise of lesser films) is never glimpsed on camera, and that’s part of its coy appeal. Regular girl Katie claims she’s been haunted by the thing since childhood, but maybe the demon spirit grows more powerful than ever in the movie because she has moved in with her boyfriend Micah, and they’re having a kind of unhealthy (hetero) relationship. The dude basically gaslights her; he doesn’t believe in her ghost, he videotapes everything for “proof” even though she begs him not to, and he ends up making everything worse. The spirit probably just wants Katie to break up with the guy and get on with her life. Which she does, in a manner of speaking. 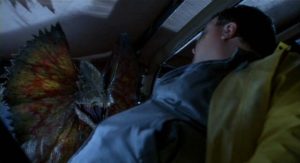 The Dilophosaurus from Jurassic Park

This spunky little dinosaur seems sweet when he first meets computer programmer Nedry, the greediest/sweatiest/least likable character in Spielberg’s Jurassic Park (Nedry is at fault for the power going out and the dinos wreaking havoc). When Nedry calls the Dilophosaurus “stupid” and tries to make him fetch a stick like some common dog, things take a turn for the deadly; Dilo takes swift revenge by puffing up his fabulous frills and spraying Nedry in the eyes with green sludge. Nedry is the kind of guy who disrespects anyone smaller than him, and he’s most likely homophobic too. Good riddance. 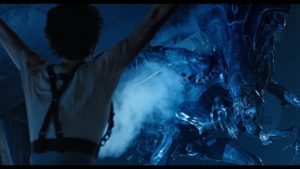 The Queen Xenomorph from Aliens

James Cameron’s Aliens is widely regarded as one of the greatest action movies ever made. Heroine Ellen Ripley (Sigourney Weaver) is already a queer icon in every sense of the term; but you know who else could use some spotlight? The queen-mother alien. Ripley famously screams, “Get away from her, you bitch!” at this Queen when she threatens a little girl named Newt. But that Bitchy Queen is simply defending her own eggs. With an elegant skeletal frame, dripping teeth, and sleek black armor, she gives Ripley a fair fight and looks good doin’ it.

Charlotte Willmore from The Perfection

In this 2019 Netflix original, inevitable horror legend Allison Williams (you may recall her icy performance as the two-faced GF in Get Out) plays Charlotte, a former cellist who befriends a slightly younger cellist; Lizzie, the latter, has essentially usurped Charlotte’s star role at a prestigious music school. The two girls have sex when they meet—which is obviously, technically, gay—but what happens next is what cements Charlotte’s status as more than a mere queer lady. In one of the year’s most shocking moments, Charlotte tricks Lizzie into hacking off her own arm with a meat cleaver. At first you’ll assume it’s a jealousy thing, but we later learn that Charlotte is actually trying to help her friend. They ultimately conspire to overthrow the music school’s male overlords, who are sexually abusing young girls. Their final cello duet is a lesson in teamwork, wearing jumpsuits, and revenge. 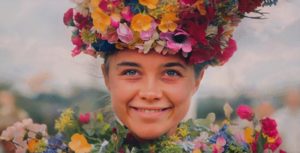 Have you seen Dani in that flower crown? Have you seen the delicious way she smiles after she approves the ritual sacrifice of her unsupportive boyfriend? Message received, Ari Aster: heterosexuality is a prison.