“Strange to Explain” is a confused swirl of hope, wonder, and melancholy.
Menu

“Strange to Explain” is a confused swirl of hope, wonder, and melancholy. 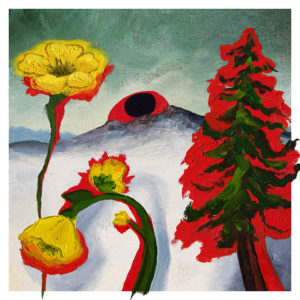 A lot happened to the members of Woods to influence the making of this eleventh studio album. For a start, vocalist Jeremy Earl became a father, and guitarist Jarvis Taveniere moved from Brooklyn to Los Angeles. The pair also worked together on David Berman’s Purple Mountains project—the last thing the singer, poet, and musician made before taking his own life. It’s no surprise that the eleven songs on Strange to Explain both capture and convey the wide range of emotions of those experiences—a confused swirl of hope, wonder, and melancholy, all set to the band’s now-trademark woozy melodies.

That’s not to say, however, that the band is treading familiar ground. Far from it. While these are recognizable as Woods songs, they’re certainly the Woods of now, and not of 2007’s debut At Rear House or its ramshackle late aughts/early ’10s successors—more confident, accomplished, and expansive than the lo-fi folk they made during this period, and which they’ve continued to build upon and evolve over the past decade and a half. Opener “Next to You and the Sea” immediately makes that clear with its layered instrumentation and appropriately breezy melody—one that evokes the openness of the ocean, the eternal ripples of endless waves, the way humans are so adept at hiding sadness instead of actually confronting it.

“Where Do You Go When You Dream?” has a similar carefree, West Coast vibe flowing through its veins, but one with a darkness just below the surface waiting to be sliced open and released. That’s true of most of the songs here—that despite the seemingly carefree nature of their form, they’re still slightly haunted, still unable to completely give into that feeling of joy. “Can’t Get Out” perhaps comes closest, but even the relative whimsical grooves of “The Void”—an instrumental interlude, replete with horns that pop up in the very middle of the record—can’t escape the shadows completely.

Elsewhere, “Just to Fall Asleep” could easily serve as a lullaby for any child (or, for that matter, adult) struggling to cope in these trying times; “Fell So Hard” is a desperate, mildly psychedelic attempt to hold everything together even as it’s unraveling at the seams; and “Be There Still” is a tender tune full of hope, Earl pleading “Can you come home soon?” to that one person who makes home home. All the way through this album, Earl’s voice is majestic and pure. There’s plenty of pain within its timbre, but it’s also healing—not just passively in and of itself, but also actively for the listener. That it’s not the last song is this record’s one misstep. Instead, it closes out with “Weekend Wind,” a hypnotic (but really more repetitive) instrumental that lasts more than seven minutes, but which adds little to what’s come before it. Still, Strange to Explain is another fine album from Woods, and one which opens the door for more growth from the band.