The group’s third effort for Saddle Creek is enticing, philosophical, and mysterious.
Menu

The group’s third effort for Saddle Creek is enticing, philosophical, and mysterious. 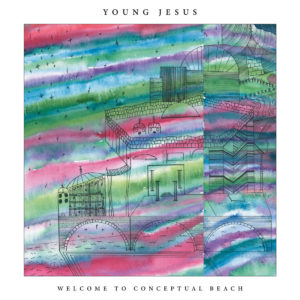 In the music video to “Root and Crown,” the introductory single from Young Jesus’s Welcome to Conceptual Beach, a woman goes about her daily life surrounded by pastoral greenery, drinking with friends, taking long walks through LA’s Echo Park, reading on the patio. Her days are continually interrupted by an unseen mysterious stranger who gives a gentle tap on her back; she turns around but finds that the stranger has disappeared.

Eventually she comes across a doppelgänger of herself laying in the grass. She bends down, taps her clone on the shoulder, and suddenly disappears herself. We’re left with her clone, who turns around. This was her past self, continually being reminded of the future while it slipped away from her. These moments—in which she turns around to gaze at the future fading out—flash past until we emerge out on a street, watching as she looks down at her hands as they slowly turn transparent. “What if living wasn’t of the mind? / The root and crown don’t doubt the winter time,” John Rossiter sings. She dances to the music, flouting gravity as she becomes one with the world again.

Young Jesus’s music on Welcome to Conceptual Beach is enticing, philosophical, and mysterious—and has been that way throughout their discography thus far, even before their transition from overlooked Midwest emo act to acclaimed LA art rock band. The transition was seamless and imperceptible: Rossiter’s Chicago past was suddenly rendered a passing note in reviews, something to learn and then forget. But I haven’t forgotten the ways in which being an emotionally potent, fearless, bitter songwriter in the Chicago cold have influenced Rossiter’s cosmic ambitions.

The tender emotions of “Pattern Doubt” and the mathematical rhythms of “Faith,” the unwavering yelps on “(un)knowing” and the ambience-backed lone guitar and voice of “Root and Crown”—these are the things that remind me of the best of Midwest emo and emo revival acts like Algernon Cadwallader, The Brave Little Abacus, and The Promise Ring; they also, of course, remind me of their own past work, such as “Chicago Alone Pt. 1” from their 2010 EP Young, Innocent, & Hairy and “Oranges” (as well as ambient cut “Father Son”) from 2015’s Grow / Decompose.

Perhaps this hasn’t been forgotten; after all, this recent interview makes thorough work of this information. But it’s not remembered enough, the debt that our contemporary era of art rock phenoms have to bands such as American Football and tracks such as “In Response to Irresponsibility” from Some Kind of Cadwallader. Rossiter’s past was phenomenal as well, and followed his heart closely. His aforementioned song “Oranges” mentions that “You can leave it all behind / Don’t you know that? / You can read it in the rinds / Don’t you know that?” The past, while swept away, can still be read in the orange rinds you peel away in the present.

Young Jesus’s present form is akin to Gabriel García Márquez’s short story “Very Old Man With Enormous Wings”—mysterious and angelic, flying out of sight just as it begins to be understood. Over time, their music has grown to be more amorphous and experimental, like Rossiter’s drawings of the titular Conceptual Beach, an imagined island asylum for the band. For any individual listener, some of these more formless sections will attach instantly—others may not; “Lark,” for me, did not. But such sections find themselves scaffolded up by deeply earnest songwriting, such as on “Root and Crown.” Then, “Magicians,” with its nearly mystical piano riffs, ends the album as the old man with enormous wings flies away.