In Conversation: Nate Wonder and Roman GianArthur on the Heartbeat of “Antebellum”

The composers of Janelle Monáe’s newest film discuss the project, as well as their origins in the Wondaland Arts Society.
Menu

The composers of Janelle Monáe’s newest film discuss the project, as well as their origins in the Wondaland Arts Society.

When Janelle Monáe’s horrorscopic, psychological thriller Antebellum was released last Friday, filmmakers Gerard Bush and Christopher Renz opened a barbaristic racism-driven can of worms that offered more questions than answers. Bouncing darkly between the past and the present, shape-shifting through uniquely Southern place markers and time frames, Antebellum looks at how Black America deals with true trauma, and what enslavement meant (and means) in a very real way when Monáe’s character is kidnapped and made to live as a slave.

To guide viewers through the time traveling of Antebellum, Monáe, Bush, and Renz welcomed first-time film composers Nate “Rocket” Wonder and Roman GianArthur to create a richly textural score piqued with organic and synthetic instrumentation and sweepingly dusky unobvious orchestration arranged for maximum unsettling. Though this collaboration marks their film debut, Wonder and GianArthur have long been comrades of the actress-vocalist as part of their Atlanta-based Wondaland Arts Society collective, with both architects creating production and instrumental elements for Monáe’s 2010 debut album The ArchAndroid and its succeeding The Electric Lady and Dirty Computer.

We caught up with Nate and Roman the day before Antebellum opened for business on VOD and streaming services.

How did you come to co-found the Wondaland Arts Society, and how do you believe its original values and intentions are upheld, or its goals changed?

Nate Wonder: The Wondaland Arts Society was birthed out of friendships established when Chuck [Lightning], Mikael [Moore], and I were in college where we first had a collective, The Dark Tower Project. We were based on an arts salon in New York from the first Black billionaire. Her daughter used to throw these parties in her mother’s building for all of the artists she knew. We based our salon in Atlanta on that, and from there, the Wondaland Arts Society was born. Our intentions, then and now, were to always enjoy, create with, and push each other—to develop art in all kinds of ways. That has remained the same. We try to figure out radical ways to create art. We love having big, spirited conversations around art and how to make it, and create it all in a very spirited way. We met Janelle very early in that process, and our work with her has had a similar trajectory.

Has the work of Wondaland always used Afrofuturism as its totem?

Wonder: I’d have to say yes. One of the first films we screened at the collective was Sun Ra’s Space Is the Place, then Sweet Sweetback’s Baadasssss Song. One of the key things that we talk about is how to make sure Black culture has a place in the future. That’s what Afrofuturism is really all about, making sure we have representation of ourselves in the future. If you don’t put yourself in the future, you won’t make it in the future.

“One of the key things that we talk about is how to make sure Black culture has a place in the future. That’s what Afrofuturism is really all about, making sure we have representation of ourselves in the future. If you don’t put yourself in the future, you won’t make it in the future.” —Nate Wonder

Roman GianArthur: Futurism has always been a part of my family growing up. My father is a futurist, looking to make students and student concerns a part of the future—in art, business, designing the technology that we need, the algorithms that we use every day. Before I got to Wondaland I was in school, on my own journey, traveling abroad. I fell into music—in my off time I was doing arrangements for a capella groups, directing choirs. My brother hipped me to some very different, very brilliant music coming out of Wondaland at that time. They were looking to do orchestral things, and I was very much a do-this-try-that guy. We would send things back and forth virtually, and I would go there during spring breaks. I wound up going on the road with them.

What is it that Janelle is doing that acts as a conduit for what the two of you do?

Wonder: Janelle’s ideas are limitless. She is so willing to stretch the bounds of anything that is happening. It gives everyone around her a different level of freedom, just by interacting. If it’s weirder, there’s a better chance of it happening—the freakier the better, the less scripted is most attractive. I remember first hearing her when she had some singer-songwriter acoustic stuff going on. Then, I played her some of the music that Chuck and I were working on—very punk. As soon as she heard this, though, she started jumping up and down on the couch, on the counters. What in the world was happening? I don’t know this person as well as I thought I did. 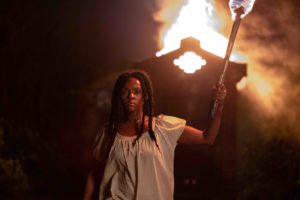 GianArthur: I had heard the stories when I first got here, but, then I went on a live promo run of, like, 200-seat clubs during the ArchAndroid release. Tiny clubs. She was a wild woman—throwing water at the crowd and kicking over musician stands. She really finds her footing in breaking down boundaries. When her back is against the wall, that is when you see that Janelle spirit come out. That resonates with her fan base, too—people who, like her, live life on the margins.

When I say the word, “antebellum,” what comes to mind?

Wonder: We both come from the South, so we have a storied history and understanding of what that word stands for. For us, it is the South’s obsession with racism, ownership of other people, the preservation of that.

GianArthur: To me, it means trying to code that obsession in beautiful language. The other day we were talking about going to the Dixie Classic, a grand fair. It never registered for us as kids that that word “Dixie” stood for things like cotton candy. When I played sports, it meant having teammates who had confederate flag bumper stickers. It’s just one of those things that the South is about. They’re obsessed with coloring over the brutality and the horror of what slavery was about.

What were your impressions from the first script read? How did the music come about?

“She was a wild woman—throwing water at the crowd and kicking over musician stands. When her back is against the wall, that is when you see that Janelle spirit come out. That resonates with her fan base, too—people who, like her, live life on the margins.” — Roman GianArthur

Wonder: We read the script and made most of the music before seeing anything they had filmed. When you’re reading a script, all of the shocking moments are even more harsh because you don’t have all of the visual cues to guide you through what’s about to occur on screen. It unveiled itself as challenging, interesting—just like, wow. We turned in some music that we had created early on, and they even used it to shoot.

Much of the movie harkens to the era of the Civil War, but you avoid the trappings of era-appropriate music and sound. What was in your head while working with the directors?

GianArthur: In terms of any of the direction that we got, the words they kept saying were “hauntingly beautiful.” Based on the three-act structure we saw, we thought it would be important to not lean too heavily into the era, based on the fact that the film jumps in eras half of the way through the film. To make sure that the sound and the textures, and most importantly, the main musical motif for Veronica, would be something we could revisit through the pieces of the film—and bring justice to the film.

Wonder: As we were reading the script we kept wondering, was this a drama or was this a horror film? Not having seen anything at that point, we thought that the more interesting angle was to paint this pre-Civil War era as a horror film, an angle that does not often get spoken out loud. Imagine waking up to the reality of slavery every day. That is horror. 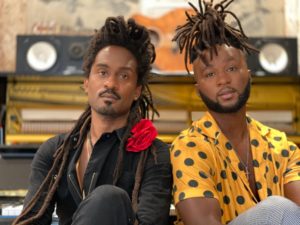 How much of this comes down to a term that Janelle is fond of using: the “emotion picture”?

GianArthur: It’s funny you bring that up. In terms of emotion, some of her and my early conversations around the time of ArchAndroid, even [her 2007 EP] Metropolis, was based on the fact that we wanted to make music that felt like a movie without the actual visual aids of being a movie. We made the music itself tell the story.

What was your approach to instrumentation and orchestration when approaching Gerard and Chris? The first death scene is particularly brutal—what was that discussion like?

Wonder: That’s one scene where they shot, in long tracking, to our music. They trusted our instincts. We trusted theirs. I mean, look at that last shot…what does triumph really feel like? Is it complicated, or straightforward?

Her victory is certainly bittersweet considering the torture she and her siblings endured.

“We thought that the more interesting angle was to paint this pre-Civil War era as a horror film, an angle that does not often get spoken out loud. Imagine waking up to the reality of slavery every day. That is horror.” —Nate Wonder

Wonder: The one instrument we felt comfortable with was cello—the human aspect of what cello brings to that composition is that it felt like a human voice, and was something to bring out the humanity of what was really happening. When people talk about slavery, they talk about slaves and slave owners. I think people miss what that really means: These are people who have lives—doctors, artists, scientists, mothers, fathers, people living their own lives only to have them pulled out from under them—all taken away from them by other people. It is human beings who are responsible for the fate of other human beings.

One of the other things about the word “antebellum” is that we’re trying to elucidate on the fact that right now, as we think about who has the power to make change or make right the system of inequality—to understand that at the center of all that, there are people who are making decisions about other people. There’s a responsibility for all of us to see that those are the right decisions being made. We are all accountable.

How do you feel as if your score is another character in Antebellum?

GianArthur: It came down to the sound of the outdoors, like this cicada sound. As we were fleshing that out, we noticed that its shush shush shush moved in waves and really spoke to the fact that the Black voices are being silenced, that they are being encouraged not to say anything, especially say anything to arouse violence. That definitely informs the emotion of the scenes. That’s still hard to watch, but it’s something that America—particularly that side who wishes to “make America great again”—is very keen to ignore. FL