In Conversation: Chuck D Is Rebelling Against America’s New Gridlock

The Public Enemy rapper expounds on America’s technological dependency and how people on both sides of the fence may be getting duped.
Menu

The Public Enemy rapper expounds on America’s technological dependency and how people on both sides of the fence may be getting duped.

Public Enemy tends to be both ahead of the times and right on time. The iconic rap groups became one of the genre’s most essential artists in the late 1980s with its pro-Black, politically minded message and mind-bending beats. In 2020, Public Enemy remains topically and sonically sharp, as the hot-topic messages in their music arrive with the type of urgency that is the group’s hallmark.

Released last month, PE’s new LP What You Gonna Do When the Grid Goes Down? finds lead rapper Chuck D in prime form. American society’s potentially dangerous addiction to technology is the running theme of the project, which also sees the group rework some of its best material with a star-studded guest list that includes Nas and Rapsody, as well as members of the Beastie Boys and Run-DMC.

In our Q&A, Chuck D discusses the way he would have liked to have seen Black Panther discussed, how the right-wing hate group Proud Boys are victims of COINTELPRO, and the meaning of Public Enemy’s new LP.

On the song “GRID” you talk about our reliance on the grid and technology. When I talked to you back in 1999 for There’s a Poison Goin’ On, it was about the benefits of technology and releasing an album on the internet.

Just be careful of your tool becoming a toy. I think that what Grid is trying to convey is using the platform to actually get across a question, “What are you going to do when the grid goes down?” Be prepared for government tricks going into this election. Prepare yourself against the whippings of mass distraction. So the song “GRID” is basically saying, there’s times we look at these things as wonderful tools instead of toys. But in the interim period from ’99 when we first interviewed about what was coming in place, you have people that wasn’t even born yet who have been born underneath the gadget.

If you’re zero to fifteen and you get a hold of a gadget or device, why wouldn’t it be a toy? You’re a child. The problem happens to be when it’s like, “How much do I wean off of it being a toy, and how much do I engage in it being a tool to work for me?” That’s the schism that I don’t think has been met in this society. We’ve crossed over and officially become netizens with no clear ushering into that mode. If anything ushered us into the netizens era as the default, it was the pandemic, which basically said, “Stay in the crib. Don’t go nowhere. Use your internet to connect with each other.” To handle that much power, that most population engaging on the internet all at once, the circumstances of what’s 4G, all that’s still not clear yet ’cause that didn’t go down. But what are you going to do if it does go down and you still have to abide by your citizen rules and laws that say you’ve got to stay inside? 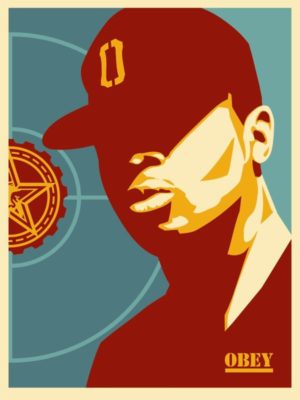 It wasn’t blanketed across everybody as individuals with them all having their own take on it all at once. It was broadcasting, but when you turned on a radio it was casted to everybody. Now everybody’s engaged on their phone, but they can make individual decisions. But they also think they’re engaging themselves with something they can’t see. You could be following something that has already programmed you into making a decision. The United States right now is being thrown with an A and B, so you’ve definitely got to clarify and define an A and B like I clarified in the voting process. If you’re Black, just dealing with Black people, it’s like it’s the side that you’re on versus the side that hates you. It’s as simple as that.

The tipping point was George Floyd. It’s like, “OK, another page of names that didn’t get clearly answered to a society of why they did die or got killed by police with no retribution or with no punishment or penalty whatsoever.” Whatever that punishment and penalty would ever be for police, we don’t know. But for authority not to say, “My bad, our fault, how do we actually fix this?” That’s a little bit derogatory. It’s not even being addressed. That, I think, is what was the final turn off for the young people that said, “We’re not going to have it no more.” When you have a president at the top that says that, “Yeah, you might be stepping into your locale, but if you take down any one of those monuments, even if those monuments are saying ‘fuck you,’ I’m going to give you a ten-year bid.” That’s a slap at your existence.

That’s the unfortunate and horrific reality of our country’s arbitrary enforcement of the law. There’s supposed to be one set of universal rules, but they’re not enacted equally—they’ve never been.

We are also reaching a schism where those who know sometimes feel like they’ve got to conceal their knowledge and those who don’t know are sometimes speaking out. They might have the energy and excitement about it, but they’re not equipped with the knowledge, wisdom, or the understanding to make a statement of fact. Look at the Proud Boys. Half of the Proud Boys, I promise you, don’t think that they’re racist. They’re also victims of following a lot of derogatory images of people of color that probably are not true, that are probably concocted from somewhere else. If anything, the Proud Boys are victims of COINTELPRO, because they believe in half the bullshit that Black folks are mad at.

That ties into one of my favorite lines on an album, on “Fight the Power: Remix 2020,” where Rapsody notes how we love Black Panther but not Fred Hampton. When you heard that lyric, what did you think?

With the murder of Fred Hampton, it’s a fact that it was done by the feds or police in that locale. Black Panther is fiction. It’s a good feeling, but it’s fiction. The Black Panther Party is real—we got to know the difference. If you follow Black Panther as a fictional movie or comic book, it should be a great introduction. There’s just not going to be enough inertia to be able to make it precedent like, “Boom, yo, this is where Black Panther comes from. This is Stan Lee, this is Marvel. This is not real. Fred Hampton was real. Fred Hampton was murdered in Chicago. He was a 20-something-year-old activist who made things happen for real, for people.”

You always have to have an education in society when you start throwing images and symbols out there. Even commodities like films and music, they always gotta be great curators. I think it’s not enough for curators in positions where they could curate and narrate the amount of content flying at people at faster speeds than ever, the amount of symbols that are hurled around and floating right in front of our face.

But there’s other symbols that are out there getting pumped like crazy. There’s the God Bless America symbols being pumped in the United States and over the rest of the world at an unbelievable speed and rate. This is almost like why you can’t knock scholarship, or tenure, or historians, because readers and scholars gotta digest the history they don’t want to read. Then they read what they know they have to read in order to debate with themselves. I spend the time reading what I want to read and what I like to read and things I’m engaged and interested in. Scholars really don’t do that. A scholar—a true scholar—has got to go through the bullshit.

If not, that’s dogmatic. That’s some of the things that religion and corporations and branding have triggered, where it’s like, “This is the United States of America and nowhere else on the planet counts.” “But how many countries are there?” “215, but they don’t count. This is where it’s at. Of course we’re the biggest.” It wasn’t the biggest. When the United States of America detaches itself from the rest of the planet, that’s a problem that’s going to manifest itself.

Unfortunately. If a person of color doesn’t attach themselves to the rest of the planet, how are you going to get a GPS on how to handle what’s in front of you? Especially when you can learn from older civil civilizations, history, or about other places, your own family line. There’s a lot of things you can learn from. You just go blind on it and figure it out, that it’s going to get better just ’cause it is. Black folks that detach ourselves from the diaspora automatically find problems that we can’t get out of because there’s answers for what we see, and what we’re in the middle of. Rhetoric that flies around and says, “Yo, man. I’m ready for war.” You don’t want war. FL