Bruce Springsteen, “Letter to You”

Though recorded in a pre-pandemic setting last winter, “Letter to You” feels unusually safe.
Menu

Reviews
Bruce Springsteen, “Letter to You”

Though recorded in a pre-pandemic setting last winter, “Letter to You” feels unusually safe. 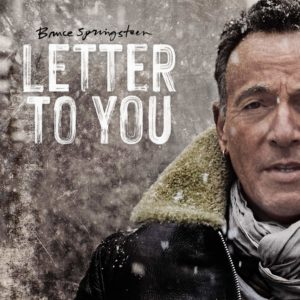 Letter to You
COLUMBIA
7/10

In Bruce Springsteen’s black-and-white Letter to You on Apple TV+, a documentary that drops the same day as his new album of the same name with the (unbilled) E Street Band, there’s a vibe to the cool proceedings that’s both touching and gently funny, but oddly off for this familial crew. Not unlike the scripted reality of Springsteen on Broadway—an autobiographical talk-show-and-tell showcase that found the Boss speaking from the same scripture every night, rather than offer anything off-the-cuff—the documentary is poignant, providing nicely planned portraits of familiars reaching deep into their long-shared relationships. And certainly there’s a wisened vibrancy to not-at-all teen men and woman brandishing guitars, huddling together in close-knit quarters, making music that Springsteen scribed quickly after too long of a dry spell, away from the E-Streeters. Yet the dedicated pre-planning that made filming a documentary in close quarters a reality often creeps into Springsteen’s new album in disappointing ways.

That isn’t to say Letter to You isn’t dashing, clever, or light in Springsteen’s usual rousing rock ’n’ roll gospel of love and uplift among the ruins, or that it doesn’t find the songwriter at his most ruminative. The new album doesn’t lack in personal, elegiac, or sentimental storytelling—in that regard, Letter to You embraces some of Springsteen’s most intimately idiosyncratic lyrics. It’s just that for a new album that was recorded in a few days, live, with few overdubs, there’s something raw and impromptu missing that shouldn’t be. Though recorded in a pre-pandemic setting last winter, Letter to You feels unusually safe.

For that warm, clear, and safe sound, I blame Ron Aniello, Sprinsgteen’s choice in co-producer. Brendan O’Brien recorded both the Wall of Sound–surrounded Magic in 2007 and its pillowy 2009 follow-up Working on a Dream, and gave each fluid epic a punchiness that propelled even the softest elements into something jarring. Ever since 2012’s Wrecking Ball, however, Aniello has chosen to blunt much of Springsteen’s knife-like edginess—even in what should have been the raw and meatiest bits of Letter to You.

The title track, for instance, may allow Bruce to yodel and croon cleanly, and there are more than a few E Street signatures to be found—the snap of Max Weinberg’s snares, Roy Bittan’s pointed piano statements, a Duane Eddy–esque hollowness to the guitar—but I wanted to feel something more potent in the production, something heavier and dark. Same goes for “Ghosts,” a rattling rocker whose melody lifts incrementally higher with each stanza and chorus, but whose production could use something more haunting in its execution. On “House of a Thousand Guitars” I wanted to sense the potential danger of a thousand entangled six strings in one home shaking the roots to its foundation. At best, it felt like maybe three guitars in a New England cottage.

Even when using its most somber, unified tones, a rush of acoustic guitars, and a synthesizer’s sheen, B & the E’s find something worth making rough music for. When Springsteen’s gritty voice confesses, “Baby, baby, baby, I’m so alone / Baby, baby, baby, I’m coming home” during “One Minute You’re Here” there’s a sense that its writer is gutted and done, coming home only as a last resort. The aforementioned “Ghosts” may be one of Springsteen’s finest melodies, propelled by a noble backing ensemble and lyrical renderings of what it means to have those you’ve lost remain in plain view. On “Last Man Standing,” Springsteen may muse sadly on the topic of mortality by looking at old photographs of “when you were hard and young and proud.” Yet as the one still standing, he’s joyful and gets that he has a job to do—keep on, tell the stories, live to play another day.

Some of those stories recount the teariness of hearing and believing your first love songs, as Bruce does on the gentle “The Power of Prayer,” when he recalls Ben E. King and the Drifters’ “This Magic Moment” with the exaltation “I’m reachin’ for heaven, we’ll make it there,.” There are character studies with guardian angel–like guile and heroism, such as “Janey Needs a Shooter” or the carny-filled “Rainmaker” that could be tied, metaphorically, to the mad goof currently in the White House and how our future can’t wind up like our present.

No matter what happens, or who’s in office, or how many guitars are in that house, it’s like what Sprinsgteen sings on the album’s final track, the jittery folky “I’ll See You in My Dreams”: “Death is not the end.” And for all of the rumination that fills Letter to You—whether it’s remembering the souls of the gracious departed, such as Clarence Clemons, the Jersey shores of yore, or the clown we have as President—there is always a tomorrow, if only we make it right.