Jeremiah Sand, “Lift It Down”

The “Mandy” tie-in record convincingly blurs the line between truth and fiction with songs that, on their own merits, are actually pretty cool.
Menu

Reviews
Jeremiah Sand, “Lift It Down”

The “Mandy” tie-in record convincingly blurs the line between truth and fiction with songs that, on their own merits, are actually pretty cool. 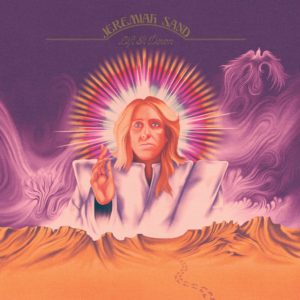 Lift It Down
SACRED BONES
7/10

Jeremiah Sand is not a real person. He’s a fictional cult leader played by actor Linus Roach in the 2018 Nic Cage film Mandy. Lift It Down, so the story goes, is an album recorded by Sand and a varying number of his troupe—his “Children”—over a number of years. One night in 1977, however, Sand “heard a calling and a Great Summons” and departed with his disciples the next day. Before he did so, the master tapes were secured in a lockbox and the producer of the record was told that Sand would one day be back to finish his masterpiece, and that the box shouldn’t be opened until then.

In 2018, however, the Carr wildfire (which were very real) decimated the town of Redding, CA, burning everything in its path except one stone structure which just happened to be the studio (not real) where Sand made his album (both real and not real). In the wake of the fires, the lock box containing the master tapes was discovered and the recordings mysteriously made their way into the world.

It’s an elaborate set-up of almost Andy Kaufman proportions, and one made all the more so because no one actually knows who Sand is. In 2018, Roach assumed the character and released two songs on Bandcamp as a promotional tie-in to the movie. Is Roach behind these eight songs? Possibly. Possibly not. Does it even matter in this post-truth, quasi-dystopian world? Not really. Interestingly, given these songs are meant to be—and certainly sound like they are—over forty years old, they provide an appropriate soundtrack for 2020 and beyond.

The title track and opener is a morbid, messianic sermon that’s equally unsettling and intriguing, drawing you immediately into its world and making you forget that it’s all fake. It doesn’t sound fake. In fact, “Message From the Mountain” and the “There Was Once a Man” sound more authentic (and authentically hippyish) than half of anything Anton Newcombe has ever made with the similarly minded Brian Jonestown Massacre, while the messy, twisted psychedelia of “Golden Fervor” is truly the sound of a cult leader losing his mind. Closer “Taste the Whip” is one step further down the road of that insanity—a sound collage of confused, misfiring synapses. Perhaps as a result, it’s also the most infuriating, grating song here.

All of it is, of course, one big gimmick, but it’s hard to deny that it’s a successful one—whether that’s in convincingly blurring the line between truth and fiction, or just making songs that, on their own merits, are actually pretty cool. And there’s the rub—these songs, on the whole, are good enough to stand alone without their context. Yet without that context, they wouldn’t exist. Does that matter, and does it matter that they’re fake? The answer, it would seem, is probably not.