The War on Drugs, “Live Drugs”

The songs on the group’s first live album sound more lush and textured than they do on their recorded counterparts.
Menu

The songs on the group’s first live album sound more lush and textured than they do on their recorded counterparts.

The War on Drugs 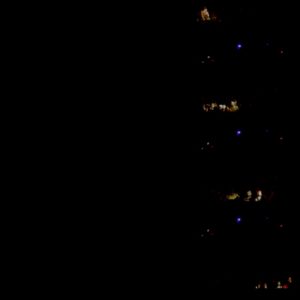 In September 2014—back when he was merely a cantankerous musician and hadn’t been accused of sexual misconduct, harassing music journalists onstage, or anything else worthy of populating his Wikipedia “Controversies” section—Mark Kozelek took issue with The War on Drugs. The Red House Painters/Sun Kil Moon songwriter was playing (billed as the latter) at the Ottawa Folk Fest at the same time as the Philadelphia band, becoming irritable due to the fact he could hear them. “I hate that beer commercial lead-guitar shit,” Kozelek announced onstage. “This next song is called ‘The War on Drugs Can Suck My Fucking Dick.’” It wasn’t, of course, but Kozelek did later record and release a track called “War on Drugs: Suck My Cock”—an explication of a band he publicly described as sounding “like Don Henley meets John Cougar meets Dire Straits meets ‘Born in the USA’–era Bruce Springsteen.” He’s not wrong. That’s exactly what The War on Drugs sound like. But, as Kozelek also said, that’s “not a criticism, it’s an observation.”

That’s something that this, the band’s first live album, only confirms. Spliced together from performances between 2014—when they started touring for that year’s breakthrough third album, Lost in the Dream—and 2019—before the coronavirus pandemic took its devastating toll on the music industry—Live Drugs makes these songs sound even more lush, textured, and, yes, 1980s than they do on their recorded counterparts. In fact, there’s a depth to these recordings that’s rarely found on actual studio albums, let alone live ones. Just listen to the melancholy, heartwarming chug of “Strangest Thing” and its explosive yet muted beer commercial lead-guitar shit, or the dreamy skygazing of crowd favorite “Under the Pressure,” which is extended to almost twelve minutes and is full of both more vitality and vulnerability—especially in singer Adam Granduciel’s weathered, husky vocals—than it has on Lost in the Dream.

In fact, while the band can sound rather one-dimensional on their actual albums at times, here, songs like “Pain,” “Red Eyes,” and “Thinking of a Place” all bloom into full, unrestrained life. And while their cover of Warren Zevon’s “Accidentally Like a Martyr” can’t match the haunted-heart majesty of the original, it comes pretty close. Unlike most live albums, then, which tend to be geared toward people who are already fans of the band, Live Drugs actually serves as a decent primer for the uninitiated. And it certainly shows that Kozelek probably should have just kept his mouth shut and listened. He might have even enjoyed himself.