The Tool and A Perfect Circle frontman and bandmate Carina Round talk the band’s latest record, “Existential Reckoning.”
Menu

The Tool and A Perfect Circle frontman and bandmate Carina Round talk the band’s latest record, “Existential Reckoning.”

Anyone convinced of Maynard James Keenan’s greatness when it comes to his exacting brand of art-damaged music and refrigerator-magnet prose knows that the singer, screamer, and writer has had a great couple of years. Starting with his gauzy alterna-rock act A Perfect Circle’s Eat the Elephant in 2018 and the ice-cool metallic Tool’s first new album in thirteen years, Fear Inoculum, in 2019, Keenan’s once-humorous, now-not, skronk-and-synth-driven Puscifer released a new album, Existential Reckoning, back on Halloween of this year. Here, Keenan—with this current round of Pusciferians, including fellow vocalist Carina Round and multi-instrumentalist Mat Mitchell—looks to the Fairlight and the allure of ’80s synth-phonics for its present day castigation of man and machine.

The new Puscifer album is solid, and even steely soulful in a Devo-meets-Blade Runner fashion. With Maynard in Arizona, and Round in Los Angeles, we made our best attempt to learn more about the new album, as well as Maynard’s process balancing each of his outfits.

Is everyone in Puscifer insular enough that being sequestered from the world and each other isn’t soul crushing?

Maynard James Keenan: Everybody’s safe. We’re pretty cautious when we’re together. This is the type of project that thrives in a situation like this.

This version of Puscifer is different than the ones that recorded previous records. What is the trajectory of this particular ensemble and its work?

Keenan: A lot of it just comes down to the moment where you’re at—where our collective heads are at. When it comes to Puscifer’s trajectory, some of the goals are motivated by the stimulus of what’s in front of us. What we’re going through, the equipment, the creaks in your body, age, wisdom. All those things. If you’re asking if there’s a master plan that we wrote up twenty years ago? No.

“When it comes to Puscifer’s trajectory, some of the goals are motivated by the stimulus of what’s in front of us… If you’re asking if there’s a master plan that we wrote up twenty years ago? No.” —Maynard James Keenan

Of course not. Who would write up such a thing so long ago?

Round: When it comes down to it, we’re making the record based on the circumstance that we’re in. We have a studio in LA, and I just spent a lot more time in that studio due to what’s going on. Based on what music Mat came up with to start on…everything stemmed from that. It’s an organic thing.

The first two albums seem to be based on a more purposeful sense of humor, whereas the last two…well, they’re more serious-minded. Can you describe that headspace?

Keenan: I was just reacting to what Mat put in front of me in a folder. As far as headspace? That’s hard to put a finger on. It’s really just reacting to sound, the moment. The song. Anything now is hindsight.

Round: The lyrics are down to Maynard. Everything else is just instinct. Each of us is reacting to what the other person is doing, and then reacting, instinctually, going back and forth between us. Either peeling away the layers or adding layers on. We’re just absorbing the world around us as artists. Maybe we just got more serious. 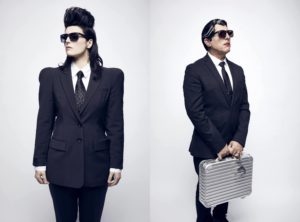 Keenan: I don’t know that I see that we got more serious. Maybe it’s logistics. Example: The first album was recorded while we were on the road with Mat as a tech for one of the other bands. We recorded it in hotels, the backs of buses, and in dressing rooms. Logistically speaking, recording in hotels, you’re just a wall away from people, and you don’t wish to disturb strangers. You notice, there, that so many of the vocals on that first album are lower register. That’s because I wasn’t screaming in my hotel room—an absolute logistical reaction to the circumstances that we were already in.

In the last three years, each of your bands has released a record. Are you writing and filing away things for each ensemble—are you compartmentalizing?

Keenan: No, they’re all just separate conversations. You don’t have files in your head as to what you might say while visiting your aunt as opposed to your old friends from college or your drinking buddies. The conversations just happen. You don’t check the folder, categorically, when you meet those people. It’s just the conversation that happens in those dynamics, in those circumstances, with the stimulus presented with the people in the room.

Yes, but when you’re in those situations, are there different ways you present yourself?

Keenan: I use the blue microphone with my blue headphones…just reacting, sitting in my writing space. Creating the words that go with the sounds, because—structurally—the melodies, rhythms, and vocal limbs are written first to go with music, and then I attach stories once everything else is in place. Every single project. Every song. FL