In Conversation: Claud Unlocks the Power of the “Super Monster”

The 21-year-old turned two years of songwriting into a powerful LP about surviving heartbreak and reconciling the hero and the monster inside everyone.
Menu

The 21-year-old turned two years of songwriting into a powerful LP about surviving heartbreak and reconciling the hero and the monster inside everyone.

When Claud first laid eyes on a Daniel Johnston drawing called “Claud and the Super Monster,” something clicked. Here was a descriptor to apply to the eclectic nature of not only life and relationships, but to the varied and wide-ranging music the bedroom-pop artist had been working on. The debut album from the 21-year-old now had a name: Super Monster.

Claud may be releasing their debut album this week, but they’re certainly not new to writing music. In the nearly two-year process of creating Super Monster they wrote close to fifty songs to potentially use on the album. The resulting thirteen-track album is as close to an encapsulation of their journey and sound as they can get: Sunny pop melodies live alongside rock ballads and horn sections, all chronicling the rise and fall of relationships and Claud’s journey of self-realization, merging traits good and bad into a “Super Monster” in full understanding of themselves and their sound.

Claud already has some pretty notable fans, with Super Monster serving as the first release on Phoebe Bridgers’ label Saddest Factory. Claud sat down with us to discuss what the “Super Monster” is, fitting their journey into just thirteen songs, and working with one of the fastest rising stars in music at the moment.

I read that you found Daniel Johnston’s painting and it spoke to you. Can you elaborate on what about that concept sparked something with you?

I really like the duality of it because it reminds me of “superhero” but then also “monster.” It just got me thinking, sometimes your best traits are your worst traits, nothing is black and white.

You had somewhere near fifty songs written when you started working toward your debut. How did you go about paring down that list to the thirteen tracks on the album?

A lot of the songs just felt like part of the journey, and I knew they would never really make it on the record. Picking the thirteen songs came down to which of these tell the story the best. And which ones aren’t redundant, because I tend to write about a lot of the same things and I don’t want to tell the same story over and over. It was about perspective, and it also came down to maturity—like, do I even see this like this anymore? Because the oldest song is two years old and the newest song is six months old, so I had to decide, “Have I grown past this person who wrote this song two years ago?”

When you did get down to those thirteen, how far along were those songs?

It depends on the song. Some songs I completely reproduced, or I got help in completely reproducing them. I didn’t change a lot of songwriting, but once I picked the songs I ended up changing a lot of production just to make them feel a bit more cohesive and to put my own touches on them. I really got pretty hands-on with production in the final few weeks of the recording process.

“The oldest song [on Super Monster] is two years old and the newest song is six months old, so I had to decide, ‘Have I grown past this person who wrote this song two years ago?’”

There’s a lot of different influences on this album, from funk to pop to more psychedelic stuff. How did you handle that production process to get them cohesively into one project?

A really important thing for me was making sure that, yes, the project was cohesive, but that any song on it could be a single, every song could stand by itself strongly. There are no songs that only make sense in the context of the record. I tried not to focus too much on making it sound like one thing—I really like to embrace the fact I can make lots of different sounding songs.

A lot of this album is about how messy life and relationships are, and all the jumbled feelings. What was it like for you processing that messiness through your music?

I try not to think about it when I’m writing [laughs]. A lot of times when I write something I’ll be like, “Whelp, I have no idea what that was about,” and then a few months later I’ll look back and think, “I know exactly what that was about.”

The album art is a self-portrait. Have you always been into visual arts, or is that something you started exploring while making the album?

I got a lot more into it a few months ago when I was making the visuals for the record. I like drawing, I do it a lot—not ever really seriously, just sketches and for fun, but I guess this was the first time I was seriously trying to make something.

What was your approach to making the more visual aspects of the album?

It was different for each song because every video I’m going to do for each single is super different. The first video we did was for “Gold,” and in the past the only music videos I’ve ever made were with my friend from high school. Her name is Christina and she’s made all my music videos for the last two years, and I really trust her vision. I told her, “I want to look like this monster character,” and I made the green and blue jumpsuit that I wore in the video, then I was like, “But you take the reins, what do you think?” For the next video, “Soft Spot,” me and Phoebe had a lot of back and forth on that video and we came up with the moving truck concept, then we found the right director.

“I love Dead Oceans and all the music they put out. It just felt right, and I really like having an artist on my team because Phoebe is able to see the industry from a perspective that a lot of A&Rs can’t.”

Speaking of Phoebe, you’re the first release on her Saddest Factory label. What was that conversation like when they first approached you?

It was really cool. I was already talking to Secretly Canadian, I had been in conversation with them for a while. When Phoebe joined the conversation everything sort of clicked and I could really see myself on their label. I’ve always been able to see myself as a part of that label group—I’ve been a fan of that label since high school, and I love Dead Oceans and all the music they put out. It just felt right, and I really like having an artist on my team because Phoebe is able to see the industry from a perspective that a lot of A&Rs can’t.

What are one or two things you learned from making your debut album that you’re going to carry forward?

Oh my god, so many things. I think one thing that really helped Super Monster come together was I didn’t have the mindset that I was making an album. I just had the mindset I was writing songs and documenting my life. That’s really what it is, it’s like a document and a collage of the past two years of my life, and I think that’s how I want to approach the rest of my records. This is an album, but it’s not one month of my life, or it’s not two months in a cabin trying to write all these songs, this is a collection of songs I’ve written. I don’t stop and start writing, I write every day and it’s all piling up. FL 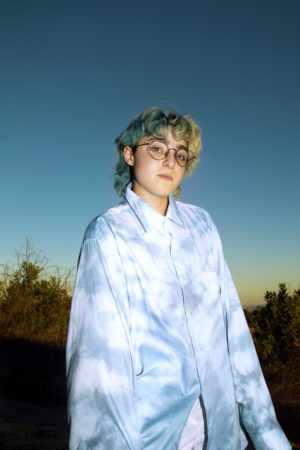