On the Road (At Home) with iDKHOW’s Dallon Weekes

Dallon Weekes is vacuuming. “Somebody’s gotta do it,” he says over the phone while at home in Salt Lake City,…
Menu

Dallon Weekes is vacuuming. “Somebody’s gotta do it,” he says over the phone while at home in Salt Lake City,…

Dallon Weekes is vacuuming. “Somebody’s gotta do it,” he says over the phone while at home in Salt Lake City, Utah, with his wife and two children. Weekes is still riding out the pandemic storm while trying to maintain an immaculate home studio.

Several days earlier, Weekes, one half of the indie-electronic duo iDKHOW (a.k.a. I Don’t Know How But They Found Me), was walking through Kilby Court’s emptied space for FLOOD’s “On the Road (At Home)” series. The all-ages indie venue in Salt Lake City is where it all began for Weekes—it’s where he had his first live show with his band The Brobecks, with one of their stickers still plastered among the countless band names on the venue’s exterior, recalling CBGB’s once graffiti- and sticker-clad interior walls. 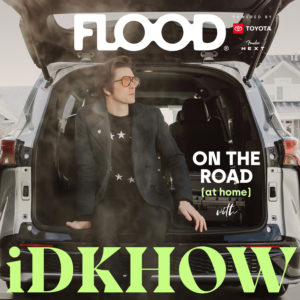 Weekes, who along with his other musical half drummer Ryan Seaman, recently released iDKHOW’s debut album Razzmatazz, had just popped into June Audio to record a few songs for Instagram Live. It’s been some time since Weekes has had time to revisit some of his old haunts, grab a quiet contemplation at Utah Lake, or traipse through Gilgal Sculpture Garden, a hidden enclave originally designed by Thomas Battersby Child, Jr. in the 1940s, featuring more than seventy stones engraved with various poems and scriptures, and twelve original sculptures—there’s even a sphinx.

“It was nice being able to wander through parts of the city that have basically been shut down for this whole year,” says Weekes. “These are some of my favorite places, the places that I go when I’m home, so that was nice.”

Relocating to Los Angeles during his tenure as Panic! at the Disco’s bassist from 2009 through 2017, there was something missing, but being back in Salt Lake City these past three years has been creatively centering for Weekes.

“For me, it’s home,” he says. “It’s a place where arts and music are created with this sincerity that, at least in my experience, I haven’t really found in LA. A lot of times there’s this ulterior motive when people are making stuff. They want to be rich or famous, or whatever it is, but here in Salt Lake, it’s a really underrated town when it comes to art and music. It’s filled with artists who are making this stuff just because it’s in them, and because they need to, not necessarily because they want to be a rock star or whatever.”

Weekes adds, “It’s a city that a lot of people overlook, and it’s more progressive than it’s given credit for. It’s definitely a little blue island surrounded by a sea of red, but Salt Lake City, and Provo as well, are filled with people who are just making art for art’s sake.”

Before moving back to SLC, he was piecing together songs he had been creating since 2016 before trickling out the project that became iDKHOW’s first single “Modern Day Cain” in 2017. In the beginning, “I Don’t Know,” a Weekes-approved abbreviation of the band’s interminable name, was their dirty little musical secret since he and Seaman were in their respective bands when they started conceptualizing iDK—Weekes with Panic! and Seaman as drummer for Falling in Reverse from 2011 to 2017. 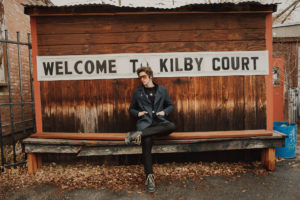 Now, with everything out in the open, iDKHOW finally filled an electronic void. Razzmatazz is a perfect indie-glam-pop synthesis sputtering around a digitally maddening world opening on the synth-soaked “Leave Me Alone,” a punchy ode to intentional social distancing from dysfunctional relationships, with Weekes spurting out the lyrics “Big shot, so what / So you want to pretend / You took the money / But the money couldn’t buy a friend… They say the devil that you know is better than the devil that you don’t / You’re a big shot here, but nobody else knows.” Weekes recently released  a re-recorded version of the track from his June Audio in Salt Lake City, along with a more stripped down rendition on piano.

“Here in Salt Lake, it’s a really underrated town when it comes to art and music. It’s filled with artists who are making this stuff just because it’s in them, and because they need to, not necessarily because they want to be a rock star or whatever.”

Throughout Razzmatazz, Weekes and Seaman remained sync’d through some Kraftwerk-ian, pop world, from an apocalyptic blip where humans are being replaced by machines on “Mad IQs,” through the sincerely crooned “Nobody Likes the Opening Band” and slightly sinister robotic voices infiltrating “From the Gallows.” More lovelorn balladry of “Clusterbug” and “Need You Here” and sweeter slips of synth on “Sugar Pills” and “Lights Go Down” all lead to the more orchestral movement of closer “Razzmatazz.”

Recorded at Pagzilla Sound in LA over three and a half weeks in 2020 and produced by Tim Pagnotta, Razzmatazz was subsequently mixed via email, then delayed because of the pandemic. “Eventually it was like, ‘Look, we just got to put it out. We’ve been waiting for so long. If we wait any longer, I’m going to actually go insane,’” says Weekes. “So we just pulled the trigger on it.”

Initially, iDKHOW was built around songs that Weekes was experimenting with before sharing them with Seaman to add drum parts. Now that Weekes has purged all those earlier sounds from his system, he’s collecting new ideas involving Ryan with the process much more as a writer.

“I’ve been sending him ideas, and we’ve been sending things back and forth and starting to collect ideas, not really in a focused sense, but more like broad strokes, to see if there’s anything in the ether that we like, and want to pursue for a follow up,” says Weekes.“It used to be that you would write songs on the road. Everyone had a phone in their hand, you would record everything that you do, then develop songs night by night. Now it’s a little bit different where you piece things together in the studio, and then you can sort of figure out how to play them live.”

Rehearsing at home, Razzmatazz has had a chance to breathe more throughout the past year with Weekes toying with variations of songs to switch things up each night should touring start up again. 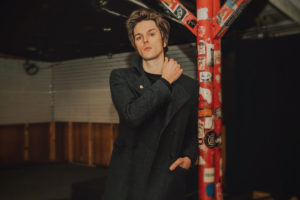 “It’s one that’s definitely left me wide open for a lot of things that are new for me as far as being a songwriter exploring ideas and experimenting with things that I haven’t tried before, which is something I always wanted to do,” says Weekes. “I never want to have to do the same thing twice. I’ve noticed that I do have certain proclivities when it comes to songwriting, so I’m trying to break away from those habits and really try to focus on doing new things and stepping out into the water a little bit more so my toes aren’t touching the bottom, if that make sense.”

Recently reminded that it’s been more than a year since iDKHOW played their last live concert, opening for Angels & Airwaves at The Pageant in St. Louis, the absence of performing live hit home for Weekes. “I was a little bit depressed that day about not being able to be on stage and everything,” he says of their last pre-pandemic show on December 16, 2019. “But you look for the silver linings wherever you can. For me, the biggest one is that I’m here with my family, and this is the longest time that I’ve ever been able to be with them in the past decade or so, so that’s the upside for me.” 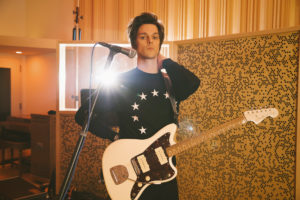 Still early in the process, Weekes is basking in the afterglow of Razzmatazz, a long road for he and Seaman, who had to keep I Don’t Know a secret at first.

“It’s definitely a weight off of our shoulders,” says Weekes of the revelation. “I think both of us were in pretty similar situations—in bands that were certainly successful in their own right—but we didn’t have a voice of our own, so to be able to finally have a green light to be creative without restrictions or rules or anything, and just be able to be ourselves and play the kind of music that we enjoy, it was a huge blessing.”

“I think both of us were in pretty similar situations—in bands that were certainly successful in their own right—but we didn’t have a voice of our own, so to be able to finally have a green light to be creative without restrictions or rules or anything, and just be able to be ourselves and play the kind of music that we enjoy, it was a huge blessing.”

With iDKHOW, Weekes says there’s more musical freedom, particularly under Fearless Records, which gave the duo 100 percent creative control. “Being able to have that freedom with nobody interjecting themselves into your ideas and watering down the message is so hugely invaluable to me,” says Weekes. “It’s been a great experience to be able to work that way.”

For Weekes, it’s both a privilege to still appeal to a certain demographic of listeners and a prerogative to take iDKHOW in whatever direction he and Seaman want without any repercussions. “You do want to make a career appealing to certain demographics that are always kind of scratching at you, but I played that game for such a long time. Being around the part of the industry that treats music and art like a commodity—like it’s Coca-Cola or something that you manufactured—is just something that I was never ever interested in.” 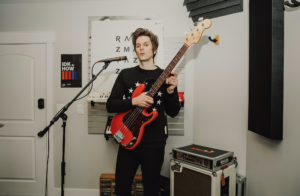 Still home for the unforeseeable future, Weekes says his eleven-year-old daughter Amelie is showing an interest in music, recently picking up the ukulele and cello, and he’s happy to show her the ropes if that’s a life she ever decided to pursue, which was never an option for him when he was younger.

“When I was a kid, pursuing music and playing guitar is not something that I was encouraged to do. It was really looked at as a waste of time, and you’ll be a drug-addicted, scumbag. That was the view of my parents back in the ’80s, because bands that were popular back when I was seven and eight were Mötley Crüe and Guns N’ Roses, and that’s what rock and roll was.”

He adds, “But I grew up more in the in the ’90s and the music heroes that I looked up to, even if they did have their own problems, they weren’t glorifying them. They weren’t promoting any sort of lifestyle. They were just making art for art’s sake.”

Art for art’s sake. It’s what Weekes and Seaman will work to maintain with iDKHOW, and there’s more music in the work, but first things first—Weekes still needs to finish cleaning the studio. 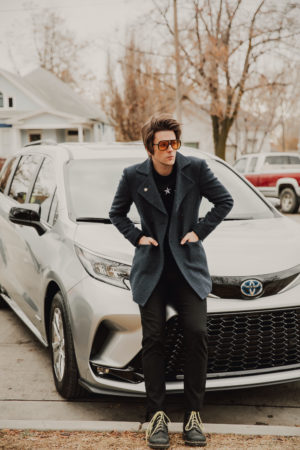