The EP feels more like a party with friends discussing the nation’s state of shock than it does a staid studio session.
Menu

The EP feels more like a party with friends discussing the nation’s state of shock than it does a staid studio session. 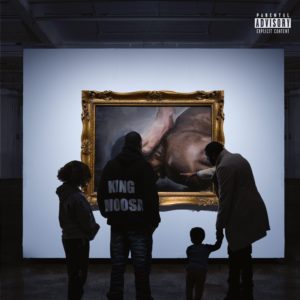 To be all things Vic Mensa means continuing on in the traditions of his Ghanaian roots in sociopolitical activism and all of its twists and rhetoric, to maintain a flow as liquid as it is fiery, and to craft an equally incendiary body of work where phrases are buoyantly bent like Beckham and each syllable is savored like fine wine. More often than not (he’s got one full LP to his name, 2017’s The Autobiography), that means cramming all of Mensa’s thoughts and deeds into smart EP/mixtape form, this time in connection to his fellow Chicagoan Chance the Rapper, producer Just Blaze, and the legendary Wyclef Jean. With that, I TAPE feels more like a party (albeit, a political party) with friends conversing about the state of shock that is the nation than it does some staid studio session.

“There’s a war going on outside / That nobody’s safe from / But here in my arms, I’ll keep you from harm,” goes “Shelter” at its start, heating up the rippling rhythmic affair. Finishing up the frenetic track is a line of reasoning that’s as righteous as it elegantly constructed: “Who do you call when the ambulances don’t come? / Or watch as the ones sworn by law to protect us / Wrongfully convict us, then call the corrections / Next, they bail the banks out when we in recession / Or hang us in a jail cell so they could swing the elections.”

Together with singer-songwriter Tish Hyman, Mensa moves, in sing-song-y fashion through the pop-hop of “Millionaires,” finding empowerment, enlightenment, and all manner of highs in all the right places. “Everybody noticed that I was super bogus / Couldn’t afford a Ford but I was super focused / Trappin’ out my momma basement, was baggin’ eighths then / Maybe I’d get my own place if I could get some placements.”

For all the insight into insight (“Victory”), and all the love of language that vibrates with the sound of its own rich voice (“Moosa”), the most impactful track on I TAPE is one that dabbles in Mensa’s African roots in word and rhythm. That would be “Fr33dom,” in duet with Zacari, and a song that manages to dime out, and rhyme—in this order—karma, Buddha, Bambaataa, Hakuna Matata, piñata, and Hugh Masakela, all while playing, and paying their proper respects. And with that, respect to Vic Mensa. Again.