In Conversation: The Prodigy’s Maxim Presents His Prodigious Talents in the Visual Arts

Art & Culture
In Conversation: The Prodigy’s Maxim Presents His Prodigious Talents in the Visual Arts

The name The Prodigy carries with it the awe of early British EDM’s bold mix of spiky electronics and the aggression of punk rock, with every recording and video of theirs appearing to be ripped from the band’s collective loins. Despite the passing of its spikiest member, singer Keith Flint, in 2019, The Prodigy remain an active and incendiary force—and not just in music and film, with new efforts coming forth on both fronts (including a documentary scheduled for release later in 2021). No Prodigy member is busier and more multifaceted across differing genres and aesthetic values than its other vocalist, Keith “Keeti” Palmer.

Known as Maxim, Palmer’s talents in multimedia art forms, including sculpture, have long been on display for audiences through Europe and Great Britain. Then there’s “Hope,” a new aesthetic project combining mixed-media sculptures and an installation exhibition devised with fellow artist Dan Pearce, and which also features a fresh solo EP release and short film due shortly. “Hope” is available worldwide, beyond its initial VIP viewing at London’s 99 Projects Gallery and Event Space.

Inspired by the ideals of hope that carried the public through the pandemic of COVID-19 and the quarantined social isolation, there’s something ferocious in the sculptures’ portrayals of children, gas masks, and hand-grenade hearts (see below). And while “Hope” sculptures came with bespoke memory cards containing the four-track Hope EP, the project can be fully appreciated online and visually as part of Maxim’s Instagram and his website with the music to be made available via streaming services—all at a time when the world slowly returns to normalcy.

We spoke to Maxim from his sculpture digs in London.

The Prodigy came about in 1990, and I think you’ve been responsible for much of its latter-day graphic display. Has visual art and music always been at work for you simultaneously?

I got into art about 18 years ago. I’ve been involved in music a lot longer than that. When I first got into art, I went under the pseudonym Double M, because I thought you had to keep them separate. It’s a very funny thing in the U.K.—a lot different to the U.S., at least. When you try to do two or three things in the U.K., people say, “Well, you can’t do that, you can only be good at one thing.” I deliberately kept them separate: Maxim, and Double M. More recently, however, it came to a point where I just thought, “You know, it’s just me, and people must accept that. This is what I do. I’m just a creative spirit, and I create.”

“When you try to do two or three things in the U.K., people say, ‘Well, you can’t do that, you can only be good at one thing.’ Recently it came to a point where I just thought, ‘You know, it’s just me, and people must accept that. This is what I do. I’m just a creative spirit, and I create.’”

Do you find that you compartmentalize inspiration, influence, and concepts for each medium, or is it a free flow of ideas?

It’s just a free flow of ideas. Once I start the process of creating art, then I normally stick to that style or genre. Whatever I’m doing, I normally stick to that for a short time until other ideas grow out of that. It’s like planting a tree: you have to plant a seed, and then fruits bear off the tree, and the fruits are each individual painting in that category. So when I start painting, I don’t know what I’m going to start to do. I just like to get into that zone. And whatever happens, I just let it happen naturally. 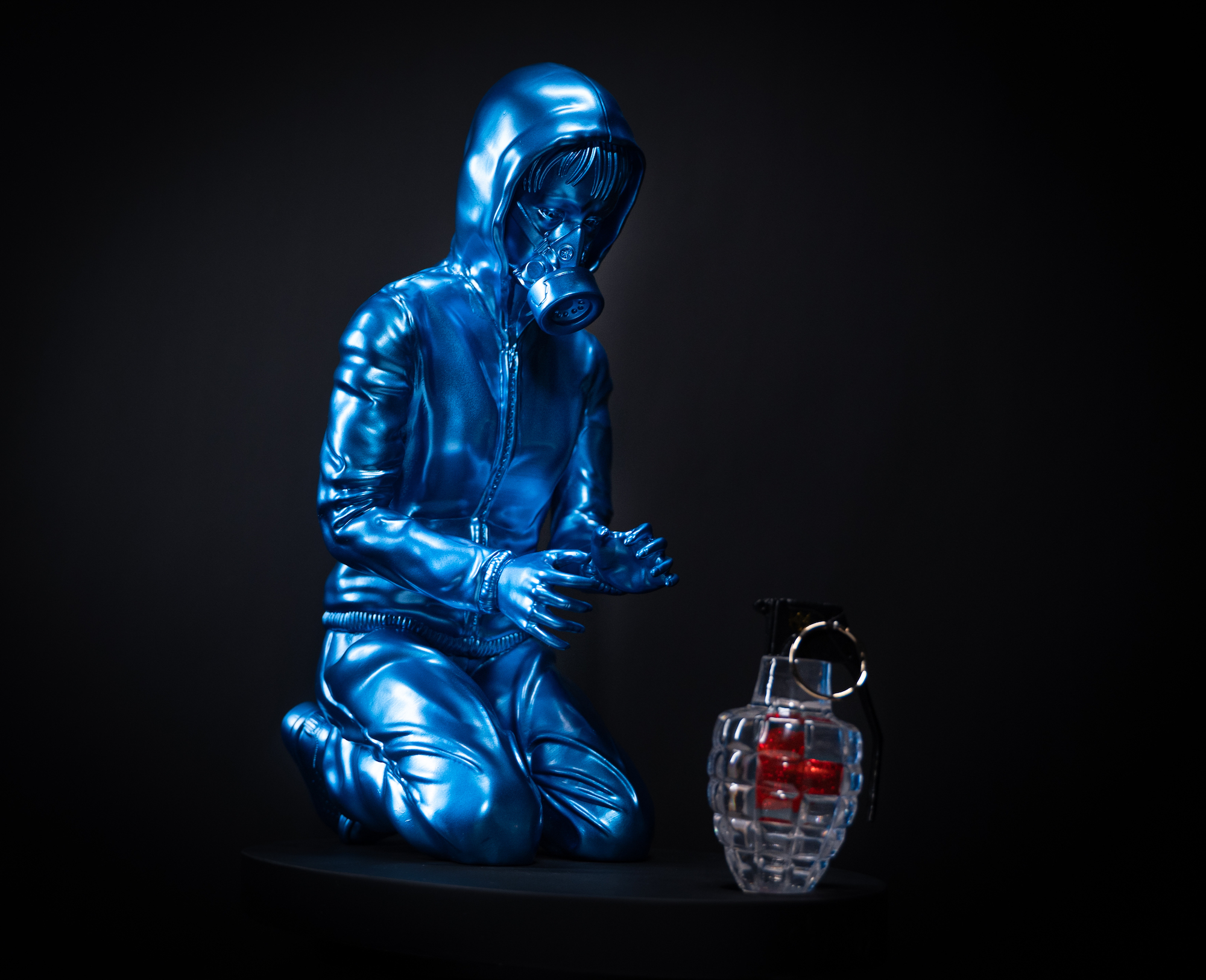 Tell me about the use of grenades. That motif runs through your work like blood and water.

A grenade is used in wars, signifying destruction. I think I was just sitting down one day and I thought, “Why do you throw a grenade? You throw a grenade to kill, destroy something you don’t like, something you hate, and want out of your way.” So, that’s what a grenade does. Then I thought, “You know what, why not take it out of its context of what it does and put a heart inside it? So when you throw that grenade, you’re actually spreading love, and not destruction.”

How and why was “Hope” borne in collaboration with Dan Pearce?

I’ve known Dan for a couple of years now. I went to a few of his exhibitions. He came over to my house, we just hung out and were talking about art and both realized it would be good if we did something together, collaborate. And that was it, we just started. Four months after that, Dan sent me some drawings of some ideas he had for a sculpture. We messed around with different ideas, back and forth, and came up with the idea of this concept of a boy. I mentioned to him, the grenade—that it would be good if the boy was reaching out for this grenade. Then it really grew organically from there—it wasn’t something forced, the ideas just came. Dan knew a friend he sold a painting to who was a film director who then offered to make a film for that. 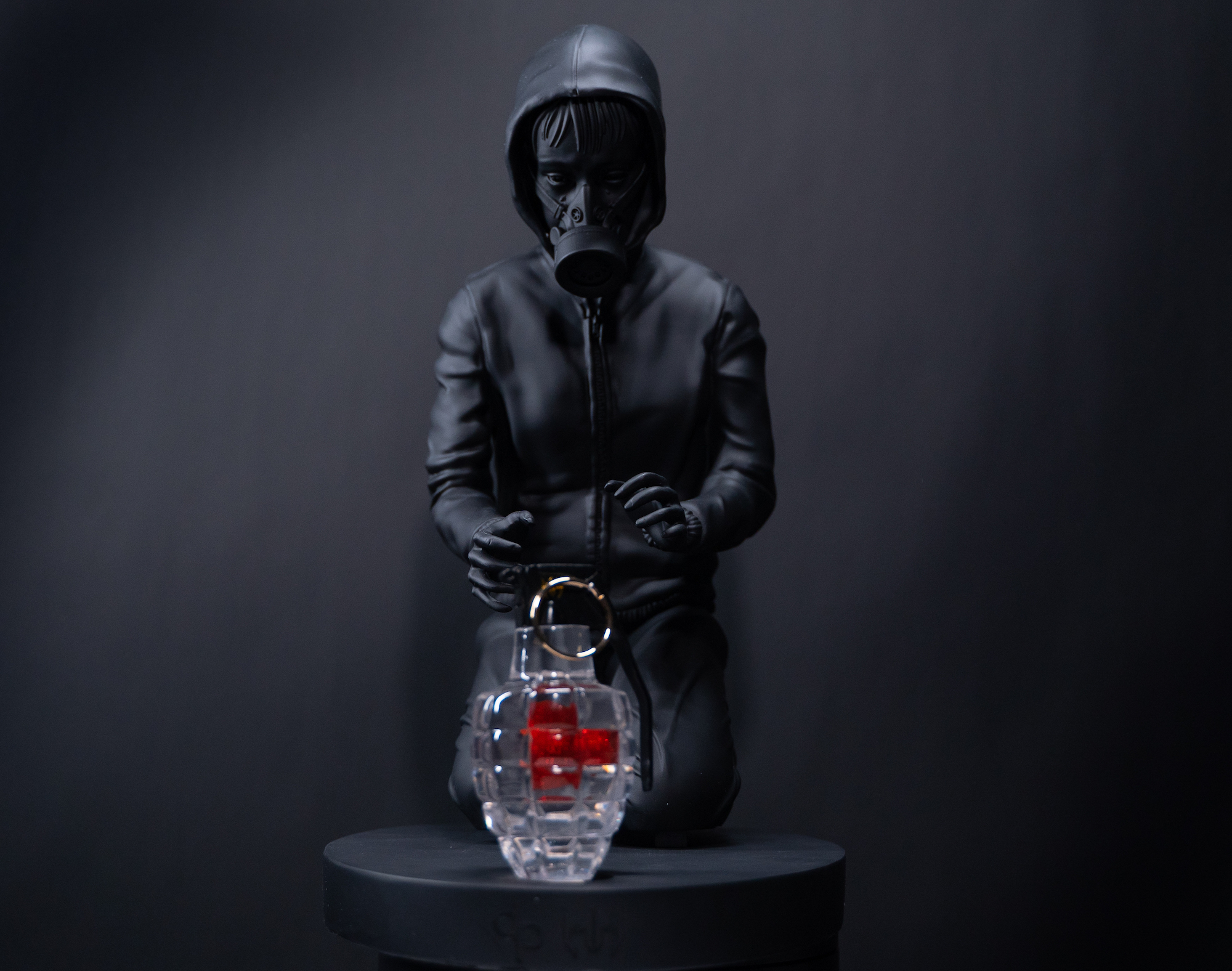 The short film looks as if, from its start, it moved beyond the concept of hope in a post-pandemic setting—that during the process, some sort of universality blossomed.

While we were filming it, we realized it touched on so many different aspects of our lives and what was happening around us—everything from children’s mental health to homelessness and the National Health Services. All these things were in the film. And we didn’t even realize how much of an impact this film had, what we had accomplished between the sculpture and the film, how immersive it was. It wasn’t just an art piece, but actually a sculpture with depth to it, about this boy who was going through this journey and who met this tramp, a guy down and out. This guy gave the boy this box, and he’s seen what’s in this box—it’s a grenade.

And all the noise of the chaos is going around, the sirens, the chitter-chatter, the news talking about deaths and COVID and so on. And then it’s just pure silence. It says “vaccine” on the box, but the whole concept is that it was about a bit more love in society—a bit more care for your neighbors, a bit more understanding—that goes a long way for helping young kids get through their situation.

Why did the materials that you and Dan used for “Hope” best speak to the topic, the emotion?

When you see the sculpture, you understand what the relevance of the film is. They go hand-in-hand, really. It’s a really weird thing, this whole art piece. Then there’s an EP, which I’ve done for every sculpture. Nobody else is doing this in art. I haven’t seen any other art pieces with this domain where you actually get a sculpture and it’s got a memory card. And it’s got a four track EP, which is music for that sculpture. And obviously, one of the tracks is the soundtrack from the film, which is on the memory card as well. So it’s totally exclusive to the people who buy the sculptures—those tracks won’t be released for months. The fact that you can actually physically have something—which isn’t just something on your computer, which you can’t download… 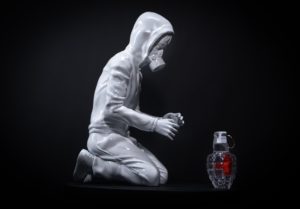 I get that the sculptures are a child holding a grenade with a heart tucked into it—can you discuss its forming, the idea of building something from real life, and breathing an emotion such as hope and trust into it?

I’m not a potter or anything like that, it’s not me down by myself sitting behind a random wheel and molding this thing up in clay. Obviously, with technology and the way things are today, you can put your ideas into practice. It’s almost like you can write a good song, but it doesn’t mean you’re a good singer—so what you do is you get someone else to sing it while you stick to your strengths, what you’re good at. And if you’re not good at singing, you just bring those people in that are good at those things.

“While we were filming it, we realized it touched on so many different aspects of our lives and what was happening around us—everything from children’s mental health to homelessness and the National Health Services. All these things were in the film.”

So the sculpture isn’t actually physically made by us, we’ve got people who actually made the 3-D cast, then we get it molded. But Dan and I put the thing together, spray-painted it ourselves. More than anything, I like the experience of people receiving the goods which we produce. I like the whole experience—getting it in a black flight case, cutting the foams the sculpture sits inside. You’re getting an experience from the beginning of the purchase to the end, where you place it on your wall.

The Hope EP and short film touch on the ramifications of mental health—a necessary part of the artistic dialogue at present. What can you tell me about expanding this concept into musical and cinematic form?

The thing with the EP is I did write the music, but I didn’t want to make it too somber. And so it’s still entertaining, and still light-hearted, and still the listener can bawl without being too sad. But the music is a reflection of the film. And the bonus tracks feature music that’s uplifting, about standing up and looking to the future, so to speak. I think the music and sculpture represent a point in time where people had to triumph over adversity. Hopefully, people will look back in 10 years and see that it was a traumatic time, but that we lived through it—we had hope and we made it. FL 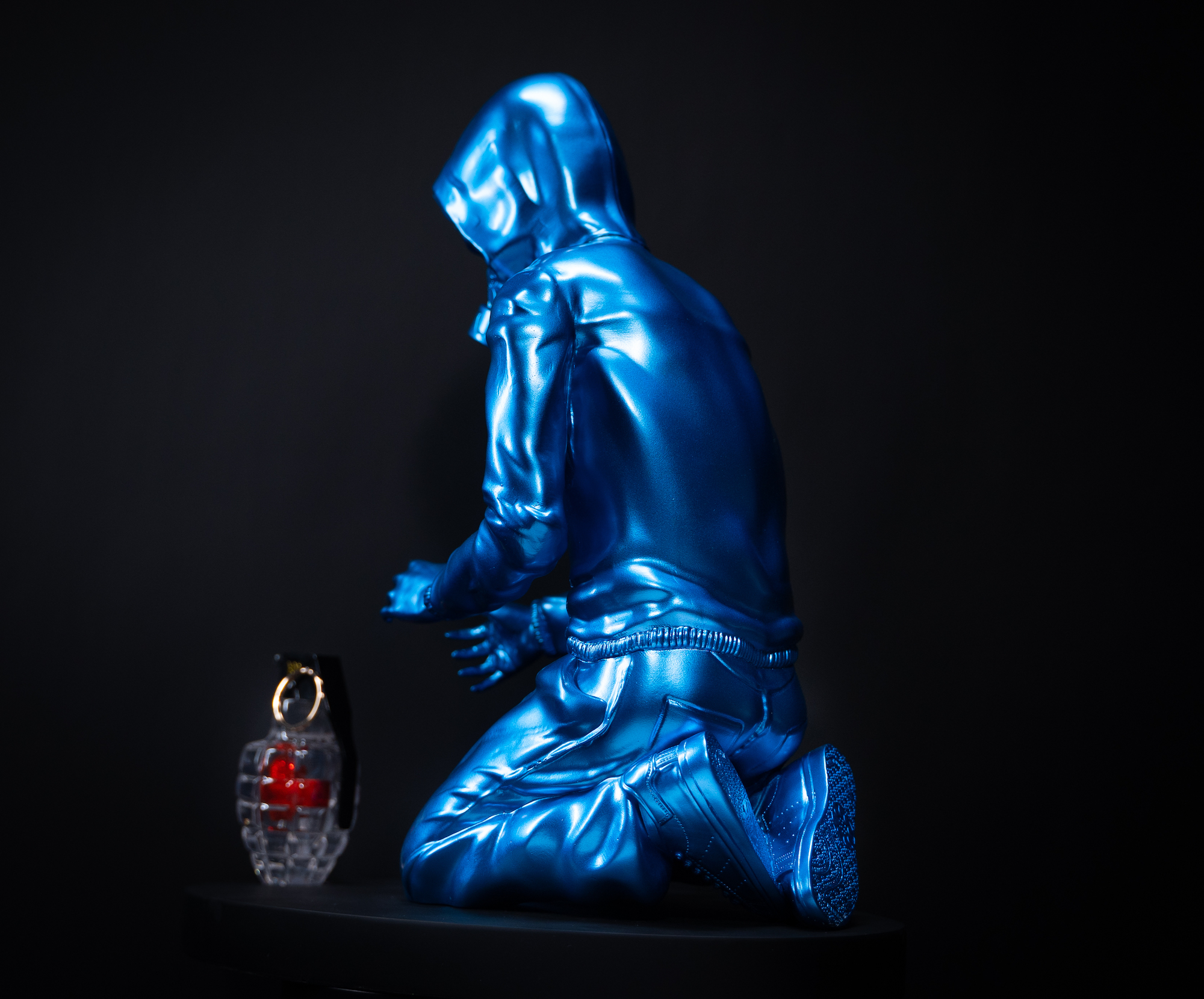