In Conversation: BbyAfricka Leaves Sad Songs Behind on Her New Two-Part LP “BigAfricka”

The Inglewood artist has graduated from somber “alternative R&B” to assured rapping—and people are starting to notice.
Menu

The Inglewood artist has graduated from somber “alternative R&B” to assured rapping—and people are starting to notice.

It’s already been quite a career for her. She started writing poetry in high school, got into modeling, released what she calls an “alternative R&B” project in 2018, and is now rapping alongside one of the most popular rappers of the moment in Saweetie.

In our Q&A, BbyAfricka discusses the two parts of her new album, learning from Saweetie, and how one of her songs was a surprising source of inspiration for one of her fans.

The “Baby Mama Coochie” video’s got an old school living room feel—how did that idea come to be?

That’s just how it kind of ended up being. When I booked the studio for the video, there was a bunch of different sets inside of it. So that one was just more fitting [for what I wanted to do with the video]. That one looked the best to me.

I enjoyed the Slick Rick reference you had in there.

Thanks, that was added literally the day before the video. I was in the studio that day from, like, 8 p.m. to 8 a.m. the next morning. So right after that studio session, I had to go do the video. I’m a fan of Slick Rick, but I was just trying to get more creative with my wordplay so I had to get that in there.

Speaking of that, how do you balance talking super sexual versus having clever rhymes in your material as well?

You gotta mix them both in there. It’s not really important, but that’s just usually how my lyrics are, they’re pretty raunchy. But you can’t just be talking sexually and then have nothing that people will listen to. [You want them to] smile, like, “OK, I get that reference.” I try to keep it more than just sexual, definitely.

“That’s just usually how my lyrics are, they’re pretty raunchy. But you can’t just be talking sexually and then have nothing that people will listen to. You want them to smile, like, ‘OK, I get that reference.’”

Why is that something you enjoy rapping about?

I gained a following first from Twitter, saying crazy things. So that’s really how people know me, as a wild card just saying, like, you know, whatever. That’s just a part of me, honestly.

“Baby Mama Coochie” also features Saweetie. What have you been able to learn from her?

Her being somebody that’s signed to a label, I’ve definitely learned things about how that goes, because I’m not signed to a label. That’s probably what I learned most, just little things that I should be wary about if I were to sign. It kind of gave me a taste, how things work, ’cause I had no idea on how things are going to be like.

Your new cut is called “Young Thug.” What made you want to name your song after him?

I’m trying to channel Young Thug in his Barter 6 era. This is the first song I did when I was playing with my tone. Usually I like a higher pitch and some tones. I don’t really like Auto-Tune—any time I did it, they didn’t put it right and I just sound like DeJ Loaf or something. That’s not what I wanted, so I found somebody who did it right. I was playing around the studio and I was like, “Oh, OK, I like this.” So it’s definitely something new for me. 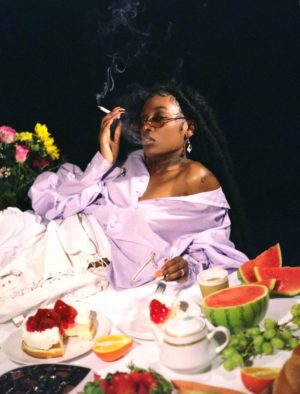 You’ve also done some modeling. How did you end up getting into that?

The very first shoot I did was through a photographer who was a family friend. Everybody would tell me that I should model ’cause I’m tall and skinny, but it was never anything that I was really passionate about. I just kind of did it for money and to get my name out there, and to build from there, like a stepping stone. I was doing little photo shoots for free, and then I eventually was just posting them on Instagram. Then I was actually getting booked and paid to do things with a lot bigger names.

Why did you break BigAfricka into two different parts?

I’ve been sitting on this album for a long time now, honestly, maybe a year. I want you to be able to hear my growth in my artistry. So BbyAfricka is going to be all of my older songs from when I was first starting to rap and learning my sound. Then BigAfricka is all of my recent things that I’ve done. So you can definitely hear the growth. I want you to make sure you can tell which one is which.

“I wouldn’t say the sections of my new album are completely different from each other, but there’s definitely a difference between the BbyAfricka and the BigAfricka ones. You can definitely tell that I’ve found my sound now compared to my older things.”

That makes sense. Your 2018 project Brain Damage sounds nothing like what you’re doing now.

So how do you compare the singing you did on Brain Damage to the rapping that you’re doing now?

I actually started off rapping, but I would just be playing around. I took singing more seriously because I couldn’t really rap, so it would just sound like I don’t even need to be doing this. So when I actually try to think of clever things to rap, then I was like, “OK, yeah, singing’s outta here, I’m done with that.” I don’t really like my singing songs, honestly. They’re too depressing and really sad. I don’t really listen to them. I’m done with that chapter of my life. 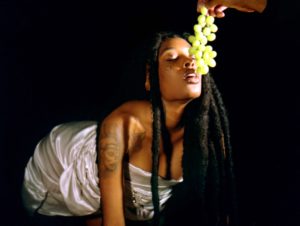 It’s interesting you bring that up because Brain Damage is full of sad songs, but “Baby Mama Coochie” features you being confident, brash. What was going on at that time in your life when you made “Hurt,” “Psycho,” and “Memories” that isn’t going on now?

How did becoming a mother affect your life and your outlook on things?

It changed everything completely, how I think. Thanks to Shavo, my baby, for being here because then I wouldn’t have done “Baby Mama Coochie.” The last song I did when I was pregnant was “Downtown & Cigarettes.” That’s my most played singing song that I have. I think a lot of people were probably feeling exactly how I was feeling when I wrote it. It’s about not being in a good head space, not in a good place with their life, or they’re just not happy. That’s how I felt, but a lot of people tell me they like the song, that it helped them get through things that they’re going through and helped just have a different outlook, I guess. I don’t understand it because when I listen to it, it makes me more depressed. I don’t know. If it helps people, I’m glad that I can do that for somebody instead of making them sad. FL 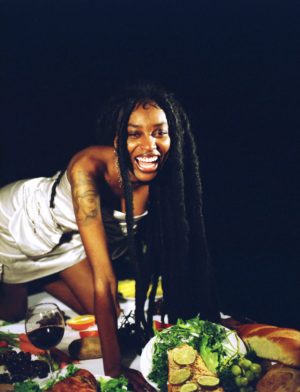