How “gimmick” films like “Tangerine” and “Victoria” provided Janicza Bravo’s new movie the shorthand needed to make it great.
Menu

How “gimmick” films like “Tangerine” and “Victoria” provided Janicza Bravo’s new movie the shorthand needed to make it great.

photos courtesy of A24

2014 was the only year I kept up with film enough that I was regularly checking reviews on the weekly onslaught of new releases. I remember it was this year because the word “gimmick” came up a lot in negative write-ups of the movies I wound up really enjoying—the single-shot gimmick of Birdman, the shot-over-the-course-of-12-years gimmick of Boyhood, and the shot-on-an-iPhone gimmick of Tangerine come immediately to mind. It’s hard to say how much of the animosity these movies faced was linked to their hype (quite a bit of that can accrue over the course of a dozen years), but it’s hard for me to wrap my head around the thought process that leads someone to think these devices weren’t used to expand the ever-tightening constraints of what film can be during a period when the fear of “gimmicky” filmmaking exists on one end of a very small spectrum opposite the legitimate concern that every new movie is a sequel, a remake, a cash-grab novel adaptation, or, as is most often the case, a Marvel production.

It isn’t that odd to me that audiences and critics would take any opportunity to dunk on a unique title in a medium that has seemingly only recently embraced the industry-wide gimmick of allowing more than, like, two movies to be directed by anyone besides a white man per year. But it is odd to me that audiences and critics would specifically try to blame innovative ideas for dragging down an otherwise interesting story, especially when that idea’s been used to some degree of success before. There seems to be an unspoken understanding among certain cinephiles, for example, that Russian Ark did the one-shot thing first, so it doesn’t really need to be redone; yet, heading back to the mid-2010s, I remember thinking the application of this idea to the action genre in Victoria, a movie that makes a full and unexpected transformation from a slice-of-life comedy to a white-knuckle crime drama without blinking even once, would open all kinds of new doors. I suppose it did—it’s just that nobody’s walked through them yet.

Zola could certainly be said to be a “gimmick” film. Adapted from an epic tome of tweets worthy of a Rolling Stone profile and an A24 co-sign, if not a Pushcart Prize, the movie leisurely stretches a cinematically chaotic Twitter thread into a feature-length run time while hardly leaving any room for fictionalization. It’s embellished with a Mica Levi score that feels inspired by the nu-quirk of Tierra Whack, while director Janicza Bravo cites The Garden of Earthly Delights as visual inspo—yet it’s the recent developments in gimmickry that elevate the movie beyond novelty item, unforgettable characters, and impeccable vibe. It isn’t shot in a single take, but it seems to draw heavily from the realism and oh-shit plot developments of Victoria, which dramatically reshape the tone of that film. Similarly, it isn’t actually shot on an iPhone like Tangerine, but in addition to pulling from a similar color palette to Sean Baker’s movie it does its best to give the appearance of an iPhone home screen by occasionally telling us the time at the top of the frame in that all-too-familiar Apple font.

In fact, it really feels like those two movies provide a certain shorthand that allows Zola to rely on those gimmicks—er, devices—to fortify the film’s realism. Since the voiceover narration is mostly pulled from the actual tweets, the visual details provided to us in real time give us a better, unfiltered concept of who this cast of characters is as Zola (a mostly deadpan Taylor Paige, who probably delivers narration like “They started fucking, it was gross” better than anyone else could) figures it out. Obviously Zola warns us about Stefani (Riley Keough in a dramatically more Riley Keough role than she’s ever been permitted) in the movie’s opening seconds with her recitation of the now-iconic (1/x) tweet, but it feels like we really learn who Stefani is during the overhead shot of both women squatting in a roadside rest-stop a day after they meet, where we see Zola’s very normal looking pee alongside the nearly opaque urine Stefani produces (weirdly, it’s X (a chilling Coleman Domingo)’s pee habits that also perfectly complement his intimidating pimp-persona—of course he grunts while peeing with the door wide open). 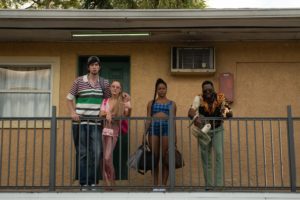 Meanwhile, the constant presence of iPhones (and iPhone sound effects, both diegetic and non-diegetic) stand in for Baker’s actual iPhone, with Zola striving to tell the same type of story that feels like it should be (and I guess literally was) documented on a cell phone—it’s the same sort of non-stop (mostly) non-cinematic action the Dardennes were experimenting with before cell phones were ubiquitous tools for capturing the type of real-life, viral-video situations the brothers made films about (there’s literally even a scene in Zola where we anxiously watch a character sprint across, like, six lanes of fast-moving traffic, a Dardennes calling card). It feels like a bit of meta-commentary when Derek (Nicholas Braun in a dramatically more Cousin Greg role than he’s ever been permitted) shares his dreams of a lucrative career in what he calls “movies”—which are basically just AFV-style Vines that foreshadow his own fate—and you begin to kind of feel hopeful for him to achieve that new cinematic vision.

Then there’s Zola’s own gimmick: the tweet-thread structure. I imagine this won’t go over well for most filmgoers who expect the movie to resolve itself as a movie normally would, rather than when a Twitter user decides the thread’s done (that was actually one of the biggest changes in the screenplay—it glosses over an epilogue which was, in fact, tweeted). But I think that really serves the movie’s general purpose, which is to replicate the sensation of being fed a story 140 characters at a time until the storyteller puts her phone on Do Not Disturb for the night. It really does feel like reading a stranger’s phenomenal story in the form of a viral tweet and clicking on the thread to see how it was resolved, and instead finding a link to a potentially life-saving GoFundMe page instead. Zola pushes the Dardennes’ feels-like-it-could-be-a-movie, morality-tale verisimilitude into a new realm of realism in which it plays like a real-life situation that feels like it could be a movie just as frequently as its stylish post-production choices remind us that that’s exactly what it is. And like all great Twitter threads, there’s no lesson to be learned here, just vibes. FL