Aesthetic Excess and Neglect: On Elder Abuse in George Romero’s “The Amusement Park”

Theme parks are a perfect home for horror: the cacophonous noises of rides churning and children screaming easily overwhelm; the packed faces in the crowd quickly camouflage a monster or two; the dark, crimson blood stands out clearly against a cheerful neon. But even scarier than the surface-level aesthetics is what they represent—the amusement park is also a functioning, exaggerated microcosm of society: a self-sustaining ecosystem built on overpriced snacks and underpaid workers. The latter is essential in George Romero’s recently recovered The Amusement Park, a social horror film about the perils facing the elderly in our society.

It’s not quite a horror movie in the classic sense (no flesh-eating zombies to speak of), but the realness makes it even more terrifying. Bookended by segments of direct-to-camera address by lead actor Lincoln Maazel, the film maintains a verité quality—it’s presented as a straightforward educational film, meant to awaken the audience to the realities of elder abuse. It was commissioned, in fact, to serve this very purpose, by the Lutheran Service Society of Western Pennsylvania.

The commission and explicit activist goal of the film accounts for the realistic tone. As we’re informed in Maazel’s introduction, the filming location is a real theme park donated for use in the film, and the people who appear besides Maazel are unpaid non-actors volunteering their time. The episodic horrors Maazel and other elders face in the park are banal and bureaucratic in nature—an eye exam, a fender-bender, inattentive medical care. But of course, it’s not a straightforward documentary. If it were, perhaps the Lutheran Service Society wouldn’t have been so appalled by it as to shelve it for upwards of 40 years.

The very real plights of the elderly are presented in the style of a horror film, dramatizing the evils of the failed systems that abandon aging members of our society. The first thing we see after the opening address and title card is a sterile, white room populated by two Maazels. They both wear the same white suit, but one is almost unrecognizable in his dishevelment. Where one Maazel has slicked-back, well-kept hair, the other has sweaty curls plastered to his bloody forehead. The suit that looks crisp on one is ruffled, dirty, and stained on the other. When the cheery, fresh Maazel asks the other to talk, asks if he ever goes outside, the decrepit version can only croak out that there’s “nothing, just nothing” outside, through broken wheezes and sobs. Then a last warning, instantly recognizable as the ignored premonition, a hallmark of horror: “You won’t like it.” We know this to be true, since the lines are spoken by what is clearly the future version of this character, but our blindly optimistic lead can’t see that. Already, we encounter the texture of horror—we know something horrible is on the other side of the door, but we’re helpless to stop our hero from opening it anyway.

Handheld camera movements and quick cuts disorient the eye, overlapping dialogue clashes with eerie carnival music. The sensory overload is grating, and puts the viewer in the perspective of a disoriented senior. Even without the occasional shot of the grim reaper stalking through the park, the environment is rightfully frightening.

And open it he does, into a discordant nightmare. The editing, too, lends itself to the feeling of watching a zombie movie. At every turn, the environment is made as overwhelming as possible—handheld camera movements and quick cuts disorient the eye, overlapping dialogue clashes with eerie carnival music. The sensory overload is grating, and puts the viewer in the perspective of a disoriented senior. Even without the occasional shot of the grim reaper stalking through the park, the environment is rightfully frightening.

Still, the real horror here is societal, and Romero doesn’t let the viewer forget it. The park is ruled by money—the man Maazel buys his tickets from is an expert swindler, lowballing seniors with insultingly low offers for their prized possessions; the camera constantly lingers on bright bubble-letter signs that declare “cash only.” This deifying of cash feels close to the experience of attending a real theme park, where every attraction is a thinly veiled money vacuum, and all aspects of your surroundings—the smells, the saccharine pop music, unrelenting advertisements—are curated to assure you spend as much money as possible. The COVID-era reopening ads for amusement parks, with their robotic masked figures in mouse hats ushering the viewer in to forgo health risks to spend a pretty penny on officially licensed merchandise feel as if they could be seamlessly edited into Romero’s nightmarish vision. That rushed reopenings endanger primarily the elderly for the sake of profit feels almost too on the nose. 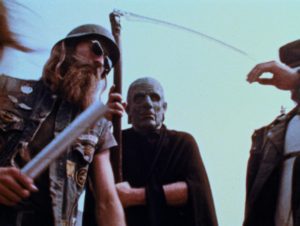 The real cultural horror, then—one that remains unfortunately relevant—is exaggerated and taken to its logical end through the necessarily hyperbolic setting. The neglect occurring in a world of aesthetic excess exposes the lie of late capitalism; not everyone gets a slice of the funnel cake. The Amusement Park uses the theme park setting to couch cultural criticism in a surreal, child-like aesthetic, creating a funhouse mirror that reflects the viewer with all the most unflattering parts stretched to bursting, unavoidable. It’s a short, unrelenting ride through a miniature likeness of the world we live in, except instead of singing a bright song of human connection, the puppets are declining insurance coverage with a comically large “rejected” stamp. Little hope is offered here, and when it is presented, it’s ratcheted away just as quickly.

The Amusement Park is a kind of anomaly—neither educational documentary nor a straightforward horror movie. Though masterful in its construction, it’s perhaps easy to see why the Lutheran Society decided to shelve it as, altogether, the message is implacably grim. After watching, you don’t feel the burning motivation to volunteer like you would after watching a rousing call to action, nor are you kept awake at night with all your lights turned on like after a good horror flick. It exists somewhere between the two, or perhaps as the extreme combination of both—it makes you want to draw your curtains in the middle of the afternoon and fall asleep without an alarm set, hoping to wake up to a different world. FL