In Conversation: TORRES Finds Her Bliss on “Thirstier”

Mackenzie Scott discusses the seismic personal shift that led to the new sound on her latest record—and leaning into her “arena country” moment.
Menu

In Conversation: TORRES Finds Her Bliss on “Thirstier”

Mackenzie Scott discusses the seismic personal shift that led to the new sound on her latest record—and leaning into her “arena country” moment.

On 2020’s Silver Tongue we got the message that Mackenzie Scott was falling in love with someone. During “Last Forest” one particular line stood out: “Now something jogs the memory that I’ve loved you repeatedly / I’ve run to you, it’s come to me, been chasing you for centuries.” This was not a metaphor used by somebody who was trying to simply convey their deep love—as revealed in interviews, she meant it quite literally. When meeting her girlfriend, Mackenzie felt more than déjà vu. She felt a tangible, generational attachment.

The latest TORRES album, Thirstier, by comparison reflects that early sense of romance being kicked off a cliff, fully diving into a headrush of love and the sense of possibility that such a strong bond can provide. Here is a space where love that is familial, platonic, and romantic all align as one, and as such a key question is posed: Why not reach for our fantasies? Often we tell ourselves we’re not worthy of our desires, yet Thirstier would beg to differ. Everything here feels accelerated with TORRES leaning into her “arena country moment,” her vocals soar amongst a backdrop of joy, love, and lust. Each TORRES album has been a stylistic evolution, this may just be her boldest yet.

Ahead of the album’s release, we talked with Scott about the contrasts between Thirstier and past releases and the personal experiences that inspired them.

I’ve been listening to your last single before this cycle, “Too Big for the Glory Hole” and in comparison to “Don’t Go Puttin’ Wishes in My Head” it’s quite the contrast. Would you say this is one of your boldest transitions between albums so far?

It’s hard for me to characterize “my boldest transition between albums” because I think that’s in the eye of the beholder. But I can speak to the shift in my personal world that led to that kind of cosmic seismic shift that you probably felt. I did make a very conscious change to make something that was actively joyful.

You worked with Rob Ellis and Peter Miles on Thirstier, but how much did self-producing Silver Tongue help you for this new record?

The thing about producing a record all on my own was, for better or for worse, I just had to trust my own gut because there was no one else to turn to. It did equip me with more of a confidence that I have what it takes to sit in a room with other producers and be like, “I’m a producer too, we’re producing together, my voice is just as integral here.” But on the other side of that, having another producer in the room is actually really important. I think the shift that you’re noting, from Silver Tongue to Thirstier, a huge part of it was songwriting, but a huge part of it was also having these other collaborators to help me open my worldview about what the record could sound like.

“When I was recording this album, I didn’t really have any other artists in mind that I was trying to emulate. It’s like these are the sounds that came out of my brain, and there’s something that feels really good about that.”

I was wondering if lockdown allowed you to be in a bit more of a creative space, because I know that a few years ago you had a bit of burnout from touring.

I had never really been forced to be a good domestic partner. I had never really learned how to be at home for a long period of time, to exist without any sort of travel or big thing on the horizon. Using my twenties to just travel around the world, I’ve used that as an excuse to not really be so grounded. I’ve just learned how to wake up at 8:30 in the morning and how to do the things that I fought against for so long when I was younger. Creatively, the environment was very well-suited to just thinking for long periods of time about what I was going to make and not having to be so concerned with the press cycle, the touring, the traveling.

You’ve teased in previous interviews that you’ve been tempted to go all in on a stadium country track and you’ve done that with “Don’t Go Puttin’” and “Hug From a Dinosaur”—how does it feel to let loose in that way?

So good! I feel like I find my voice more every record that I make. I’m really trusting my own instincts more than ever, and letting myself sound exactly like myself. When I was recording this album, I didn’t really have any other artists in mind that I was trying to emulate. It’s like these are the sounds that came out of my brain, and there’s something that feels really good about that. 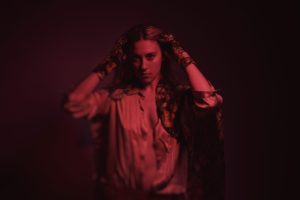 Over the course of Thirstier there’s such a strong feeling of happiness. What have been the main factors leading to you projecting this sense of deep joy?

I think because I felt that transformation for myself. I want to help other people to have that feeling also, because it just changed everything for me. I think I’ve always had a really great capacity for joy. I’ve definitely felt lots of joy over the years, but no real permanent joy. Only in the last couple of years have I had that feeling for the first time, so I just wanted to consciously put that energetically into a record. I want people to be happy, especially after this fucking year—after the last four years—I just want to help people to celebrate again, and to have hope in their futures.

Compared to Silver Tongue, Thirstier leads to a more intense form of love—it sometimes feels like a shameful thing to be so outwardly loving, but you surround that with a more positive angle. How important was it for you to get that positivity across?

In my day to day, I’m a really intense person and so much of that is channelled into my work. I’ve been aware in the past, when I was making records, that that intensity came across in some darker ways—not necessarily all negative, but there were darker emotions. I’ve never intentionally made anything that was uplifting, so it was a little challenge for me as a writer, but also as a person, to channel this intensity into something that when people listen to it, they smile, and they feel overwhelmed in a positive way and not in a heavy way.

“I want people to be happy, especially after this fucking year—after the last four years—I just want to help people to celebrate again, and to have hope in their futures.”

On the title track you speak of getting into a cycle of becoming thirstier—how important is it to allow ourselves to live out our fantasies?

Living out fantasies, that’s the stuff of life. I’m someone who always wants to do the most extreme thing, I want to get the biggest dose of life that I can get. I had this idea that, “What if you get your fantasy, and rather than developing another fantasy that’s totally removed from that previous fantasy, what if that just stayed your fantasy?” I just love the idea that the thing you want can also be the thing that you have—it’s a way of being satisfied but also thirsty in a good way, in a fun way.

I think sometimes when we have our fantasies in front of us there’s a tendency to think we don’t deserve it.

One lyric on the closing track is: “Everyone wants to go to heaven, but no one wants to die to get there.” Do you think our own sense of mortality can hold us back from finding that fulfillment?

Yeah, and not just literal mortality, but any kind of mortality. The fear of failing in any capacity holds people back, I don’t think anyone is impervious to that fear. People want the good stuff, but they don’t want to do the hard work to reach whatever that utopia is. I want to encourage people to do the hard thing so that they can find whatever their bliss is.

On that track you also speak of this sense of oppression keeping people from accomplishing their joy or their greatness. Can you expand upon that?