At the heart of Shawn Levy and the Duffer Brothers’ magnetic Stranger Things series is actor Joe Keery and his high-haired persona Steve Harrington—one who within four seasons has moved from swaggering cock-of-the-walk to a more caring, paternal character, more helpful than harming. At the heart of Levy’s new film Free Guy is actor Keery and his tousled-haired character Keys—one who within two hours moves from menacing henchman and mean-spirited video game programming genius to a more humble, caring, saves-the-day hero type.

That Keery has a knack for playing smart alecks beholden to their boyish humor, good hair, and warm emotional romanticism performed nobly before a backdrop of either technotronic video game wizardry (Free Guy’s mix of Inception, Tron, and The Truman Show) or the spaced-out paranormal (Stranger Things) not only means that the Newburyport, Massachusetts–born actor can hold his own against green screens (he can boldly go far beyond FX, in fact, to forge memorable characters beyond a pretty face). In Free Guy alone, Keery-as-Keys goes up against scenery-chewing hams such as Ryan Reynolds in the film’s everyman-gone-wild title role and Taika Watiti, Keys’ demonstrative, awkwardly rap-inspired boss.

Holding his own and going beyond as an artist is no surprise for his fans, as Keery’s nighttime gig as a one-time guitarist for the Chicago garage-psych ensemble Post Animal—to say nothing of his similarly psychedelic music under the nom de plume Djo—are well-known. “I couldn’t tell you where my music is going next or what I’ll do when I do it,” says Keery. “I try not to focus too much on the process when I’m making music, only because the second that I try to do something, it doesn’t feel the same as just doing it. What comes out comes out, and that’s what we’re working with. It’s probably just a mish-mash of what I’ve been listening to lately.”

“I try not to focus too much on the process when I’m making music, only because the second that I try to do something, it doesn’t feel the same as just doing it. What comes out comes out, and that’s what we’re working with.”

Though he plays an intellectualized video game programmer in Levy’s film, there’s a side to the Keys character that’s comically ready for shoot-em-up action. One outfit in particular that went with the porn ’stache is a police uniform so tight it all but needed to be painted onto the actor’s body before each filming. “I did a fitting for that costume about three months before we filmed the sequence, and in between I thought it might be best if I did a little working out so that it looked OK. However when I got to the set they simply wanted it tighter—so tight it needed the assistance of several PAs to fit me into it.”

Between Free Guy and Stranger Things—whose highly anticipated fourth season is ready to drop—Keery and Levy have worked together for six years and many long days and nights. With that, there’s much of an unspoken bond and artistic sensibility between the two. It might not be DeNiro and Scorsese, but it’s a start. “There’s a lot unspoken between us,” says Keery of his longtime director. “He’s been in my life and career since the start, and he’s witnessed many different sides of me. Actually, it’s pretty great having somebody like that to be a sort of touchstone. I feel like he’s a mentor—I can come to him with any question. It’s a relationship that I don’t take for granted. I sometimes wonder just what the hell he does see in me, but know, too, that I’m just lucky he does. We have a mutual understanding of the way each other works—and it was fun moving from Stranger Things to another character in Free Guy who’s far less confident.” 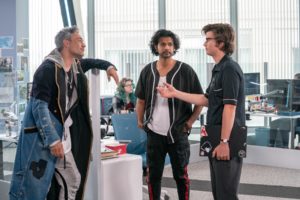 Taika Waititi as Antwan, Utkarsh Ambudkar as Mouser, and Joe Keery as Keys in “Free Guy”

You have to ask because you have to ask, and certainly Keery has become a wonderful deflector of all questions regarding what we’re allowed to know in advance about any upcoming Stranger Things news. “It’s like a second job,” he says with a laugh. “I’m well-trained as a secret keeper.” Ask, however, if the once-cocksure Steve Harrington is continuing along the trajectory of being a more caring, paternal character, as he was in season three, and all the actor can say is that my question is its own hint. “The Duffers have written me a really nice arc, and they’re very conscious of seeing those arcs through to the end of the season.”

“There’s a lot unspoken between us. Shawn Levy’s been in my life and career since the start, and he’s witnessed many different sides of me. It’s pretty great having somebody like that to be a sort of touchstone. I feel like he’s a mentor—I can come to him with any question.”

In 2018, before Keery commenced filming Stranger Things’ next season, he heard about Free Guy and had to audition and jump through hoops as would any other actor. “I’m still new in this industry, no matter how well I know Shawn,” he says frankly. “But I wanted to work with these people, and I’ve grown up loving Ryan Reynolds’ films.”

One challenge for Keery of the Free Guy script—beyond tight uniforms and having to mount Inception-like staircases in his mind—is working out a warmly emotional character while playing to the green screen. “It’s that kind of big movie, a lot of moving pieces. And my part is very expositional in that I’m helping to move the story along while making it feel real and emotional. I had to be very confident about what I was saying.”

The biggest challenge, however, had to be dealing with improv-conscious comic actors such as Reynolds and Watiti and keeping a straight face. “That’s it, really, I’m the straight man and the foil, and I had to hold my own with those two—Watiti in particular. It was amazing just hanging on set watching him work. As a writer and a director, as well as an actor and an improvisationalist, all of those skills are functioning at once with everything he does. The challenge with him, genius that he is, is not cracking up while he’s doing his thing. It was survival of the fittest.” FL