The second in our three-part interview series on the future of Quality Control Music hones in on two artists at the center of QC’s global vision, and features exclusive “Neighborhoods” performances from both artists.
Menu

The second in our three-part interview series on the future of Quality Control Music hones in on two artists at the center of QC’s global vision, and features exclusive “Neighborhoods” performances from both artists.

Our series on the trailblazing music label continues with profiles on Duke Deuce and Metro Marrs, two rappers reared in the studio who demonstrate the QC work ethic—an unrelenting desire to keep getting better in new and interesting ways. You can read part 1 of the series, featuring Kevin “Coach K” Lee and Pierre “P” Thomas, here.

Two of the artists at the center of Quality Control’s new global vision are Duke Deuce and Metro Marrs, regional stars who took surprisingly similar routes to become household names across the country. Both began by grinding away in their respective hometowns of Memphis and Atlanta, burrowing deep into the sounds of the city, gaining an almost encyclopedic feel for the way the culture is shaped and manifested in music. Then, with the QC co-sign, both artists began expanding their sound, not necessarily doing away with what got them stardom in the first place, but building upon it and moving into new directions.

“I feel like I brought crunk back to Memphis,” Duke Deuce explains. “But at the same time, I’m so much more. I want to be acknowledged for that, but still show how many different sides I have to offer.” Calling from LA where he was overseeing the development of his new legal cannabis business―when I caught up with Duke he was trying out a number of different strands in hopes of finding a favorite―he was clearly at a new level as an entrepreneur and artist. “With Duke Nukem, I wanted to step it up a notch and get a little more versatile. It’s crunk, but it’s also not. There are different feels,” he continues. Duke is, in his own words, trying to spoon feed the game everything he can, and the response has been overwhelmingly positive. It’s the sort of next level album that gets you a weed deal and a flight out to California to try out some strands.

“I feel like I brought crunk back to Memphis. But at the same time, I’m so much more. I want to be acknowledged for that, but still show how many different sides I have to offer.” — Duke Deuce

“I need everyone to know, Duke’s got some more shit, he’s not just crunk. I’m a rockstar.” You gotta believe it to be it, and Duke has the sort of self-confidence that’s extremely infectious but hardly braggadocious. Duke is a restless spirit, birthed out of the Memphis scene but itching to showcase a versatility that’s unique to the region. He’s got the QC work ethic, an unrelenting desire to keep getting better in new, interesting ways.

Part of this, certainly, is due to the team that he’s surrounded himself with, but Duke was raised in the studio. His dad, who produced in the Memphis rap scene under the name Duke Nitty, was a go-to beatmaker for Gangsta Blac. Duke, from a very young age, saw the studio as less of an obligation than a place where there are no rules, where all experiments are invited, and all ideas are worthy of exploration. “When my dad was driving me to school we’d listen to rock ’n’ roll. I grew up on some different shit. I always had that in me,” he explains. “My dad and Memphis were the two biggest inspirations on my life growing up. I wouldn’t know what I know if it wasn’t for him. I was constantly around a musical environment. I gotta give my dad the credit.” 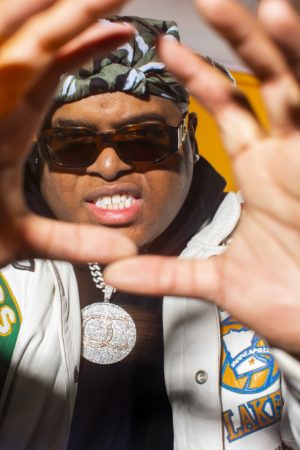 By the time Duke signed his first record deal, he was a studio veteran—which is a large part of why Quality Control had so much interest in him from the outset. Duke Deuce simply belonged. When Duke first broke through on a regional level as a crunk rapper and nothing more, he was thrilled with the success, but quickly began figuring out ways to showcase just how versatile he could be. Duke Nukem is the resolution of this self-discovery, an album that still honors where Duke came from, but does so in a way that goes a long way in asserting Duke as Memphis’ latest star, while still being so much more.

“As a kid—shit, in diapers—I was sitting on the studio floor bopping my head, taking in game. I knew I wanted to be a rapper from those days.” — Metro Marrs

Just 400 miles due east of Duke’s Memphis there’s something in the water in Atlanta, where a whole new generation of upstarts are making their way into a scene dominated by veterans and reliable chart toppers like Young Thug and Future. Metro Marrs, in many ways, falls into this camp—or at the very least, he did when he began his career. That beginning, with hits like “Bye Felicia” and “Oh Yea,” was astronomical, even for Atlanta standards. All of a sudden, there was a new star in the city, a young superstar who loved booming, low-end, melodic raps, and a bevy of young women in his videos. Metro was next up in Atlanta after just one damn song.

“The past two years, I’ve just been in the studio. My team’s been with me, and we’ve just been working. We’ve been developing new sounds and collaborating with different artists. I’m just working on my craft. I make mad songs,” Metro shares. Perhaps it’s worth noting that he says this in response to a question I had about how insane his past two years have been, with his skyrocketing career and constantly growing fanbase. The kid turns 19 next April and he’s tackling questions about success and streaming numbers with the gravitas of Bill Belichick. Both teams played hard. Onto next Sunday.

Making sure the followup is as good as the debut is one of the most overlooked aspects of rap music. Once you get that first hit, you just wanna drop, drop, drop Metro explains to me. But with his team at QC, they figured the best way to move wasn’t Lil Baby’s saturate-the-market philosophy but something more deliberate and exacting. “I learned to have patience. Our turn is gonna come. Mixtapes are on the way, everything is gonna go up. Don’t sleep is all I can say.” For a teenager―hell, for anyone―Metro has his shit together. Patience is hard, patience is probably really heard when you’re on the precipice of superstardom.

“My dad and Memphis were the two biggest inspirations on my life growing up. I wouldn’t know what I know if it wasn’t for him. I was constantly around a musical environment. I gotta give my dad the credit.” — Duke Deuce

But like Duke Deuce, Metro Marrs has had this shit in his blood since he was born. His dad, Young Trimm, was an underground emcee in NYC―Metro learned to rap thanks to his pops. “Every time he was in the studio, I was in the studio. As a kid—shit, in diapers—I was sitting on the studio floor bopping my head, taking in game. I knew I wanted to be a rapper from those days.” Like Duke, Metro credits his pops with getting him into rap. In fact, the teenager still lives at home with his dad, and Metro was the first to mention that while the two aren’t necessarily competitive, it’s hard to cross pops with any bullshit considering he’s an authority on the family career.

“My dad gives me the best advice. He made sure I was connecting with new people, unlocking new doors, from a young age. He’s always been putting me on game.” Metro has been associated with rap since before he could talk, but he’s had to earn every ounce of success. His ability to blend singing and rapping with an almost preternatural ability to conjure up earworm hooks out of thin air has made him a rising star within Quality Control, and one of the most exciting new voices out of Atlanta. Sure, early comps were linking Metro Marrs to all of the city’s heroes, but he’s building something outside of the stuff he grew up listening to. Metro Marrs is a hustler, and his spirit is infused with the need to keep getting better in new and interesting ways. “If I want something, I’m gonna work for it. I’m a studio junkie,” he says, before adding, “When you’re making music, you can’t have any distractions. I don’t look back at the past. You gotta have the vision.” FL