It’s only been two years since the last Tropical Fuck Storm album came out, but, as we all know, “two years” from the perspective of 2021 is basically equivalent two decades pre-, like, 1950, or whenever your grandparents’ first TV set infiltrated their living room. This tactical occupation, broadly, and more so than on TFS’s first two records, is the theme of Deep States—a verbose diatribe on the never-ending cycle that is the irresponsible media that fuels our stupidity, which in turn fuels the irresponsible media, all undergirded by queasy instrumentals continuing on the band’s path to (literally, in this case) invert summer bangers and discover experimental procedures (could “G.A.F.F.” be considered a rap song?) for distancing themselves from their aggressive hard-rock origins.

With the lyric sheet providing plenty of in-depth reading to complement the album’s release today, lead vocalist Gareth Liddiard took the time to provide a little more homework in the form of a deeper look into Deep States. Reading through the backstory of each track—from the imagery of Jesus smh-ing as he pinch-zooms on individual earthlings with his iPhone 12, to the concept (and, yeah, reality) of an entirely loveless Summer of Love Redux, to insurrectionist Ashli Babbit filling the role of the ghost of Maria Orsic that haunts 2019’s Braindrops—it becomes apparent that after only three albums from the band, a TFS lyric bot account is long overdue.

Hear the full LP below, and read on for Liddiard’s self-aware analysis.

1. “The Greatest Story Ever Told”

Jesus comes back like he always promised but he’s here to say “You don’t need me anymore because I’ve had a look on my iPhone and you’re all way more sanctimonious than I ever was—and plus, none of you really ever listened to me anyway so bye bye.” And he goes back to heaven to drink Mesopotamian beer with Maralyn Monroe.

This starts with a sample of Australian politician Bob Katter scolding a journo for caring about all the mad shit that’s going on in the world while rednecks and German tourists keep getting eaten by crocodiles in the Northern Territory. It’s about how everyone gets burned out by being obliged to solve all the world’s problems 200 times a day, yet they’re too scared to say that out loud for fear of being burned at the stake on Twitter’s toilet wall.

This one is kind of about the killing of Ashli Babbit (Roger Rabbit). I kind of felt sorry for her, but to be honest, she was kicking a hornet’s nest when she climbed through that broken window in that door in the Capitol Building. A hornet’s nest that happened to be pointing a gun at her. So it’s a song about morons believing shit posted on dodgy websites by that Jim Watkins guy and his idiot son who are “Q”. Jim runs a pig farm in the Philippines by the way. Massive dickhead.

Yeah, suicide cults are idiots and always get it wrong. But what if that isn’t true? What if you are the idiot, and all these dead cult members are now somewhere really nice laughing at you? This is a song about that. Fi sings this one, so she knows more about it than me. Amy from Amyl and the Sniffers plays some synth, and Sean from the U.S. band Surfbort plays the drums, because our drummer Hammer was stuck interstate at the time and Sean was hanging out in the bush with us.

This is about the pandemic and it’s travel restrictions. You can’t go interstate or overseas but you can fly interstellar. So me and the band go on holiday and drink piss on a tropical beach in Uranus. Or somewhere similar. This will probably be the only song ever written about the pandemic, so enjoy it.

Misanthropy is out of fashion at the moment. It used to be all the rage in the arts world, but now we’re in the Summer of Love Mk 2. Except with porn instead of actual sex, and with very little love involved. Humans are the most wonderful thing that ever existed and everything else can go and get fucked and die. But our little donkey begs to differ and will happily die if only to rid earth of this scourge. Don’t say anything like that in public, though, ’cause you’ll lose your job if you’re lucky enough to still have one.

7. “Reporting of a Failed Campaign”

This is a pretend Bob Dylan epic about people like Jeffery Epstein and Murdoch and the media whores from Fox News. But in a more international setting. How they all end up turning on each other and (hopefully) ruining each other.

Erica sings this, so she’s the expert. But we were all talking about Romeo Agents from the Cold War and their work in East Germany. You can hear Stassi agents radioing each other in the field at the start of the song. Erica took it into outer space, ’cause the working title was “Alien Love Spy.” It was made on an old Casio keyboard and it had that Alien Love Spy vibe.

Back before we were world-renowned rock stars we were actually a bunch of fuck ups. This is a song I wrote with Rui Pereria from our old band The Drones in the late 1990s after my girlfriend died in my car from a heroin overdose. She was a Vietnam War child, and she put me onto a lot of great music and we had a great time as well as a shit time. Rui was a refugee from the war in Mozambique. He’d been moved to Rio de Janeiro where my dad’s side of the family is from, then onto Western Australia. This was before the term “refugee” was widely used in a reasonably nice way. Birds of a feather flock together and we were all a bit more neurotic than everyone else, so we stuck together and had a great time.

But it was all a disaster because you often can’t have that much damage and live through it. Anyway, a “legal ghost” is someone who is bound to die but it’s also the afterglow of someone like that who died and leaves a paper trail of unpaid fines and court summons and visits from the cops. We had a lot of friends like that and yet it took decades to realise that it wasn’t exactly normal.

10. “The Confinement of the Quarks”

The title refers to something they do in particle accelerators like CERN. But it sounded like the title to a cool sci-fi story to us. The music was in the spare parts department for a while, but we dug it up and thought it had that heroically epic yet cheap and nasty sound that the theme from the original Terminator films had. So we threw some bells and whistles on it and stuck it at the end of our movie where the credits would roll. 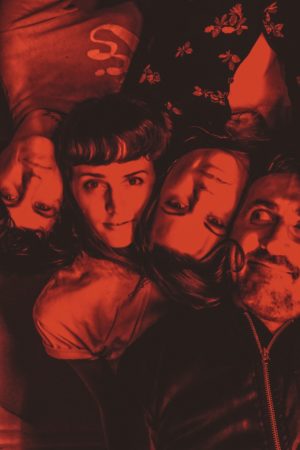