This workman-like all-CD box signals what might be this period’s finest and most uniquely artful one-two punch.
Menu

This workman-like all-CD box signals what might be this period’s finest and most uniquely artful one-two punch. 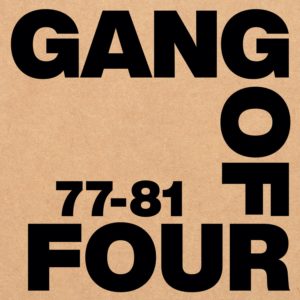 Released earlier this year as a five-LP, one-cassette package—crammed with 1979’s Entertainment!, 1981’s Solid Gold, an album combining their self-titled and Another Day/Another Dollar EPs, the first-ever release of a two-LP live album called Live at American Indian Center 1980, and a C-90 cassette tape featuring 26 unreleased demos—77-81 is a luxe and pricey package that seems quite the opposite of what Gang of Four was about. Built in the immediacy of anarchistic British punk and the socialist student politics of working class Leeds, Andy Gill, Jon King, Hugo Burnham, and Dave Allen were beyond curios. A more efficient and workman-like all-CD box designed to look plebeian, wrapped in brown paper, and finally released in August after many delays signals what might be this period’s finest and most uniquely artful one-two punch.

Along with crusty New York no wave acts of the same period such as The Contortions and Mars, whose halting rhythms were heavy and angular and whose ravaged guitars slashed into each melody, Gang of Four created an aggressive noise-scape of their own: an icy, soldiering, and sinewy punk-funk not so much on the good foot, but with its own brand of swing (drummer Burnham, bassist Allen) and teeming with caustically insightful rhetoric and curt, even brusque originality. LCD Soundsystem, Red Hot Chili Peppers, Bloc Party—there is no them without Go4.

The live album from San Francisco and the demos collections are the best place to start, as, save for a peculiar cleanliness on its bottom end (smoothed, but not entirely unfractured and mussed-up, is Solid Gold), it was the crisp, accuracy of Gang of Four’s studio sound (on Entertainment!) that made them potent, poppy, and—dare I say—entertaining. Like the work of an ace sniper rather than a machine gun’s scatter, the clear shot of the syncopated “Damaged Goods,” the stuttering “Not Great Men,” the swerving “I Found That Essence Rare,” and all the hurt personal, social, and sexual politics spit forth by Jon King are powerful because they’re served cold and with a bite—an all-vodka martini sans the olive, and with a punch in the face.

Having witnessed them live at this time, the captured 1980 San Francisco gig CD—like the salty demos collection—offers versions of their frank familiars such as “At Home He’s a Tourist” somehow blunter, briefer, and at a breakneck speed to rival hardcore’s finest (no wonder why, beyond just its politics, Go4 is a prime inspiration to Fugazi). Again going back to the no wave comparison, this was skinny frenetic poli-punk without gristle or fat. Just noise and hard intent.