In Conversation: Alice Longyu Gao Won’t Feed Into Your Fantasy

The producer, songwriter, and DJ discusses her recent single “Kanpai” and her concerns about the role of Asian music in Western culture.
Menu

The producer, songwriter, and DJ discusses her recent single “Kanpai” and her concerns about the role of Asian music in Western culture.

Chinese-born, NY/LA-based multidisciplinary artist Alice Longyu Gao is a charming conversationalist whose engaging thoughts move in quick succession from talk of loneliness and mental health to the acceptance of Asian culture and music in the West. Emotive, passionate, and chatty, speaking with Gao feels like being face-to-face with a friend as her poignant introspections blend away into her vibrant musicality.

The producer, songwriter, and DJ recently dropped her single “Kanpai,” which brings swirling synths and pulsing beats together with a love for her Asian heritage. Written three years ago alongside Gao’s close friend, American-Japanese artist Madison Emiko Love, yet only gracing the ears of listeners now, the track is an unapologetic anthem made to bring everyone—include herself—out of any darkness that lurks in our lives with its celebratory vibes.

In our talk, the impassioned talent—loved by the likes of Lady Gaga, The Weeknd, and Selena Gomez—reveals why she chose to release the track now instead of three years ago, delves into the issues of how Western audiences perceive Asian music and culture, and meditates on the question of how our society can be made better for everyone.

“Kanpai” was written three years ago, was there a particular moment that inspired you to put out the song now?

I’m a really emotional person and I don’t get support from my family for the music that I make. So growing up I felt so much pain, and the nature of  “Kanpai,” which is such a joyful word, offsets all that sadness. When I wrote it three years ago, I was worried that my audience, who are mainly English speakers, wouldn’t be able to understand it. But like my dad says, success comes from timing. And it feels better to put out a song like “Kanpai” now than it did three years ago, because though women and minorities are not treated fairly and we still have a long way to go, things are getting better. So I thought it was about time to put out a song that showcased my background. Back then, I wanted to write a turn-up song, and after the year we’ve all had I feel this song can cheer everyone, including myself, up.

“Many artists tend to entertain the fantasy attached to Asian culture. But for me, if I have Asian language in my music, it’s because it comes naturally to me. It’s not because it sells well, it’s based in my reality that has often been painful.”

You mentioned being worried about how people might perceive music that’s not sung in English. As an Asian artist who’s grown up in the West, did you ever try to lean away from your heritage in your music because you were worried about acceptance?

Yes, I was definitely worried— that’s why I waited three years to put out “Kanpai.” But I want to emphasize one important thing: I often get emails about how songs with “international flair” will do well commercially. I’d like to say that my life and experiences don’t exist to feed into your fantasy—whether it’s Harajuku, Chinese costumes, Kimonos, or yoga. Many artists tend to entertain the fantasy attached to Asian culture. But for me, if I have Asian language in my music, it’s because it comes naturally to me. It’s not because it sells well, it’s based in my reality that, like I mentioned, has often been painful. I don’t have a backup plan, and that motivates me to make sure my art is authentic and something I’m proud of. Because if I’m successful, my culture can translate to every single person who hears it.

I feel like a lot of people have caught up to the fact that language isn’t a barrier in music. But what else needs to change for Asian music to be accepted as a genre beyond being just a fascination?

At the end of the day, music is a business, and for people like me to be successful, those with money and power need to support us unconditionally before we’re big. For instance, saying “Oh! BLACKPINK is amazing!” is great, but it’s too late if you support an act only after they’re already big. Don’t add artists of color to a playlist just because our culture is trendy—make us and our art a priority. 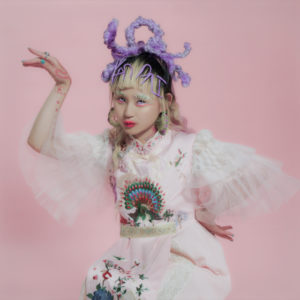 What’s the biggest challenge of trying to strike a balance between representing your heritage in your music while also bringing elements of your Western upbringing into it?

I don’t overthink too much when I’m making music, because if you start thinking about how people may understand this part of my art, or whether they may accept that part of it, then you’re never going to be able to do anything at all.

“Music is my medium to process and express my ideas of how society could be better. I want my music to be the platform for whatever message is most beneficial to each person who listens to it.”

If listeners could take away one message from your music, what would you want it to be?

When I was in college, my last paper was based on the concept from an Indian Buddhism script about living life in a way that you aspire to benefit other people. For me, my music is the way to benefit other people’s lives—it’s my medium to process and express my ideas of how society could be better. I want my music to be the platform for whatever message is most beneficial to each person who listens to it.

What can you tell us about your next single, “100 Boyfriends?”

It’s my pansexual anthem, a track that’s a bit of flex in a way that’s exactly the opposite of my life embodying a bit of what I hope my life becomes.

What’s been the most memorable moment of your career so far?

Opening for Cashmere Cat was awesome. I adore his music and he literally gave me his number saying, “Text me, I have something to ask you!” which was unreal. Second was when Selena Gomez drove all the way to Downtown LA just to watch my opening set for another artist. She was dancing and I got to talk to her after my set. Or when “Rich Bitch Juice” came out and The Weeknd posted the song on his Insta story. And, finally, when last year for International Women’s Day, Lady Gaga put me at number three of her Women of Choice playlist on Apple Music.

What’s one question no one asks you in an interview you wish you were asked?

“How can we make our society better?” The answer is firstly making museums free for all, because art nurtures your mind. When I was young and my parents were busy with their work, going to museums helped me feel less lonely and inspired me. But many museums charge up to $25 for visits, and given how educational these visits can be it should be free. Secondly, health insurance should be available, especially to LGBTQ+ workers in nightlife and hospitality—as well as the legalization of sex work, which should be part of the health insurance system. FL