Blvck Hippie, “If You Feel Alone at Parties”

Everything Josh Shaw does is immediate, off, and odd—like a welcome meeting of Violent Femmes, Kid Cudi, The Cure, and Tom Verlaine.
Menu

Blvck Hippie, “If You Feel Alone at Parties”

Everything Josh Shaw does is immediate, off, and odd—like a welcome meeting of Violent Femmes, Kid Cudi, The Cure, and Tom Verlaine. 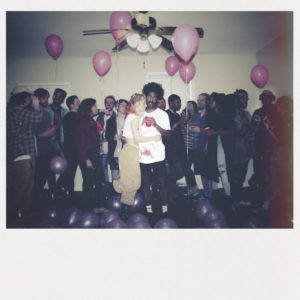 From the first spin of Memphis’ self-proclaimed “Sad Boy” Josh Shaw and his fresh Blvck Hippie aesthetic, you get this creepy, ditzy, funny vibe of someone both young and old at the same time unsurely testing the waters of his talents, unembarrassed by any and every outcome. It’s as if Shaw is toying with ancient pop tropes that he just tripped over—such as art rock, prog, and surf jangle—and playing along with these newly discovered treasures. With that, everything he and his Blvck Hippie does is immediate, off, and odd—like a welcome meeting of Violent Femmes, Kid Cudi, The Cure, and solo Tom Verlaine playing your prom because their Bonnaroo-bound tour bus drove off the road in Memphis.

From the bent guitar notes, menthol cigarettes, and cold feet of “Art School” to the shy and tamped-down surf pop of the title track, you can hear vocalist Shaw linger on warbly notes just a little too long. Then again, he could also be running wildly and atonally at the mouth from an abundance of cross-cutting ideas, cramming more words and catchy melodic phrases into a space than can be held comfortably. (Shaw likes that willowy guitar sound a lot, as he intros “Answering Machine” with that elephant-farting tone). Screamo-prog-power-pop is here in the guise of “Bunkbed” and its tale of “two dumb kids too poor to pay rent,” as is the angry, waltzing chamber pop (complete with a string-laden outro) of “Technicolor,” as is a striking ear and eye for real poetry (“In tears you watched me drink until my demons appear” is but one fine example of Shaw’s showy texts).

The quick-snapping, rickety drums and hasty, nasally askew vocals that infect most of Blvck Hippie change pace and slow down handsomely on the Bill Frisell–like “Smoke Break Interlude,” the falling down, “bottled-inside” soul pop of “Straight to TV Movies” (with an impressive guitar solo), and the dreamy “NYE” with its romantic call for reconciliation. When Shaw asks his special someone to stay and forgive his perceived mistake on that track, he puts his whole being into his braying plea: “I yaaam not the same,” bellows Shaw in an emo-not-emo manner so nakedly earnest that he just about breaks your heart in 17 places every time you listen to it.

“Every time you listen to it”—that is the point. For If You Feel Alone at Parties isn’t only a must-listen, but a must-repeat-listen, many times in a row; a lo-fi, rhythm-and-blues-and-indie, heartbreaking mini-epic about growing up and out and over while blossoming weirdly anew and expressing genuine poetic thought every time you hear it.