The Pop Group Are Still Bending Time on “Y in Dub”

Mark Stewart sets the scene for the recently released dub reimagining of the record helmed by its original producer, Dennis Bovell.
Menu

Mark Stewart sets the scene for the recently released dub reimagining of the record helmed by its original producer, Dennis Bovell.

Mark Stewart busted my chops within the first minute of our phone call. “How old are you, mate?” he asks sarcastically. “I just want to get a frame of reference because you’re talking fast like a 12-year-old right now.” Thanks to a mix of nerves, caffeine, and the fact that I was chatting with the British post-punk legend at 8 a.m. my time, our interview started with a bit of turbulence, but we straightened out.

Stewart is most commonly recognized as the frenzied vocalist of The Pop Group, a band whose name sounds like more of a piss-take with each passing year. A few weeks ago they released Y in Dub, a new reimagining of the band’s 1979 debut album from original producer (and dub legend) Dennis Bovell. Each track is given the studio-as-instrument treatment as they’re drenched in effects and mutated into strange new shapes. As a fan who’s listened to Y more times than I can count (and named my record label after one of its songs), I’m happy to say it’s like hearing the album again for the first time.

Formed in Bristol in 1977 when their members were in secondary school, The Pop Group combined no-wave discordance with elements of the radical Black music genres of dub and free jazz. The band’s second single, “We Are All Prostitutes,” is a potent example of this sound and their confrontational subject matter with its harrowing critique of consumerism. “The emergence of punk totally energized us, and we thought we could do anything,” says Stewart. “Seeing the Sex Pistols rip up a tiny stage made us feel a thousand feet tall. I’ve got this saying about ‘the arrogance of power,’ but we had the power of arrogance.”

“The emergence of punk totally energized us, and we thought we could do anything. Seeing the Sex Pistols rip up a tiny stage made us feel a thousand feet tall. I’ve got this saying about ‘the arrogance of power,’ but we had the power of arrogance.”

Any teenage musician would be confident after signing to tastemaking label Rough Trade and appearing on the cover of multiple British magazines in the same week. With this head of steam, The Pop Group were offered the opportunity to choose the producer for their debut album. “They flew John Cale over for a meeting. I had to knock off school at lunchtime to go meet him,” Stewart recalls with a laugh, as my mind reels to think about what Y could have sounded like in Cale’s hands. “We knew what we wanted to make and thought we could do it ourselves, like classic spotty little 15-year-olds. But we had to pick someone, so the first name I said was King Tubby. Then he got shot.”

Stewart has been a fan of dub, reggae, funk, and any music with heavy bass since the early ’70s, when anti-racist skinheads popped up in Bristol as a progression of mod culture from the decade before. “As a reaction to that, Jamaican musicians started making records with names like ‘Skinhead Moonstomp,’” he explains. “They would come over to these grotty mining towns in England and play for a club full of working class lads with shaved heads and Dr. Martens doing the moonstomp.” 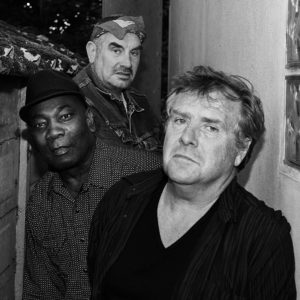 With his towering height, Stewart was able to get into nightclubs as early as age 13. During daylight hours, he walked back and forth from school to save his bus fare for buying records. In his liner notes for the compilation Sherwood at the Controls, fellow dub producer and future collaborator Adrian Sherwood recalled their first encounter. “I met Mark in the Revolver record shop in Bristol around 1975 or 76,” he wrote. “I was 17 or 18 and he would have been 14 or 15—a giant spotty schoolboy music fanatic. He would wait there for what he and his mates called the ‘van from Zion,’ which was what they called my reggae delivery vehicle carrying the new tunes every week.”

“We had already found out about Sun Ra and free jazz, and had been to Derek Bailey concerts where he put crocodile clips on his guitar. I think taking risks and experimenting is where magic happens.”

One of the songs Stewart became obsessed with was “Feel Like Making Dub,” the B-side of “Feel Like Making Love” by Elizabeth Archer & the Equators. “It had all of these backwards, slowed-down sounds similar to what Joe Meek did,” he raves. “It almost sounded like it was chopped and screwed. I was totally astounded, and wanted to go further into that jungle.” After squinting at the credits of the 7-inch, Stewart learned that its dub version had been recorded by Dennis Bovell, a name he recognized from the band Mtumbi, then famous for their cover of Bob Dylan’s “Man in Me.” Armed with that knowledge, The Pop Group finally settled on their chosen producer.

“I told the label that we wanted to work with Dennis, so we tracked him down and got on like a house on fire,” says Stewart. “Thank god he was even more childlike, naive, and playful than we were. We were put in this barn on a weird farm and left to our own devices for three weeks, so we just created havoc!” Alongside his memories of guitarist Gareth Sager “climbing across the mixing desk like a monkey,” Stewart says the band was excited to integrate techniques from various corners of avant-garde music. “We had already found out about Sun Ra and free jazz, and had been to Derek Bailey concerts where he put crocodile clips on his guitar. I think taking risks and experimenting is where magic happens.”

In 2019, Mute Records released a 40th anniversary edition of The Pop Group’s debut. To celebrate this, Bovell performed a pair of live dub reconstructions of the band’s single “She Is Beyond Good and Evil” and its B-side “3’38.” This inspired them to commission his full-album remix, handing over Y’s master tapes with the caveat that Bovell could only use technology and techniques from the era in which it was originally recorded. “We would have done it in the ’70s, but there just wasn’t enough time,” says Stewart. “Y in Dub is like taking Dennis in a Tardis back to that studio when we left and saying ‘Dub it!’”

Beyond the revolutionary sound of The Pop Group, Stewart’s lyrics are equally striking. On Y’s immortal opener “Thief of Fire,” he wonders who you can trust “when you’re stealing from a nation of killers.” The fractured grooves of “We Are Time” include calls to arms to “break the speed of change” and “tame eternity” in a world built on “black letter lies.” Comparing Bovell’s work on Y in Dub to poet Brion Gysin’s cut ups, he says listening to his “younger self shouting across the years” allowed him to hear the album with fresh ears as well.

“When I was going through these songs and hearing lyrics that I wrote in my notebook when I was 12, suddenly some words that had been disembodied by Dennis jumped out with a slightly separate meaning,” says Stewart. “Because I supposedly deal with heavy topics, which I don’t think are heavy, people treat me like I’m a Greek oracle. I didn’t know what I meant back then, and I know even less now! I’ve always just thought it was cool to throw mad things together and see what happens.” FL