Bored Ape Yacht Club #9797—a.k.a. Jimbo—on becoming the first NFT to make and release its own music video with the electro-shock-trap-hop of “Delist your ape (2DaMoon).”
Menu

Bored Ape Yacht Club #9797—a.k.a. Jimbo—on becoming the first NFT to make and release its own music video with the electro-shock-trap-hop of “Delist your ape (2DaMoon).”

Waltzing into the non-fungible token universe, as prevalent as it is in a world where cryptocurrency increasingly reigns, is no simple task. Or isn’t it? This was just one of the most pressing questions I had for Bored Ape Yacht Club #9797—a.k.a. Jimbo—as theirs became, this week, the first NFT to make and release its own music video with the electro-shock-trap-hop of “Delist your ape (2DaMoon)” featuring Reo Cragun & Clear Eyes.

For the unfamiliar, the Bored Ape Yacht Club NFT collection is ripe with 10,000-plus unique digital collectibles on the Ethereum blockchain, with Bored Ape generated from over 170 possible traits, including—so they say—expression, headwear, clothing, and color, along with a fanbase now dressing up like Jimbos. Think of Damon Albarn’s Gorillaz in hyperspace and hyper-speed multiplied by 10,000.

However, rather than thinking of this as a blockchain vapor filming a video with music, Jimbo says this is so much more. And so much less.

Can you explain your vision for the NFT format?

NFTs are amazing for what they’re allowing for small artists. This is the first time in history where all an artist needs is a small fan base to make a living off of their creative efforts, with extremely low barriers to entry. I’d argue that the biggest barrier in NFTs is simply educating yourself, and all that education is available for free on the internet. Over 10 years ago, Kevin Kelly became known for his concept of “1,000 true fans,” basically stating that all a creative needed to make a living from their work was 1,000 people who really enjoyed it. I believe that with NFTs we’ve reduced that number to even fewer. Even better, since this is all digital, the people artists need to market to are all actively searching for new art to acquire, and all the tools needed to market your work are free.

“​​In the past, creative tastemakers determined what became popular, now we’ve decentralized the process of deciding what’s ‘cool.’ It’s through decentralizing this process that I believe we’ll start to see truly innovative artistic expression.”

I think NFTs represent a pivot in the way we view the creator economy. For the first time, artists don’t have to forsake their own creative vision to fit into what a record label or art auction house thinks is marketable. In the past, creative tastemakers determined what became popular, now we’ve decentralized the process of deciding what’s “cool.” It’s through decentralizing this process that I believe we’ll start to see truly innovative artistic expression. You don’t need to do what’s popular to succeed as an artist anymore. Just create what’s authentic to you, and chances are there’s a community or subculture somewhere on the internet that’s going to love and appreciate it.

This is a question that arises as the FLOOD editorial brain trust and I are protective of the environment and know that NFTs cause harm to Mother Earth: What sort of carbon footprint does BAYC leave, and how can you leave less of it?

The Ethereum blockchain consumes as much energy as it’s going to consume, regardless of the amount of NFTs minted on it. So the argument shouldn’t be “NFTs are bad for the environment,” it should be “Ethereum/proof of work consensus algorithms are bad for the environment.” At which point, we should compare it to other complex systems and see how much energy they consume. When people talk about the energy being consumed by NFTs, that energy is being used to power a system that offers you all the same functionality and resources that a bank or any financial institution can, and now it even offers solutions for creatives. The value being created here is massive. 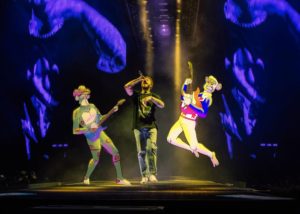 “Blockchain, and therefore NFTs, are putting huge financial incentives behind being more energy-efficient—when people complain about the environmental effects of NFTs, they aren’t seeing the bigger picture…we’re setting the foundation for a world where being energy-efficient isn’t just ethical, it’s profitable.”

Additionally, because energy is a raw material needed to run a blockchain, and blockchains have become hugely profitable to mine, I believe they also represent the largest financial incentive to find more sustainable energy solutions than the world has ever had. As much as we like to believe that people are good at heart, the best way to get people to go green is to make it extremely profitable to do so. Being energy-efficient is extremely important for miners—the more efficiently they consume energy, the more money they make. Blockchain, and therefore NFTs, are putting huge financial incentives behind being more energy-efficient—when people complain about the environmental effects of NFTs, they aren’t seeing the bigger picture. The bigger picture being that we’re setting the foundation for a world where being energy-efficient isn’t just ethical, it’s profitable.

So, an NFT is releasing a music video that I can hold onto and see without paying for it—why do it? Could this in any way devalue the NFT? How does this create monetary value?

Don’t think of it as an NFT releasing a music video. Think of it as an artist releasing a music video, and there’s an NFT that reflects the exact value of the brand that artist is creating. Imagine if, as an artist, I could build up a brand around my music and watch the value of that brand go up in real time, and when I wanted to retire, I could list my brand and sell it online. Everything that BAYC9797 releases is his—if someone were to buy BAYC9797, that means that they were the ones who released this music video. NFTs are all about provenance, proving ownership. When I transfer ownership of an NFT to someone, they get that brand, everything it entails. The owner of the NFT owns its intellectual property—this isn’t true for all collections, but is true for BAYC specifically. 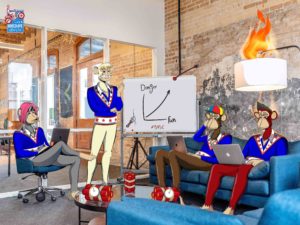 This is brand-building 2.0, building brands that can be easily transferred from party to party. Let’s say a record label wanted to start pushing out virtual artists. Does it make more sense to create an original and unique artist and spend money trying to create an audience around it, or to buy an NFT from an existing community with an already-captive audience that’s going to support anything done by people in that community because a rising tide raises all ships? Taking that a step further, if you were that label, would you buy just any NFT from that collection, or an NFT that has already built up a following around music that it’s been releasing? I’m not saying that’s my goal, more so bringing it up as a way to explain how value is being created here. I’m never selling. The value is in the brand. BAYC is already a multi-billion-dollar brand, I’m just trying to build another multi-billion-dollar brand on top of that.

I love Cool Cats, for sure, and some other PFPs like World of Women, Doge Pound, Deez Nuts, and too many others to name. Recently I’ve been really focusing on NFTs with utility and one of my favorite utilities is gaming. I’m really into this collection BrokeBoyz—it’s a metaverse brawl game. BrokeBoyz really drew me in with the game theory they’ve worked into their collection and the amount of value they bring to the community. They even AirDropped a bunch of metaverse clothing and accessories to all their holders. Charity NFTs are another utility I really like, because it gives transparency to how our donations are being distributed. I bought a few Charitypops NFTs which raised $150,000 for charities last month, and over $25,000 for the Lonely Whale [Foundation] with Adrian Grenier, a.k.a. Vinny from Entourage. These aren’t the only utilities out there, but just some that I’ve been dabbling with recently.

What don’t people get about the NFT format IYHO that you find most frustrating?

What I think people don’t understand—and Right-Click Savers, I’m talking to you—is that the true innovation behind NFTs has nothing to do with art. Art is just the first thing to really take off with this new medium. The innovation behind NFTs is being able to prove ownership of a file. It drives me crazy how people don’t understand how huge this is. Up until NFTs, there was no way to prove who owned a specific file. No way to track ownership. That’s why platforms like Napster were able to exist—you couldn’t figure out who was the original owner of a file, so you couldn’t really figure out who pirated it to begin with. Now that we can prove ownership online, we can take a lot of processes that are old, slow, and archaic, and make them digital. NFTs are just the beginning of what this technology will create. FL