Another Green World: Our Favorite Non-Musical Forays from Musicians

The new semi-animated Toro Y Moi concert film got us thinking: when it comes to making things that aren’t music, which musicians have done it best?
Menu

The new semi-animated Toro Y Moi concert film got us thinking: when it comes to making things that aren’t music, which musicians have done it best?

You often hear the phrase “musician’s musician” when someone is digging to up the ante of their praise a little bit—like there’s no higher compliment than saying that someone makes something that their colleagues enjoy. And that’s probably true to a degree—but what about an artist who makes things that artists in other fields enjoy? Is there such a thing as a “filmmaker’s musician”? Or a “chef’s musician”?

If there is, Chaz Bundick (a.k.a. Toro Y Moi) is certainly vying for the title—of “filmmaker’s musician,” that is (we’re still waiting for word on his culinary skills). His latest project, a concert film made with director Harry Israelson titled Live from Trona, incorporates elements of animation and VHS footage, and seems to be just as much a cinematic project as it is a musical one.

In anticipation of being able to go down that potentially synesthetic experience with Chaz next month, we decided to break down some of our favorite examples of musicians experimenting with other forms of media. Bon appetit.

Stop me if you’ve heard this one before, but once upon a time, Frank Zappa made something weird. It was 1977, and ol’ Frank decided that his concert movie needed an extra touch—so he directed the animator Bruce Bickford to match the heavy title track of Baby Snakes with an even heavier stop-motion scene. The result is one of the all-time great YouTube videos to show your really stoned friend. — Nate Rogers 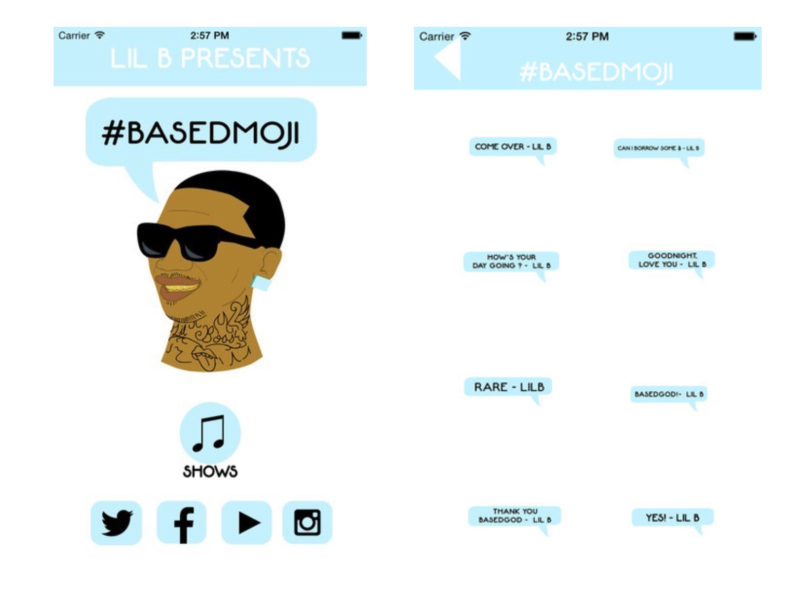 It’s been a blurry two years since the release of Basedmoji, which was incubated under the nurturing hand of our Modern Linguist, Lil B. Issued gratis—granted that you “have fun with your friends and family and celebrate the life of Lil B”—Basedmoji is apt in its description and features a gamut of Lil B talking heads: some bid you goodnight, some sport a Midas-like throne, some cradle a terrestrial globe, and others, of course, help you ask some penetrating questions when you feel like you don’t know how: “Where’s the Bitches?” The keyboard is still available for download, by the way. — Annie Vainshtein

Released the same year as the band’s seminal Alive!, the KISS pinball machine is a perfect encapsulation of mid-’70s hesher culture, so much so that nouveau flipper makers Stern introduced a bright update to the machine just last year. It’s easily the best plywood box with the KISS logo on it, too; sorry, KISS Kasket. — Marty Sartini Garner

No surprise given that he was basically an overgrown child, Michael Jackson loved video games. At one point, he was even signed on to do the music for Sonic 3 before that fell apart for some strange reason. Thankfully, however, nothing fell through during the making of the Moonwalker—an actually legitimately fun game that may or may not have solely been about MJ saving kids with his dance moves… What can you say? It was the ’80s. That wasn’t weird yet. — NR

In March, British house producer and wildly experimental artist Matthew Herbert (a.k.a. Herbert, Doctor Rockit, Radio Boy, and Wishmountain) exhibited his latest project, the Science Gallery London–commissioned piece “Edible Sounds”—”vinyl” pressed from a tortilla, cheese, slabs of ham. Even aubergines were rumored to have taken part. Those familiar with the precocious Herbert may remember his explosive work in ’90s house, work made from everyday kitchen objects (Around the House), human hair manipulations (Bodily Functions), and cutting, conceptual tirades against corporate conglomerate McNugget-mongering franchises. Undeniably, edible vinyl seems like a natural next step for the man who recorded a concept album beneath London’s sewers, sampled 3500 people biting an apple at the same time, and—reminding us that the personal is always political—drove a tank (a tank) over a musical recreation of Nigella Lawson’s cooked dinner for George Bush and Tony Blair. — AV

Though he was occasionally perceived as a philistine, Prince was never afraid of the web; he only wanted to control how his image was formed in all those 1s and 0s. So in 1994, he did what any enterprising genius would do and created his own take on Myst, which came complete with playable gold records, scantily clad women, and a video of Eric Clapton talking about Prince. Paisley Park is in UR <3, but for a brief period of time, it was also in your CD-ROM drive. — MSG

In 2011, Björk created the multimedia project Biophilia, which was revealed in tandem with her album of the same name. The app/project/revolution, available to purchase for $12.99 on iTunes, is currently on display at the Museum of Modern Art. Biophilia houses ten separate apps (intended as explorations of each of her album’s tracks) and is a virtual manifestation pronouncing—interactively—the many ways art and the cosmos obscure each other. In a very Björkian fashion, the app is no fool’s play—several European schools have incorporated Biophilia into their curricula.  If you’d like to experience phenomena of the universe thumping to the beat of Björk’s voice or gaze at illustrations of thunderbolts, crystals, and the solstice, perhaps this is an urgent blessing from the harmonious system. — AV

OK, this one wasn’t exactly made by a musician—loads of massively talented animators under the direction of George Dunning did most of the creative legwork—but it really feels like The Beatles themselves deserve credit for Yellow Submarine, right? Out of the five official Beatles films, this is the one that most seems to capture the essence of the group—which is weird considering that they didn’t even voice their own characters. Just goes to show: sometimes the best decision you can make is to hire other people to make decisions for you. — NR

“Milkshake” became such a success that Kelis decided to stick with the edible theme and run with it as far as humanly possible. Her FOOD truck that popped up for 2014’s SXSW Festival served jerk ribs, sliders, and coleslaw. Kelis’s other palate-cleansers have included her album FOOD (half of the album’s song titles reference soulful meal and beverage favorites), her cooking show Saucy and Sweet, and a cookbook filled with her favorite recipes. — Sarabeth Oppliger

Brian Eno’s “A Day of Light” video project harks back to the emotive crowdsourcing of Life in a Day, the marvel of a film that somehow took 4,500 hours of raw footage to produce a succinct encapsulation of what it was like, everywhere around the world, to be alive on July 24, 2010. In conjunction with his 2012 album Lux, Eno invited fans to submit photos surrounding the many stages of light: sunrise, day, sunset, and night. The result? Over 6,000 submissions pared down to a celestial four minutes. — AV