Nothing here wants for hooks or for energy, but the songs on The New Pornographers’ seventh album all seem flat somehow.
Menu

Nothing here wants for hooks or for energy, but the songs on The New Pornographers’ seventh album all seem flat somehow. 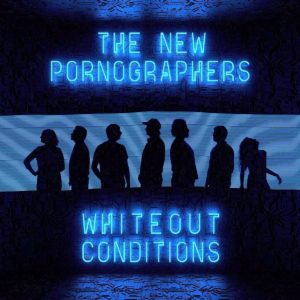 The magic of power pop is how it makes sturdy songcraft sound exhilarating. The New Pornographers know this, and always have. All of their albums are basically variations on a theme, and it works for them, time and time again, because they’ve got such a knack for mining the songwriter’s handbook for visceral thrills—folding multiple hooks into every song, writing not just melodies but words that are catchy and propulsive, layering harmonies and guitar riffs on top of each other like pocket symphonies of garage-born mayhem.

The handiwork is essential, but it’s not meant to be the focus—kind of like how the sign of great acting is that you don’t even think about the fact that it’s acting. You’re not really supposed to think about the studied craftsmanship of a New Pornographers record, either; it’s the noise that’s the thing, and none of their albums have ever produced quite the same deafening din as Whiteout Conditions.

But could it be that they’ve actually pushed things too far into the red? If all you’re looking for is a jolt of melodic chaos—riffs and riddles careening by at a breakneck pace—there’s certainly much to love here. Again, it’s a variation on a theme. Dan Bejar (a.k.a. Destroyer) isn’t here this time—just a scheduling faux pas, we’re told—so the proceedings are heavier on Carl Newman and Neko Case than ever before. They’re also heavier on electronics—the stainless steel drum loop that counts off “Play Money,” the chilly synths that underscore the title song, and on and on.

Nothing here wants for hooks or for energy, but the actual sound of the record can be ugly; there are a lot of layers, but they all seem flat somehow, and as songs fly by they blend into background hum. Much of the crispness and distinction that marked the arrangements of 2005’s Twin Cinema, for instance, is jettisoned in favor of one big ruckus, which at times sounds garish.

Maybe that’s not a hurdle for you, though; maybe you just want those sticky melodies rolling around in your head, those lyrics to tease out and puzzle over, that high-octane energy, those waves of voices. Whiteout Conditions is all of that, everything The New Pornographers do well, pushed to an extreme—one that, in hindsight, makes their more measured and dynamic material easier to appreciate.