In an age of army-sized writing teams crushing any sense of person on most major label releases, Lorde exists as a disarmingly legitimate personality.
Menu

In an age of army-sized writing teams crushing any sense of person on most major label releases, Lorde exists as a disarmingly legitimate personality. 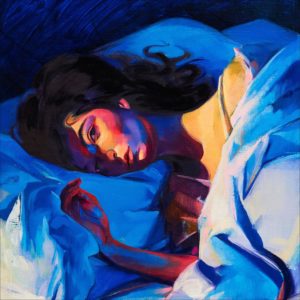 Just as there’s no basement in the Alamo, there’s no back of the Louvre. It’s an absurdly sprawling museum—impossible to cover in more than two months’ time—but every inch of it is meticulously studied, and you couldn’t tuck something away if you tried. But when Lorde refers to just such a place on Melodrama (“We’re the greatest / They’ll hang us in the Louvre / Down the back, but who cares—still the Louvre”), you don’t question it. Honestly, it’s almost enough to get you on a flight to De Gaulle to find the damn place yourself. See if there’s a wing that everyone else missed but she saw.

It’s this natural persuasiveness—being someone who can convincingly reference Top Gun despite being born a decade after the movie came out—that’s made Ella Yelich-O’Connor pop’s greatest commodity in 2017. In an age of army-sized writing teams crushing any sense of person on most major label releases, Lorde exists as a disarmingly legitimate personality—goofy-ass dancing and all. Pre-fab artists are swell enough for serving as vehicles for Super Bowl–sized hits, but they frequently don’t feel like they have much importance on an individual level (despite twenty-four hour live streams aimed to convince you otherwise). They don’t feel like any kind of statement on a culture.

Despite the fact that Melodrama indeed does land as something larger than itself, it does so with an emotional palette that constantly betrays Lorde’s ironically royal status in the wake of Pure Heroine. Only in its avoidance of the topic of our generation-wide social media dysfunction does this album feel less than all-encompassing—and the fact that Lorde is unable to have so much as a throwaway Instagram account dedicated to onion rings without the world swarming on her would safely explain why that is. That aside, though, she still manages to tap into the zeitgeist anyway, realizing, like Paul Westerberg before her, that modern Western youth is defined by a general absence of meaning. The former bastards of young have their own kids now, and—guess what—they’re fucked up, too.

“Loveless generation,” as Lorde calls them, spelling out each letter of the title word, “Loveless”—a song fragment that’s kinda twisted when you get into it (“I’m gonna mess your life up / Gonna wanna tape my mouth shut”). And that’s how it usually happens on Melodrama: It seems straightforward enough, and then out of nowhere she turns and there’s a quick line coated with something outrageously dark, or hurt, or lost. Like a reference to “[spilling her] guts beneath the outdoor light,” or a threat that she’ll “blow [her] brains out to the radio,” or the (sarcastically?) blasé admission of taking a ride from a mutual friend who “can hardly see”—who will likely cause her friends to “end up painted on the road, red and chrome, all the broken glass sparkling”—dismissing it with a tossed-off “I guess we’re partying.”

Lorde has described Melodrama as being a concept album about a night at a house party, but it’s really more about the idea of partying at large—how the act of going out is itself a form of hiding. (If you’re interested in a more literal interpretation of a concept album about a house party, Andy Shauf would like a word.) Fittingly, Lorde uses a central heyday of dancefloor partying—the ’80s—as a loose musical template; a Graceland-era Paul Simon appears as a vocal sample to start off “Loveless,” a ghost-ish version of Bruce Springsteen’s Telecaster can be heard at the end of “The Louvre,” and, even though Kate Bush comparisons are a dime a dozen these days, the brilliantly “incorrect” songwriting of “Green Light” truly warrants a nod to “The Big Sky” (the Melodrama cover, too, seems to call back the iconic Hounds of Love cover, both artists ambiguously reclined, either just starting their day or just ending it). It’s also worth pointing out that David Bowie, who believed that Lorde was “the future of music,” has his fingerprints all over “Liability”—a song that plays intricately with the crank-it-to-ten parlor sob that was perfected on Hunky Dory.

On that last track, Lorde delivers the heaviest line on the album: “The truth is I am a toy that people enjoy / ’Til all of the tricks don’t work anymore / And then they are bored of me.” The sentiment works within the context of the album’s party narrative, but it also applies as a moment of entertainment-industry self-awareness. Pop’s greatest commodity in 2017 isn’t guaranteed a spot back at the table in 2018, after all. Empires rise fast and fall faster in blind search of that green light. But it’s usually the ones aware of that fact who don’t need to worry about it in the first place.