From stilt-walking to viral rap videos, your guess as to where the “GLOW” star will appear next is as good as ours.
Menu

From stilt-walking to viral rap videos, your guess as to where the “GLOW” star will appear next is as good as ours.

BACKSTORY: A jane-of-all-trades (and master of all, too) shaking up preconceptions of what it means to be an entertainer in 2017
FROM: Born and raised in Tennessee, graduated from Emerson College in Boston, and now based in New York
YOU MIGHT KNOW HER FROM: Her role as fsociety hacker Trenton on USA’s Mr. Robot
NOW: She’s in the ring as Arthie Premkumar/Beirut the Mad Bomber on the Netflix series GLOW, which was recently renewed for a second season

“I did everything I could,” says Sunita Mani of her formative years in Dickson, Tennessee. “I was on the dance team, I played soccer, I played basketball, I was on student council. I loved putting myself out there, I think to overcompensate for the fact that I was so different. We were the only Indian family in town. I tried to fit in with lots of groups because I kind of didn’t know where I fit in exactly.”

Turns out the answer was “everywhere.” Mani earned a BFA in writing, literature, and publishing from Emerson College in 2008. She then moved to New York and studied improv at the Upright Citizens Brigade. Standup is about 180 degrees away from the comfort zone of many writers, so how did Mani go from observer to performer? “Academia at Emerson was so loose,” she says. “I realized kind of early on that I wasn’t going to get much out of it, so I poured myself into the extracurriculars. I was so in love with the comedy scene.” As Mani explored more and more, formal writing slid to the bottom of her list of priorities. “I couldn’t sit down and focus on it. I was too distracted and excited by the performances I was doing and the friendships I was making.”

Mani can dance, too: classical South Indian, jazz, clogging, you name it. “I loved song and dance [when I was a kid],” she says. “I felt like I was making people feel good. I really absorbed a lot of other people’s energy. I still do.” Since 2009, she’s been one-third of Cocoon Central Dance Team, a dance-comedy act that’s been featured on Broad City Live. Mani put those skills to exemplary use in the wacked-out video for DJ Snake and Lil Jon’s “Turn Down for What,” which blew up when it was released in 2013 and is creeping up on three quarters of a billion views on YouTube. 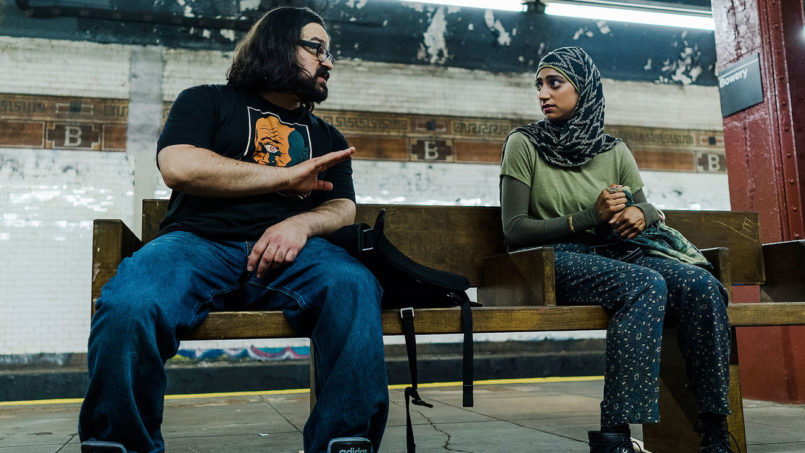 Her first major acting role was as Trenton, a hacker with the fsociety on the USA drama Mr. Robot. “It was a role I was cast in, I felt, because of my ethnicity, which was hard for me to understand. In the comedy and live performances I was doing, I felt so in control of how I was being defined, and then I walk into an audition and I was cast without a callback, and then I get to the costume fitting and I’m trying on hijabs.

“All in all, it was a very interesting learning experience,” Mani says of her early days on the show, noting that the Mr. Robot team is very secretive; she’s never quite sure what her character’s next move is until it’s about to happen. “I’m so grateful they wanted me for the role. It’s totally outside of my comfort zone. It’s such a cool, convention-breaking show.”

“GLOW has been really challenging in all the right ways.”

Mani was then cast in Netflix’s GLOW, based on the real-life Gorgeous Ladies of Wrestling—professional women wrestlers of the ’80s and ’90s whose personas in the ring played up all sorts of stereotypes. Mani plays Arthie Premkumar, an Indian-American med student who is hired to wrestle as an Arab caricature, Beirut the Mad Bomber.

Just like Arthie before her first performance, Mani was, understandably, nervous about the role. “It’s been really challenging in all the right ways,” she says. “I was terrified, but I definitely had an open door with the writers, who were so receptive, so thoughtful, so smart. They’re taking care of fourteen different women with totally different perspectives and making them dynamic and dimensional.”

While Mani has, true to her claim, seemingly done everything—including stilt-walking in a parade as part of a clown company and performing country music on a monthly live radio show à la A Prairie Home Companion that wasn’t actually broadcast anywhere—there’s still at least one more thing on her creative to-do list. “I really would like to make a dance movie. I love choreography so much,” she says. “I’m a huge Pina Bausch fan. It excites me always.” It’s clear that when Mani is excited about something, good things follow. Stay tuned. FL