The future within (and without) the prognosticatory, labrythine musician in five questions.
Menu

The future within (and without) the prognosticatory, labrythine musician in five questions.

“I’m like a switchboard, I’m like an operator,” Ariel Pink rattles over the line. “I’m basically a suicide hotline.”

Indeed, while mired in the incessancy of Pink’s spontaneous, firebrand monologues, one isn’t spared but a moment to jump. Today finds him, again, deep in the cut of what has been an especially incendiary press cycle (even by Pink standards) to promote the release of his brand-new double album, pom pom. Taking the cake of incidents thus far was the rumor that he spread about a collaboration with Madonna, which not only resulted in Twitter feuds with both the Material Girl’s camp and Grimes’ Claire Boucher, but also a coronation from Myspace as “Indie Rock’s Most Hated Man” (much to his delight). As quick as he is to expound on—and condemn—most anything, Pink is equally apt to stop on a dime and pivot his stance, occasionally wiping his footprints clean and blurring out his own foregone contradictions.

For those who were listening way back in the early aughts, when the guys of Animal Collective picked up that infamous dub of The Doldrums and Paw Tracks first put out those now-modern-classic Haunted Graffiti records, it would be virtually unfathomable that an Ariel Pink–Madonna collaboration would even be a viable concept (although the one does represent a sort of fractured shadow of the other). But where the maniacal swirl of pop perversions trapped on those early four-track tapes once told us all we needed to know about Ariel Pink, now he seems to relish his place at the eye of the same, externalized storm. Instead of awkwardly turning inward while onstage, willfully alienating his audience as he once did, he played conduit for one of the most deceptively adept and fluid combos in rock music, seemingly until this year. The Haunted Graffiti moniker has inexplicably vanished, despite an increasingly collaborative studio environment for pom pom, wherein Pink, the maestro, presides over the creation of his work like Hitchcock in drag, meticulously concealing the endgame of his many players’ parts from them until he has laid down the last vocal. For the reveal—what Pink calls “the a-ha moment”—we are given the most whimsical, shape-shifting, and gregarious record among his recent output. Yes, it’s that Ariel Pink, wacky ambassador for the new guard, singing schizoid jingles with an elementary-school chorus, gobbling up social media with a voracious appetite, making toasts to glory days, tearing those apart, and inventing the future on the fly. Just imagine the possibilities. 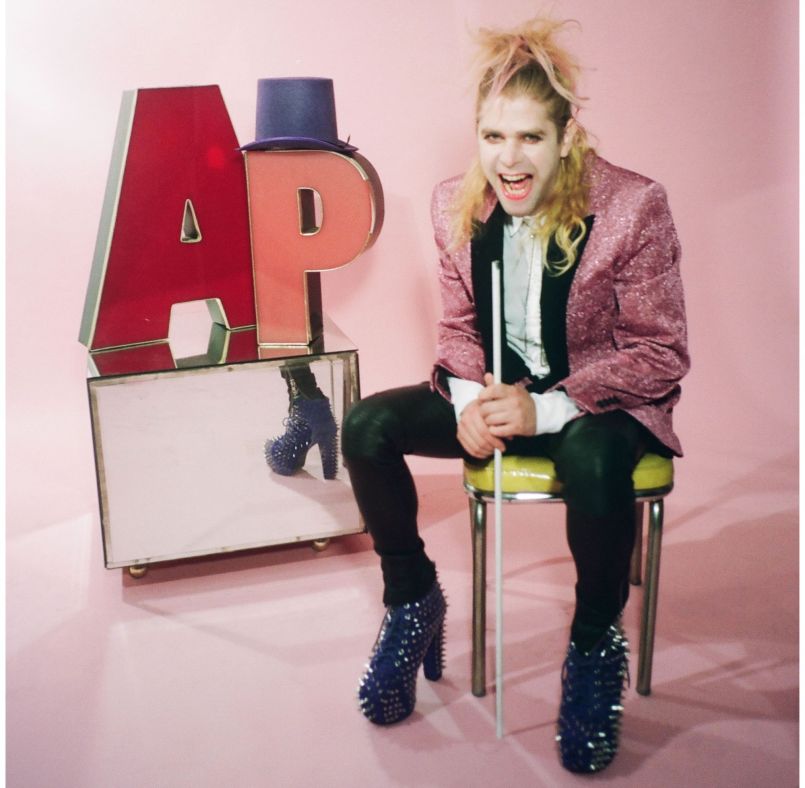 Can you compare your performances now and when you first started playing live shows, or is it a totally different feeling?

Yeah, there’s quite a bit of difference. I think of those times very fondly, but I have no recollection of the impressions that were being imprinted on me at the time. I was having my own mind blown in real time just being in a completely different environment, and I was more dazzled by the lights than anyone was dazzled by our shows. I was getting my bearings and figuring out what I didn’t like about everything. That took years to even admit to myself—that I wasn’t having a good time.

Sometimes I get that feeling now, but it’s definitely not what it used to be. Obviously, with time I’ve gotten better, channeling my spirit, just getting more focused. Also, the disappointments aren’t so disappointing anymore, so all this confers a lot more confidence to me and I have a great time now, almost by demand. I don’t have to worry about not being happy. I used to walk offstage back in the day—be very irreverent and apathetic to audience reactions. Of course, it was me being a sore loser. I’m still vulnerable, I still have mood swings; I just try to be more professional about it nowadays.

“As lifestyles and people become more connected and civilized…and the standard of living increases, people are going to get smarter and want to go towards love. It’s a very peaceful thing, until it isn’t.”

Technology is all over the place on pom pom. Are you feeling optimistic or pessimistic about our interactions with technology?

Well, I think that there’s so much crazy communication, and it can only be good for humanity to be on the same page. Everybody’s got high-speed Internet connections and we don’t have secrets anymore, and there’s mines and all that stuff, so that’s where it ends up. Or, even if they plant the thoughts directly in our minds without our permission, at least hopefully we’ll have the same program and we can evolve to be like ants and basically just carry out things with a hive mind for our own betterment, or for the betterment of some higher purpose, like saving the trees or whatever animal…the planet. But we should just do it together instead of having this sort of wily, schizophrenic spirit.

What would that type of progression mean for creativity and individuality?

I think individuality is exactly where we’re not going. I think things tend towards communism, inevitably. It’s not of our doing; it’s just as lifestyles and people become more connected and civilized, so to speak, and the standard of living increases, people are going to get smarter and want to go towards love. It’s a very peaceful thing, until it isn’t. The irony about that is the more people that are rich—and are in on the deal and reaping the benefits of the better values—those riches are going to be more depleted. In fact, they’re going to be non-existent if they’re ubiquitous across the board.

“I think that all the information and everything that we experience is going to be filtered through this one thing, called ‘Google’ or whatever… Then, it’s a hop, skip, and a jump, and the main computer goes down. Whoops!”

So I think we’re going to end up somewhere close to communism at best, with individuality stamped out. If not that, then we’re going to go the opposite way, with individuality being precedent, and a very few people killing off the rest of the world and trying to duke it out with themselves. They can live in their bunkers or whatever-the-hell, and procreate with their cousins. Give humanity a fresh start, and maybe start over again with some new truisms instead of the false ones that we’ve been keeping with us.

I think that all the information and everything that we experience is going to be filtered through this one thing, called “Google” or whatever. It might be in your iGlass, it might be a computer chip. Then, it’s a hop, skip, and a jump, and the main computer goes down. Whoops! And then, can’t retrieve it, and that’s it. Then we start over again. That to me is really awesome. The sooner we go to where we’re headed, the better. That’s why I always vote for the winner. I’ll vote for Mitt Romney if it means that we can go faster to where we’re headed. Bring it on. 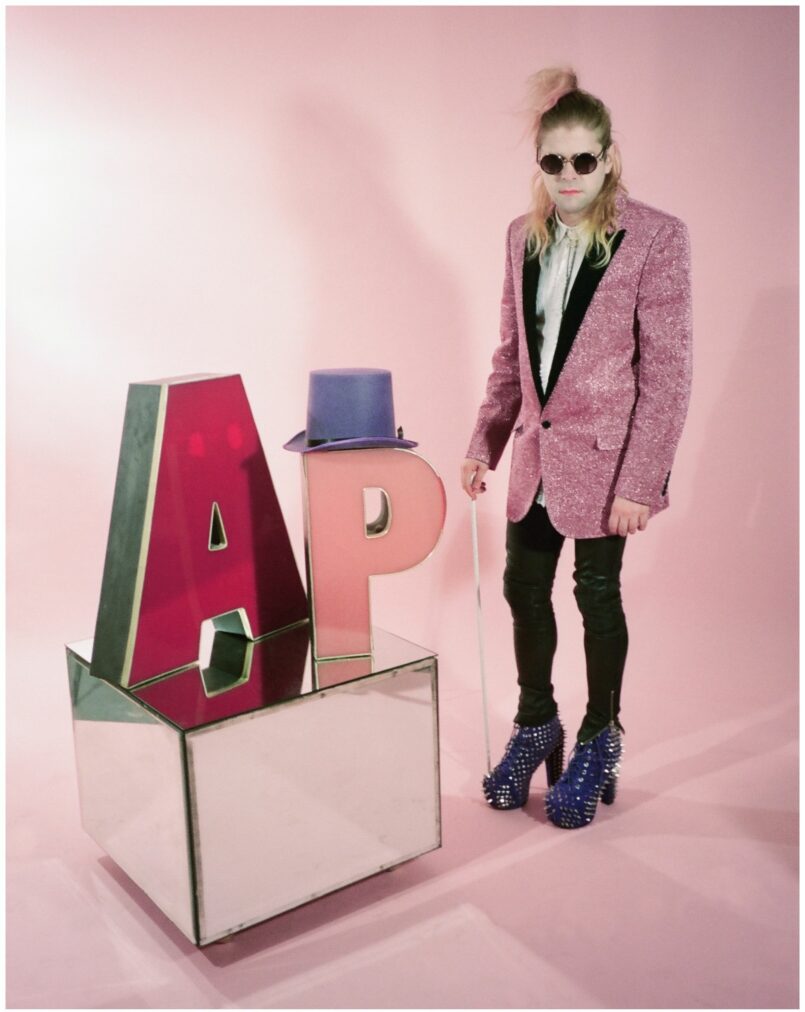 A couple of the tracks like “Picture Me Gone” and “Dayzed Inn Daydreams” premeditate a post–Ariel Pink existence. Do you think you’d like to be a father someday?

I think that I would totally like to be a father, funnily enough, but it’s not up to me so much. Although, I suppose it is—I could definitely bully some girl into having my baby. Or, not bully her, but seduce her, sweep her off her feet with some promise of being there, and… I don’t know. I would like to bring happiness to somebody else’s life besides my own, of course. I think mothers around the world need to have kids, because I think they’re programmed for that. If not, they can duke it out with us in the workforce, you know, being individuals, if that’s what they want. But I think it’s a partnership, and it’s worked in other places throughout time that way for a reason. I just don’t think that there’s anything disgraceful about having children. If anything, men and women should hold it in high esteem. They shouldn’t see it as an inconvenience on their individuality or their chance for autonomy to exist in the world. Although, it’s easy for me to say because I’m a guy and I can’t have babies. But I would love to have babies, because it would bring some meaning into my life to know that I had some sort of link to the future in a physical sense. But that’s just an abstract wish of mine.

“…It would bring some meaning into my life to know that I had some sort of link to the future in a physical sense.”

Who knows if I’m actually the dad? These are all things that I would have to have faith in. I’ll get the phone call, and I’ll buy it—hook, line, and sinker—because I so want to believe it, but really, it could be mine, it could not. It’s a faith thing. I think a father is a father by just being who he is, and doing what he wants, and these are all very old-fashioned concepts that are very unfashionable with me—I mean, uh, the world. I almost say them with a slight tinge of fear, like my shoulder’s creeping up just waiting for the bat to hit me upside the head, drag me out into the street, with a thousand lesbians just kicking my ass.

Is the speaker in “Lipstick” also the killer?

I say that, right? “I am a possum / I cross the street / I lie and wait until sundown / I saw it happen / I saw you murdered / I watched the knife as it went down into your breast / And now you’re running around and around…” Yeah, of course. I’m definitely the bitch with lipstick that’s sexing himself up in the shower, whatever, and I’m the serial killer. Absolutely. That’s the style, it’s fucking Silence of the Lambs or whatever you want to call it. It’d be the tranny, the tranny dude…

Yeah, the guy who’s a girl, but he’s like more than a guy, and much more than a girl. He’s the scariest motherfucker that you’ve ever fucking met. He can fuck you up, man. You just don’t fuck with these people. They know. FL