LIVE: Run The Jewels Reign at The Regent Theater in Downtown Los Angeles (1/14/2015)

With support from buzzed-about UK trio Until The Ribbon Breaks

The recently re-opened, refurbished Regent Theater is the latest in a series of historic theater revitalizations in downtown Los Angeles; the 1927 United Artist Theater is a part of the Ace Hotel, the 1917 Rialto is currently an Urban Outfitters, the 1926 Orpheum (one of the first to get a detailed restoration) has been screening films and hosting performances for over a decade, and now the 1914 Regent on Main Street joins the ranks of its fellows a few blocks up on Broadway, having been acquired and restored by the Knitting Factory and Spaceland Presents entertainment groups. 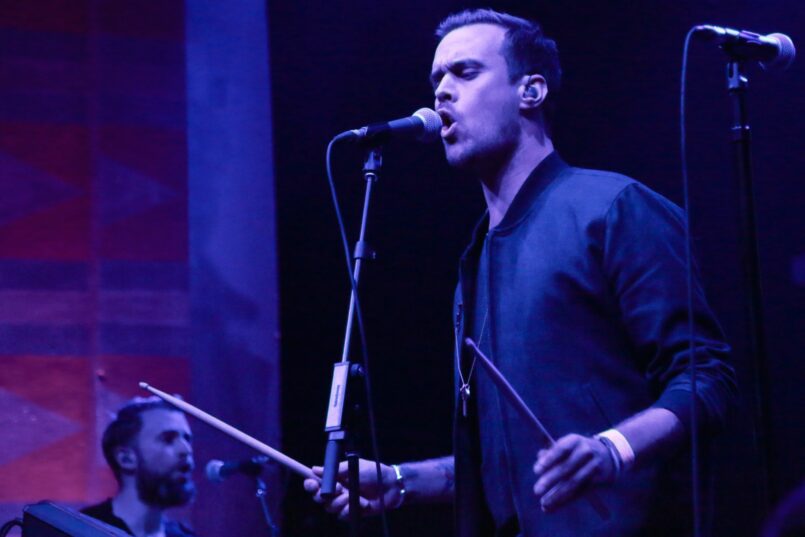 The cozy venue—with a sunken GA floor and lofted upstairs mezzanine—filled its sold-out capacity (and then some) even before opener Until the Ribbon Breaks had taken the stage. The beat-laden, downtempo UK band, who will release their anticipated debut next week, were a bit of a sonically odd pairing next to the ferocious, high-energy rap performance of headliners Run the Jewels (the artists have traded guest appearances on one another’s singles), but the trio seemed to embrace the fact. Grooving through their set, lead singer Pete Lawrie-Winfield loosened up the crowd, emoting and widely gesturing through singles “A Taste of Silver” and “Romeo,” as well as a slightly off, slowed-down cover of Blondie’s “One Way Or Another” (which took all the fast-paced fun out of the original, and was particularly ill-suited to a packed house of rap fans). However, the crowd was visibly livened by a couple of Until the Ribbon Breaks’s superb synth/sample-heavy songs, including the Homeboy Sandman–guesting “Perspective” and the, yep, Run the Jewels–featuring “Revolution Indifference” (which the duo only made an appearance on via a screen and disappointingly not in reality). The atmosphere of this particular show aside, Until the Ribbon Breaks’s breathy, drum-machine pop will find a much warmer and appreciative audience as the band re-joins their tour mates London Grammar on a massive tour that stretches into the springtime. 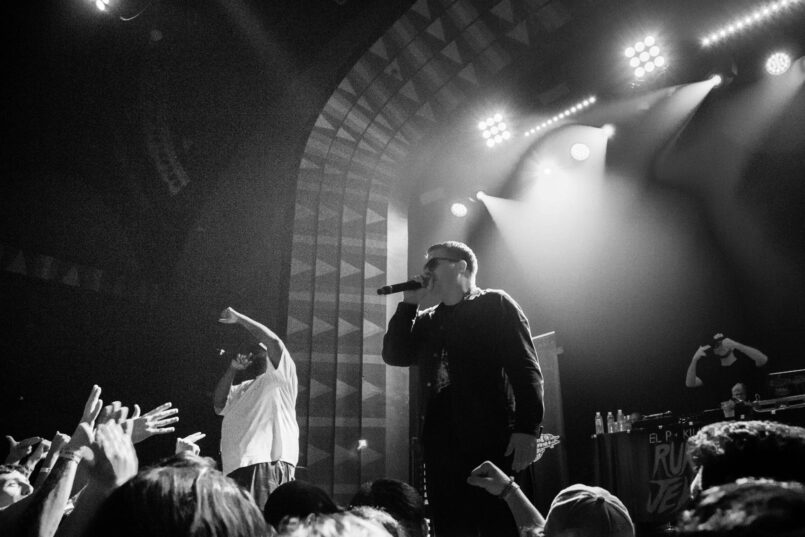 And then came Run the Jewels. Riding a massive high at the moment—landing on numerous best-of 2014 lists, a recently announced appearance at Coachella, and confirming Run the Jewels 3 for this year—this was the pair’s third LA appearance in five months. Killer Mike and El-P emerged triumphant, as they are wont to do, to “We Are the Champions” and kept the crowd lifted to their level at every verse. The pair treated the Regent to flows from their debut (“Run the Jewels,” “36” Chain”), but leaned heavily on material from the staggeringly brilliant Run the Jewels 2 and the highlights came in “Lie, Cheat, Steal,” “Oh My Darling Don’t Cry,” and “Close Your Eyes (And Count To Fuck),” in addition to guest appearances from Boots (“Early”) and Gangsta Boo (“Love Again [Akinyele Back]”). The duo manages to come off both humble and self-assured, co-conspirators that command all angles of the stage at all times, with lyrics that inspire and delivery that incites—and with that combination intact, there is no one in the game that can touch them.