At 50, the French musician’s made his third solo album and lives contentedly in Paris, far away from the scene.
Menu

At 50, the French musician’s made his third solo album and lives contentedly in Paris, far away from the scene.

Nicolas Godin attributes many things in his life to being French. Better known as one-half of the electronic pop duo Air, he is pragmatic, tribalistic, and funny. “Life of a musician, so glamorous,” he chuckles as he looks for flight cases for his keyboards online. Godin is ready to hit the road to support his third solo album, Concrete and Glass, live—even if he never intended on being a solo artist in the first place.

Godin is content to stay home in the center of Paris by the Eiffel Tower, living just half a mile from where he was born. He speaks longingly of the South of France but won’t move to its sparkling beaches and majestic mountains because he doesn’t have friends and family there—and he has a standing Sunday lunch with his brother and mother in Versailles.

“French people are very hard to move,” he says. “In America, if you find a job somewhere and it fits, you go there. It seems people only see their families at Thanksgiving. French people don’t want to get away. Every Sunday I run in the park of Versailles with my dog, then I go to lunch with my mum. Nice bottle of wine, nice food, then half an hour drive back to Paris. I wish I could live in Versailles, but there’s nothing to do there at night, there’s nowhere to go. It’s not Paris. You don’t have a house with a pool and dogs running around the yard in Paris. You live in a flat with a bunch of people around you. But we have good restaurants and we have culture. Paris is sexy.”

As he’s living a stress-free life in Paris, Godin’s solo albums have not exactly been planned. His debut, Contrepoint (2015), was a reaction to studying Johann Sebastian Bach and Glenn Gould. His second album, 2018’s Au Service de la France, was the soundtrack for a television show, a commission tasking Godin with creating an homage to classic composers of the ’60s such as Lalo Schifrin. An “exercice de style, savoir faire, nothing original,” as Godin puts it, throwing out French phrases to explain the impetus behind Au Service. “It was not supposed to be an album. But it was fun and I like it.”

His third, Concrete and Glass, was also unplanned, though it does have a dominating concept. Godin’s friend Xavier Veilhan, a French multi-disciplinary artist, was doing a series of exhibitions called Architectones in 2013 and 2014 in well-known buildings across various countries including the U.S., Russia, Spain, and France. These spaces were all designed by famous modernist architects like John Lautner, Richard Neutra, Konstantin Melnikov, Claude Parent, and Paul Virilio—and Veilhan asked Godin to soundtrack the exhibitions.

“I don’t have an agenda for making albums—it’s more to have a snapshot of my life at the moment I make them.”

“I always thought music and contemporary art is very pretentious, more like sound design than real composition,” admits Godin. “Every time I go to Musée de Montmartre or to Centre Pompidou, I hear music in exhibits and it’s always this noisy sound design, atmospheric, but kind of boring. I wanted to do the opposite. I wanted to make a pop album that you can listen to in cars and sing in the shower.

“When the exhibits were finished,” he continues, “I thought I needed to leave an archive, a trace of what I did. I don’t have an agenda for making albums—it’s more to have a snapshot of my life at the moment I make them.”

In album form, Concrete and Glass is a different creation than what Godin composed for Architectones, not dissimilar to Air’s synth-y and sensual space pop. He brought in vocalists to respond to what he’d already made, making sure they knew they did not have to reference architecture. Godin tried to pick young artists for the vocals, combing YouTube, going to shows in Paris, and DMing people on Instagram. He ended up with a stellar selection that includes Kate NV, Kadhja Bonet, Kirin J Callahan, Cola Boyy, and Alexis Taylor of Hot Chip.

“I could be the dad of a lot of people who worked on my album,” he says. 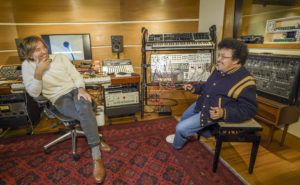 Godin had a different approach with each building in the exhibition compositions. Claude Parent’s and Paul Virilio’s L’église Sainte-Bernadette du Banlay, a brutalist, concrete church that is influenced by war bunkers, is marked simply by Godin playing the bass. The monolithic concrete structure has so much reverb, no other instrument would have been possible. (“The paradox of the album title is that concrete and glass are acoustically the worst elements for music,” he explains.) Once he had the melodies, harmonies, and chords for all the exhibitions, Godin’s goal was to translate those into songs that would be listenable without any context.

Godin has a degree in architecture, though he never worked in the field. As he was graduating high school, he tried music without success and ended up turning to architecture. His father is an architect as well, so it came naturally. But upon graduating college, Godin gave music one more shot—with Air—and this time, he had success.

“I loved my life before Air,” says Godin. “I was twenty-seven years old when the first Air album came out and I had a normal life. I really enjoyed not being a musician. I liked my life in Paris. I had a nice girlfriend. I had nice friends. I didn’t need to be a professional musician. When Air became successful, it created more problems. It made life really complicated.”

“The magic I knew with Air is now when I go on stage, not when I go in the studio. We’re in the live business rather than the record business.”

Be that as it may, there is always interest in Air, including in new music—which, according to Godin, is not forthcoming. “Being a musician and getting older, it’s not easy,” he says, having just tipped the half-century mark. “I don’t have any examples of artists I love growing old making great records. When I make records, I’m always worried if what I’m doing is good. Is it relevant? Does it have a raison d’être?

“Air, we have a good back catalog and we are going to do great shows until we are eighty years old,” he continues. “But I’m not sure we can make great albums until we are eighty. After a certain point, you have a legacy career. Before that point, you have a creative career. What I tried to do with Concrete and Glass was be creative, and I hope I nailed it. With Air, if I feel we can make an album that would be as good as the old ones, I would do it. The magic I knew with Air is now when I go on stage, not when I go in the studio. We’re in the live business rather than the record business.”

What Godin says is true, though rarely heard from a musician. Musicians who are irrefutably in the legacy portion of their career continue to make new albums, and more power to them. But when it comes to touring, the new music makes a tiny portion of the set list; one or two songs at best, if at all.

“In America or in England, the music business is such a business,” says Godin. “In France, we are more philosophical. We’re isolated and don’t have music business pressures. We don’t have business meetings at lunchtime in Hollywood. We can be honest with no problems because it’s not a big deal here. I wouldn’t say that if I were a fashion designer or a film director or a famous decorator. And if I lived in Los Angeles, I would have this positive attitude and be productive and have a lot of meetings. People forget, we’re going to die. In twenty years, I’m going to be an old person. I don’t want to lose my life to run it.” FL 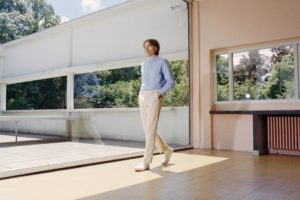