Built to Spill, “Plays the Songs of Daniel Johnston”

Built to Spill, “Plays the Songs of Daniel Johnston” 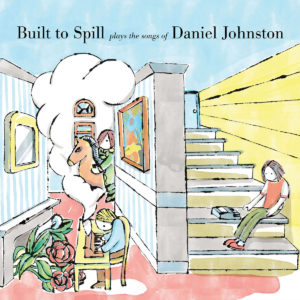 To say that Daniel Johnston and Built to Spill are two of American indie rock’s most revered artists would be an understatement. On paper, they might not have all that much in common, though actually, there’s a common thread that doesn’t just run between them, but actually binds them together. While Johnston, who died last September, and Doug Martsch, Built to Spill’s only permanent member, took very different approaches to their music, both made it in an attempt to traverse the wide emotional and philosophical complexities of being human.

Johnston—who suffered from schizophrenia and bipolar disorder, and who became one of the most prominent and significant figures in the world of outsider art and music—framed those existential, lovelorn questions with incredible childlike innocence. Martsch’s songs, on the other hand, are slightly more cerebral investigations of those things—broken minds and hearts investigating what it means to be alive in a broken world—but full of the same forlorn poignancy and desperation that crackles through Johnston’s music and delivery.

To some extent, it almost feels like Martsch is possessed by Johnston himself on the eleven covers that make up Plays the Songs of Daniel Johnston. Even his vocals—which often sound uniquely like Johnston’s—contain distinct shadows of Johnston’s timbre, especially on the moving, heart-aching chug of “Tell Me Now” and the angst of “Life in Vain.” And while the playing is more polished and proficient, less raw and ragged, than Johnston’s ever was, his playful spirit is most definitely here, listening, smiling, nodding along to his own songs.

What makes this album even more interesting is that Johnston’s greatest hits—as much as they were, anyway—are absent. There’s no “Living Life,” no “Walking the Cow,” no “Casper the Friendly Ghost,” no “True Love Will Find You in the End.” But that doesn’t matter, because that isn’t the point. Listen to the way Built to Spill channel the plaintive yearning of “Honey I Sure Miss You” or “Impossible Love” and the sheer scope of Johnston’s talent—and, more importantly, his deep understanding of life and love and human sadness—shines brightly and beautifully. A stunning tribute to a truly one-of-a-kind visionary.