The Detroit post-punk group’s fifth album “Ultimate Success Today” is out this Friday.

In stark contrast to its title, Ultimate Success Today—the fifth full-length from Detroit’s lugubrious post-punks Protomartyr—is a deeply dark album riddled with chaos, neurosis, illness, angst and anger about the state of the world. And rightly so. Yet while these songs are a fitting reflection of an America that feels like an empire on the verge of collapse—with an explosion of documented police brutality and murder, and the subsequent riots against the systemic racism that drives it, and the utter mishandling of the coronavirus pandemic, which continues to spread at alarming rates across the country—they were all written before that stuff really started spiraling out of control.

In fact, the initial inspiration was frontman Joe Casey’s own physical ailments, coupled with the usual existential dread that tends to reside within him. The result is a harrowing record both sonically and lyrically, one that sounds as much like the product of a terrifying David Lynch nightmarescape as much as it reflects the actual horrors of the real world—a far cry, as Casey explains, from the “happy” record he hoped it might have been.

You wrote the songs on Ultimate Success Today a while ago now. Are you surprised how well they fit into the dystopia of the current moment?

I guess that’s just my dumb luck. That’s one of the things when you write about the ills of the world—you’re always considered psychic because they’ll always come up again. Police brutality didn’t just happen this year. It’s an ongoing thing. So you write about it and then it becomes news. I didn’t realize when I wrote an album that has a lot of sickness in it that the whole world would get sick like this. That was not planned!

What exactly is that sickness? Is it something you experienced that you’re projecting onto the state of the world?

It was physical ailments. I’m frightened of doctors and don’t like going to see them at all, which is a bad thing if you’ve got something wrong with you—instead of finding out what it is, you just kind of let it stew and start wondering, “Is this the big one?” or whatever. The general thing is that I’m in my forties now and I wouldn’t say I’ve been treating my body well. I don’t think I’ve ever exercised a day in my life, so it’s one of those things where your age starts catching up with you, and the first warning sign that I maybe need to start eating leafy-green things and cut back on the drinking and get eight hours of sleep if I can, maybe start walking.

“That’s one of the things when you write about the ills of the world—you’re always considered psychic because they’ll always come up again.”

But the mindset I was in when we were writing the album about a year ago is that I was dealing with this sickness and it was affecting the way my brain was working—I couldn’t think straight, and I was having very morbid thoughts, and that seemed to match the mood of what I saw going on, but it seemed like I could write through it. Or at least try to. I try to express what I’m feeling on albums, and this was the album where I was feeling very sick, so I thought I should try to address that as opposed to avoid it. Every time we start an album I’m like, “This is going to be the one that’s full of happy songs” and it never ends up that way.

It is a very bleak album, but in a Lynchian kind of way. There’s this strange vision of the world that isn’t quite reality, but is a reflection of it that exists in black and white, rather than the Technicolor world we actually live in. Did you have a visual aesthetic in mind when you were writing it?

Well, with the David Lynch thing, I will say that Eraserhead came out of his worries about being a first-time father—it’s not like his kid was an actual deformed monster. And I think that’s kind of the best writing. I don’t like straight science fiction, but I like it when the way a person’s brain works is how they perceive the world, and if they’re particularly suffering, then they’re going to see the world as this kind of bizarre place. So on a song like “Tranquilizer,” I really wanted to capture how it feels to have a sharp pain, so you try to think about feeling ill using your brain, but the pain is negating that and it’s corrupting all your thoughts and you’re just looking for relief from that. And that can be applied to not just physical pain, but societal pain as well. It’s a way to apply that kind of idea to a lot of different things, I hope. 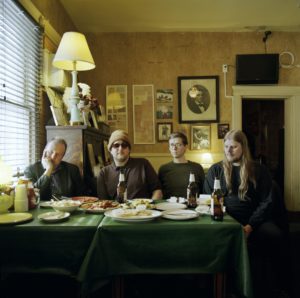 That song specifically seems very stream-of-consciousness compared to others on the record. They’re more abstract, perhaps, but this one seems like you’re just blurting out everything you’re feeling all at once.

Yeah, for that one, the band had played that song for a while and I kind of had, like, the cadence down, but I didn’t know exactly what the words were going to be, and I didn’t want to write it down because it reminded me of the way on the first record we ever did, half those songs don’t even have lyrics because I kind of just made it up on the spot. I wanted to kind of recreate that again.

Now you have to write stuff down because you’ll put something out and the label will go, “OK, we need a copy of your lyrics,” so you’re like, “OK, I guess I’ll listen back and try to figure out what the hell I was saying.” But it’s a different approach, and it helps me avoid being too writerly about things.

Was any of this a reaction to the reissue of No Passion All Technique and listening to that again?

Yeah. It was basically trying to take what was good about that and discarding what was bad about it. But what was good about it was that there was a spontaneity, and there was a sense of “This is it—let’s record as many songs as we know, let’s get it done in four hours, this is Protomartyr’s album.” You’re not planning on the fifth record when you’re doing the first one. And I wanted to apply that good-natured stuff to this one, because now the band is really good at playing their instruments. There’s a sloppiness on that first album that can be endearing, but also—it’s sloppy. And now the band is tight and can do a lot of different things. They’re better, and I’m hopefully better at what I’m doing. Or at least able to accept my limitations and see if I can apply them to a new album.

“Every time we start an album I’m like, ‘This is going to be the one that’s full of happy songs’ and it never ends up that way.”

There definitely seems to be a preoccupation with not just death, but the legacy that you would be leaving once you’re dead. Is that something that’s always concerned you, or has that come with the reckoning of being in your forties and feeling that sickness that you mentioned before?

There was always the malaise and existentialism! But with illness and, at least for me, getting older…the future when you’re young is always wide open. You can calm yourself before you go to sleep by thinking, “Where am I going to be in ten years?” That can give you a thrust in life. And I now realize what a mid-life crisis is. I’m not going to go out and buy the sports car because I don’t have the money to buy the sports, but the midlife crisis is that you realize there are more days behind you than there are ahead of you, and you kind of have to grapple with that. I hope that it doesn’t get worse as I get older, and that I come to accept it.

It’s a weird time, because you learn not to dwell on the past, but you’re also frightened of the future, so all you have is the present. Which is why it’s “ultimate success today.” And at  the end of it you hope that you can seize the day, as corny as that is. With “Worm In Heaven,” the music sounded so beautiful, I felt if I’m going to write a swan song or a farewell address, I might as well do it now and get it off the books, so I don’t have to worry about that later on. They can play this song at my funeral now, so maybe I can think about other things. It’s a way to confront these weird feelings, get them down and then hopefully I won’t dwell on it—and the next album will be the happy one! FL