In Conversation: Bright Eyes Persevere on “Down in the Weeds, Where the World Once Was”

Conor Oberst, Mike Mogis, and Nate Walcott discuss how picking up where they left off in 2011 has been a source of comfort for them.
Menu

Conor Oberst, Mike Mogis, and Nate Walcott discuss how picking up where they left off in 2011 has been a source of comfort for them.

It’s been nearly a decade since Bright Eyes, the band started by Conor Oberst in 1995 when he was just fifteen, released The People’s Key, their ninth full-length. While most sources claim that the band (now solidified by longtime collaborator Mike Mogis and Nate Walcott, who first started recording with Bright Eyes in 2005) stopped in 2011, those in the know are aware that that’s not the case—Bright Eyes never dissipated or dissolved. There was just a lot of other stuff that happened in that time: Oberst released three solo albums, the second record by his hyper-political punk band Desaparecidos, as well as last year’s debut by Better Oblivion Community Center project, a collaboration with Phoebe Bridgers. Mogis continued working as a producer and musician, often collaborating with Walcott, himself an in-demand session and touring musician and arranger, who played live with the Red Hot Chili Peppers between 2016 and 2019 (which may explain the Flea feature on the new Bright Eyes record).

There were personal obstacles, too. In 2017, Oberst separated from his wife. They were recently divorced, as was Mogis from his wife of twenty-three years. In 2016, Oberst’s older brother Matthew died. All of that turmoil, coupled with the global rise of right-wing populism, is the vague setting for the band’s appropriately titled Down in the Weeds, Where the World Once Was.

Don’t call it a comeback, though. The record—which, truly, is one of the best the band has ever made—is merely a continuation of where they left off, a reflection of the world and the suffering, on both macro and micro, political and personal, levels, the result of what they’ve said just became the right time to make a new record. Interestingly, the album’s fourteen songs do seem to be set in a tangible reality, rather than the mystical world Oberst’s lyrics have conjured up so profoundly in the past. Talking to and among each other, the trio are in fine fettle, clearly enjoying the fact they’ve been making music together, and—publicly, anyway—happier than the songs on the record, the events leading up to it and its pessimistic, defeated title would otherwise suggest.

How  does it feel to be back?

Conor Oberst: Does it feel like we’re back?! I would say it feels good to be back, but we obviously never stopped being in each other’s lives—Mike and Nate collaborate on film and scoring stuff all the time, and they’ve both worked with me on solo project stuff over the years, so we were never that far away. But, obviously, making a Bright Eyes record feels different than all those other interactions. It’s a little more involved and more collaborative.

It always felt like Bright Eyes existed in its own special, almost mystical, world full of these characters that weren’t quite real, but weren’t totally imaginary either. This album sounds much more planted within the context of the actual world today. Is that a fair assessment?

CO: I think so. All of the lyrics are, to some degree, coming from my worldview, and in that sense they’re autobiographical, though obviously some lines are more autobiographical than others. I always think of them as composite sketches blending some experience I had myself with an experience that one of my friends had—or something I read about or thought about. I think that’s kind of the magic of songwriting, that it can be all those things at once. It doesn’t have to be cut and dry—and in the end it’s going to be up to the listener to interpret it and take it into their own lives. But the last record lyrically was definitely way more cryptic, and the language was way more dense, so perhaps in that sense this one is more straightforward lyrically.

“Making this record and being in Bright Eyes—it seems like part of an identity for me. And bringing all that back after a decade gave me at least a sense of self-worth.” —Mike Mogis

Did it feel in any way like a rebirth? Mike, you said it gave you a sense of comfort in a difficult world.

Mike Mogis: It gives me great pleasure to create music with these dudes. And that’s comforting. At the time when we started making this record, I was going through a divorce and all that bullshit, and having relationship issues—although making music isn’t that therapeutic, really. It’s just a distraction so you don’t think about all the other stuff so much. I guess that’s comforting, but it’s a perverse sense of comfort.

Why do you feel making music isn’t therapeutic?

MM: Because at the end of the day, you’re kind of still you, and you have the same issues. When you’re playing shows and making records and exercising the creative mind, I guess in that sense it is a little therapeutic because you’re not dwelling on stuff.

Nate Walcott: It gives you something to focus on.

MM: Yeah, as opposed to like, “Man, how many bad decisions am I making in all this?” I guess I’m not really articulating it well, but I just meant when you’re done doing that, are you any better? I’d say probably not. But that’s a negative way to look at it. 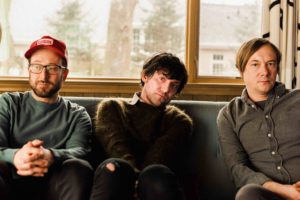 NW: The process of being in the studio and making stuff can have its ups and downs, and can be as therapeutic and rewarding as it should be—and as wonderful as it can be to be immersed in the process, there are times when it’s frustrating.

MM: This record gives you a sense of purpose, and that can be therapeutic, but your personal issues are still there. Because it had been so long, the process of making this record…I feel like I’m getting too negative.

Is that necessarily a problem?

MM: I don’t know, but I’ve been working on trying to be more positive. But it was a comfort. Making this record and being in Bright Eyes—because we’ve been doing this for twenty-plus years—it seems like part of an identity for me. And bringing all that back after a decade gave me at least a sense of self-worth. It gave me a sense of, “Oh wait, I am the guitar player in a band—I kind of forgot about that!” Because one of my favorite things to do is make records with Conor and Nate, so this was just the right time.

There’s a real sense of perseverance within these songs. The record’s first lyrical track, “Dance and Sing,” opens with the line, “Got to keep on going like it ain’t the end,” which seems to set the tone for the whole album.

“I always find that if I have a life experience, it’s not going to come out in a song the next day. It sort of has to live in the storage area, in the basement of my brain where I stash all that stuff, and then eventually there’s a day when those observations will come back unexpectedly through a song.” —Conor Oberst

CO: Yeah, I was pretty adamant about that song being the first proper song on the album because of that first line. Because I thought that’s a decent statement for the record. The idea that there’s a lot of loss in the world on a macro level, and obviously on a micro level in everyone’s personal lives—like we’ve all experienced loss, and your choices are to give up or move toward resilience and eventually acceptance, and I feel like that’s the better path if you have the energy for it.

Is that something that took you a long time to learn? Because that’s not really present on the earlier Bright Eyes stuff…

CO: I mean, I’m still learning it. That’s the thing—I do think that this record has a lot of hopeful messages, even though it sounds like it’s talking about a lot of bleak stuff. And there’s positivity in that.

Did you find that your personal experiences channeled into these songs? You talk about your brother at a couple points, as well as your ex-wife.

CO: I would say subconsciously, yes. I always find that if I have a life experience, it’s not going to come out in a song the next day. It sort of has to live in the storage area, in the basement of my brain where I stash all that stuff, and then eventually there’s a day when those feelings or experiences or observations will come back unexpectedly through a song. It’s still kind of mysterious to me.

“In the midst of impending doom and encroaching fascism, there are all these other elements that speak of perseverance and happiness. And I think something that also helps in this moment is that it’s fun to listen to.” —Nate Walcott

Are you happy that this album fits in so well with this dystopian situation that the world is in in 2020?

CO: Personally, no. I’m not happy about it at all. [Laughs.]

NW:  I guess if you look at it from a strictly lyrical standpoint, it covers a lot of territory, and it certainly speaks to some of those issues that are part of our current dystopian apocalyptic reality. But in the midst of impending doom and encroaching fascism, there are all these other elements that speak of perseverance and happiness. And I think something that also helps in this moment is that it’s fun to listen to. No matter how heavy the issues are, we want to make it really fun and interesting to hear. Hopefully in that sense it can have some sort of space in our current reality that is of use.

MM: I think that’s a good point, that putting out music right now is one of the things that gives some sense of normalcy. We can’t tour or whatever, but I’m glad we’re putting out this record now so we can move on to the next thing. FL