Kivel’s new LP is his memory map of LA, so we invited him to walk us through his version of the city.
Menu

Kivel’s new LP is his memory map of LA, so we invited him to walk us through his version of the city.

Experiences from Jesse Kivel’s three-plus decades in Los Angeles and Santa Monica pervade his punnily titled new album Infinite Jess, but Kivel moved out of the City of Angels shortly before announcing the LP back in September. When we speak about the album in late September, Kivel calls from his new home in Maine, where wildfires and poor air quality aren’t a concern. “Los Angeles right now is kind of a hellscape,” he says, but on Infinite Jess—on which he melds elegant lounge music, debonair dream pop, and ample Wurlitzer into a reflective balm—the city provides a gorgeous path through his past.

During our chat, Kivel agrees with the suggestion that, throughout the album, he fossilizes the LA and Santa Monica he grew up in, even on the songs with no lyrics. He says that with Infinite Jess’ woozy instrumental cover of Don McLean’s “Vincent,” he aimed to capture a “decaying memory”—namely, one of him first hearing a kid-friendly version of the song while in first grade at Santa Monica’s Franklin Elementary School. The bass-slapping but calming instrumental “A Sharper Image” is named after oddities retailer The Sharper Image because, growing up, Kivel would go to the brand’s Santa Monica store and rotate among the massage chairs. It was very “mall-culture,” he says, fittingly so for a middle-class kid in a wealthy area: “You could try everything, but it was too expensive to actually ever buy anything.”

As we discuss the role of mall culture in adolescence, Kivel mentions the Santa Monica Promenade. It winds up being a key stop among the LA spots he walked FLOOD through in the run-up to Infinite Jess, his memory map of the city and the lessons it’s taught him. Below, join Kivel on his LA tour.

That was the closest hub of activity. I went on my first date to a movie, Charlie’s Angels, there. [Laughs.] I moved about an hour away post-college and never moved closer. I rarely went to the promenade after that…but my son loves the Metro, so we took the Metro from Highland Park…all the way to the promenade and met my dad and my brother there, and we walked to the ocean and then came back and had lunch. It’s unrecognizable. They’ve redone the whole thing. A whole new era of certain shops have opened up.

The promenade was never really mom-and-pop. It was always this transient, touristy, corporate place, and being adaptable kids, you make that your life… Because it isn’t beloved, it just was where I had my childhood, the transition…rarely makes me sad.

What LA venues have you seen struggle or go entirely under during the pandemic that feel like a gut-punch?

Zebulon. They came to Frogtown and carved out a niche rather quickly and [were] a welcome addition to Los Angeles. It had the right mix of bringing in interesting and adventurous music, a really nice bar scene, and it was close to my house. It was a shame because you’re like, “Man, they have momentum…they’re doing the right thing,” and to not be rewarded for that is really unfortunate. 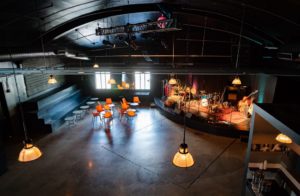 What were some of the best shows you saw there?

I like to see friends perform. My friend Matt who has this project called Big Search, he used to be in the group Foreign Born—he’s actually on [my] record, he’s on two of the tracks, “Burning Man” and “William.” He did a show there, and…he did this cover of this old Italian track [“To Feel In Love” by Lucio Battisti] and it was just stunning. I went home at midnight and bought the album on Discogs.

I find it interesting that we’re talking about an LA show, but this cover you went home and searched isn’t at all related to LA.

That’s what was so cool—and hopefully will still be cool—about Zebulon. They were into really interesting world and international programming…people would show up, a certain built-in audience, to the venue to see whatever they were programming. I think that’s the power of a really important venue. People come because they trust the venue as a curator.

It often sounds like you’re creating a memory map of LA with this album, and on “R&D Kitchen,” you talk about the area like only a local would.

On the record, the most overt place is R&D Kitchen because that’s a restaurant in Santa Monica on Montana [Avenue], and it’s just a funny place to be. I like places that are a little bit frozen in time…there’s something out of sync with modern society with that restaurant, but there’s something cool about it as well. 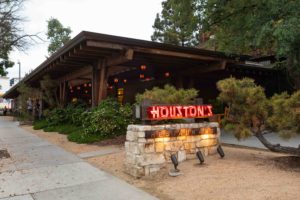 Even if it’s out of sync with modern society, how much does it feel like part of LA to you?

For me, it’s essential LA. If I’m being honest about my upbringing in Santa Monica, what really exemplifies that fabric is a place like R&D Kitchen that’s ’90s era swanky, intense customer service, and somehow it’s bustling, but it’s not hip. R&D Kitchen will continue [post-COVID] because it’s a part of the Hillstone Group, which is…a small corporation, and so places like that are insulated.

The truth is, R&D Kitchen lyrically is the reason the song is called “R&D Kitchen,” but the place I actually like the most is Houston’s. It’s owned by the same people, but Houston’s lyrically didn’t work for me. In personal and familial crises, we’ll go there or order out.

“If I’m being honest about my upbringing in Santa Monica, what really exemplifies that fabric is a place like R&D Kitchen that’s ’90s era swanky, intense customer service, and somehow it’s bustling, but it’s not hip.”

During the pandemic [and before moving to Maine], we’d order takeout from there, which they never had done before…and I would create a playlist to emulate the restaurant playlist because they have a very specific vibe in their restaurants. I emailed someone there to get their playlist. They were like, “This is proprietary information, we won’t give you it.” I made a playlist called “The Hillstone Group,” and it’s my best guess at what they play plus some of my own personal songs that I think would improve the playlist.

Houston’s is, ironically, not a place I pity. It’s not a small business you’re rooting for. It’s almost slightly evil. It’s in this weird…fine dining, hospitality, generic world, and it feels totally superficial. At the same time, it’s somehow comforting and you wanna lean into the illusion, and you can almost disappear into it.

You sing about dreaming of the north side on “Northside,” so I want to hear about what that area means to you.

The neighborhood is actually North of Montana, and Montana—where R&D Kitchen is—and Montana is kind of the dividing line. Not that Santa Monica isn’t a pretty uniformly affluent area, but there are subdivisions within that.

North of Montana, the streets open up so much bigger. There were some fantastical homes and a good life, an opulence and a Hollywood money undercurrent to that entire area, but it did feel like a place where you could be secluded and find privacy in Santa Monica. As you kept going south, that was not the case. 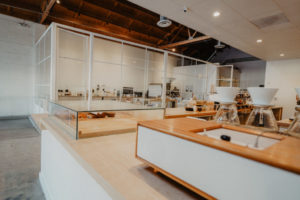 When you sing “dream of the Northside,” is it more of a fantasy of moving there and having gotten all of those things, or is it more of, “That dividing line is real and we’re never going to cross it”?

It’s not like I spent every day hoping to move and not liking my life. At the same time, when you’re a kid, definitions of success are really overt and gaudy. I remember our housekeeper, we went on a walk with her once. She didn’t live anywhere near Santa Monica, and I remember walking north of Montana [with her] and looking at the biggest, most ridiculous white-columned home and being like, “I’m gonna buy you that house when I’m older.”

The place where I got the idea for [Infinite Jess opener “Burning Man”], Maru, is this minimal hip coffee shop in the Arts District. I was sitting there talking to this DJ who was kind of a cheeseball guy but totally nice and meant well. He was sincerely discussing Burning Man and how important it was to him.

I didn’t know anything about Burning Man, and I was shocked to hear what this was—and this was really recent, by the way. This was, like, a year ago. This guy was going on and on about community and all of these things. It sounded kind of rad that he could make this deep a connection with it. It seems like something I never wanna be at, but the human emotions coming from this guy telling me about it were very compelling to me. FL