In Conversation: George Clarke on “10 Years Gone” and a Decade of Deafheaven

Ahead of the release of the black metal band’s new live recording, Clarke takes us behind the scenes of Deafheaven’s chaotic live shows.
Menu

Ahead of the release of the black metal band’s new live recording, Clarke takes us behind the scenes of Deafheaven’s chaotic live shows.

Last December, Deafheaven unveiled an ambitious tour calendar for 2020 that would see the innovative black metal troupe traverse North America before taking their chaotic live show to Europe and Russia, all in celebration of the band’s tenth year as a unit. While the list of forty-some confirmed tour dates for the year was by no means a record-breaking feat, anyone who’s ever seen the band live knows what a sheer force of nature they are, and how much emotional energy would be spent over the course of these intimate evenings. Fronted by the black-clad, hyped-up George Clarke, the Bay Area–reared ensemble otherwise looks like a harmless alt-rock outfit before the stomach-churning riffs and hell-spawned growls that open “From the Kettle Onto the Coil” reach your ears.

Along with the aggression of these performances surely familiar to any metal showgoer, what’s always set Deafheaven apart is their ability to master the impossible balance of hellish sounds and stretches of song more genuinely beautiful than anything a more conventional (and less-abrasive) rock outfit could provide. In between throwing each other’s bodies across the room, the audience stands totally rapt by the moments of shoegazing bliss or post-rock wonder before Clarke’s possessed vocals drop back into the mix, drawing your attention away from the sunflowers and flagrantly non-metallic imagery lining the stage and back to the grief-stricken centerpiece of the band.

Needless to say, that 2020 tour never came to fruition, which was the impetus for Deafheaven’s latest release attempting the impossible act of transferring that totally unique experience into something a little more pandemic appropriate. “We thought it would be a cool idea to present what would be the set list of the tour in an LP format,” Clarke tells me of their new live album, 10 Years Gone, speaking in a gentle voice far removed from what he exhibits onstage. “In my eyes that was a nice interim project while we reassessed what we were doing while we focused on writing new music, which was also part of the plan regardless.”

For more on the direction the band’s taken since its inception a decade ago and his intentions for the Deafheaven live experience, read on for our full conversation with Clarke.

I saw you for the first time at The Wiltern in 2018 for your Ordinary Corrupt Human Love tour, and I thought it was interesting how the dichotomy of your music translates to the live experience. Has this always been a conscious decision, balancing dark and light?

Yeah, I like it. It’s interesting, when you’re touring all the time and you’re seeing all these other metal bands, I think having a little of that injection of light makes the presentation a bit more novel. Another part of it is just to support letting the guys [in the band] show their personality—I think it would be weird if [guitarist Kerry McCoy] or anyone else dressed up in a more theatrical way like I do.

For that show you had Uniform and Drab Majesty opening—and for your cancelled tour you had Greet Death and All Your Sisters on the bill—who didn’t seem like a first choice for a metal show. What appeals to you about playing with non-metal acts?

These are just corners of our influence. I see our sound in bands like Greet Death and Drab Majesty, I think there’s a lot of musical kinship between those kinds of acts. Just as a fan, with something like All Your Sisters or Uniform who are a bit heavier on the industrial angle, that’s just stuff I like to see. It’s important to have things that are varied but have tethers. I think seeing four of the same kind of band in a row would be bothersome—for me it’s more about creating a mood and recognizing the small similarities between each act and trying to come up with something to expose people to. We’re primarily a metal band, I think it’s cool for our audience to expand their horizons. Perhaps if they don’t understand where our clean guitars are coming from, or why we have these certain kinds of effects, when they see another band perform with us who are made up of those types of elements it kind of recontextualizes the whole thing for the listener.

“I think our whole motif from the beginning has revolved around this idea of honesty and self-reflection and not being afraid to be really personal. To allow that type of subject matter to really flourish within the music, I think that our music calls for it.”

Did you have anything planned for this tour in terms of visual elements?

The idea for the 10 Years Gone tour was actually to be antithetical to the 2018 show that you saw. It was mostly a residency tour, we were doing multiple nights in cities at smaller venues. We were kind of getting rid of the Wilterns—for the Los Angeles shows we were gonna do two nights at the Lodge Room. I think the idea there was to celebrate the spectrum of our career, and I wanted to make those shows more intimate and not have barriers and really rely on audience participation for the excitement of the show. That was something I was very much looking forward to because we’ve been doing these big stages for the last few years.

Most of the metal I listen to is sort of escapist and fantasy-inspired, whereas Deafheaven is much more personal. Why do you think you use metal to confront reality as opposed to escape from it?

I think our whole motif from the beginning has revolved around this idea of honesty and self-reflection and not being afraid to be really personal. To allow that type of subject matter to really flourish within the music, I think that our music calls for it. While we have these sections that are a bit grandiose, what helps bring the weight to that is the emotional lyrical content. I think that having real experience to draw on, and things to talk about—even when they’re done in a kind of surreal language—is important for the music. It should be that way to serve the emotional complexity of what I think the instruments are doing. When it comes to metal, a lot of the stuff I listen to is based in stories, and while I love that, it just didn’t make sense for what we’re doing.

Having lived near wealthy areas in Chicago I always resonated with the songs on Sunbather about yearning for a better life through something like material possessions while understanding that it’s probably not really a life you’d be interested in. How do you think these complicated feelings carried over to your other records?

“For me, the live show is really a way to give the listener a visual representation of what they’re hearing. I think that living the experience of what the listener might feel at home when they hear the record is hugely important.”

I think my idea toward that situation in particular, and the way that I integrate that feeling into later albums, is a bit more refined now just in the idea that there’s a complexity in not moving forward, and how that can kind of hurt your longing for something else. There’s a tension between those two things in our music: the need to self-reflect and the longing for something more than what’s been offered. That’s how I related to the Sunbather feeling of looking into affluent homes and neighborhoods and being like [sighs]. Everything I’m focused on is kind of antithetical to achieving this lifestyle. I think that’s something that’ll always be with me—this sort of looking over at the other side wondering what it’s like, not necessarily wanting to be there but feeling like maybe there is something more than what’s been offered.

What do you hope to convey in your live shows?

For me, the live show is really a way to give the listener a visual representation of what they’re hearing. There needs to be a visceral element, and I think that fan connection is very important. I think that living the experience of what the listener might feel at home when they hear the record is hugely important. I try to aim for that—I want it to feel how it sounds, and that’s really the core of the show.

It feels cathartic and validating to see someone that’s not you be visibly angry about the same things you are. I think that’s the appeal of a lot of aggressive music.

Yeah, and not just angry, but frustration and sadness and all those things you’re not necessarily able to experience in your day-to-day. You can reach these sort of zeniths of emotion, hit this critical mass, and your hope is that thereafter you can recognize the release in it. And for me I think that’s cool. If what’s happening onstage is triggering this positive emotional response, even if it’s through this filter of ultimate frustration or anger, if it does that for you then we’ve done something good. FL 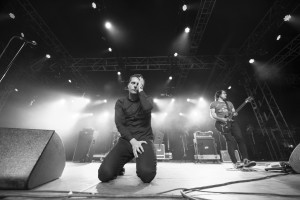