Emma Ruth Rundle & Thou, “The Helm of Sorrow”

Reviews
Emma Ruth Rundle & Thou, “The Helm of Sorrow” 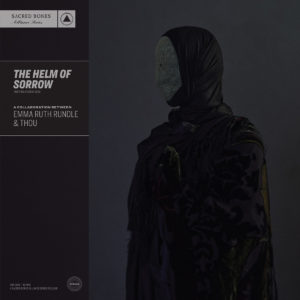 The collaboration between Emma Ruth Rundle and Thou might have produced, in May Our Chambers Be Full, one of 2020’s more unexpected releases, but it was also one of its best. On paper, Rundle’s brooding ambient-folk and Thou’s sludge/doom metal don’t seem like particularly compatible bedfellows, but it actually worked incredibly well—first as a live experiment and now on record. Though quiet and contemplative, Rundle’s music has always been shrouded in the same kind of darkness that Thou’s hellish, grotesque brand of metal thrives in. Combined, it made for a stunning, relentlessly bleak exploration into the catacombs of human existence.

The four songs on The Helm of Sorrow were recorded at the same time as the full-length and were actually included as part of the Diehard Edition vinyl release, and are now being presented as their own distinct volume. The title tells you exactly what to expect—here are some more mournful explosions of existential tragedy and aggressive solemnity that transcend genre while staying true to the roots of both artists.

Opener “Orphan Limbs” starts quietly, a hushed whisper of ambience that sees Rundle’s vocals take on an almost Patti Smith–esque timbre that floats above some gentle, if ominous, guitar. Just as the song has lulled you into a false sense of security about its composition, however, it gains pace, the gentle, hallowed acoustics rupturing into a combination of pure evil and desperation. Rundle’s voice is joined by the demonic snarl of Thou’s Bryan Funck, and both scream as if trying to purge themselves of whatever malevolent force has possessed them. Conversely, “Crone Dance” starts off at the harsher end of the melodic spectrum before being tempered and tamed for the slow drone sludge of the last thirty seconds.

Just as it did on the full-length, it’s that opposition—and apposition—that works so well here, either within the songs themselves or between them. While it’s largely absent from third track “Recurrence,” a snarling, relentless behemoth of a song, its fire and fury is in stark contrast to final song “Hollywood”—a much more melodic offering that’s a more morbid, dismal version of The Cranberries’ original with added death growls at moments. It is, bizarrely, as catchy and melodic as it is belligerent and inaccessible, but therein lies the beauty. Even if your inherent bias tells you this isn’t for you, don’t listen to your gut—you might be (un)pleasantly surprised.