Bird reconnects with his Squirrel Nut Zippers associate Mathus for the most straightforwardly old-timey music he’s made since the late ’90s.
Menu

Bird reconnects with his Squirrel Nut Zippers associate Mathus for the most straightforwardly old-timey music he’s made since the late ’90s. 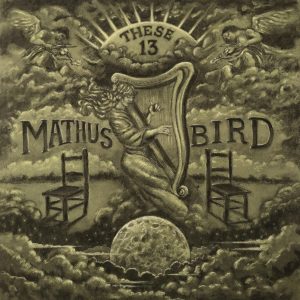 When Andrew Bird first started touring—armed with a repertoire of original songs rooted in pre-war American jazz, blues, parlor song, and cabaret—concert promoters would often entice audiences with the promise of swing lessons. Of course, students of Bird’s music should know by now that these promoters were missing the point: Though retro in sensibility, his songs were far too imaginative and creatively restless to function as cosplay, or to serve a purely didactic purpose. Frustrated by the narrow expectations imposed on him, Bird ultimately left his more obviously roots-oriented music behind in favor of compositions more ornate, impressionistic, and genre-defying.

You might say that These 13 represents a full-circle moment—not just because it reunites Bird with his mentor and Squirrel Nut Zippers associate Jimbo Mathus, but because it’s the most straightforwardly old-timey music he’s made at least since the late ’90s. It’s a duo recording through and through, featuring close harmonies, acoustic guitar, fiddle, live takes, a single mic. The material lives up to the modesty of its title; the baker’s dozen originals here are appealingly small-scale songs that lean into familiar forms, primarily gospel, country, and blues. They wear antiquity as a badge of honor: In “Encircle My Love,” Bird declares himself to be a “rake” and a “rambling man.” In “Poor Lost Souls,” a homeless person is dubbed “just a lump of coal.”

At its best, These 13 bears the fruit of true collaboration: Mathus keeps the lyrics earthbound and legible, two adjectives that sometimes elude his fanciful collaborator; for his part, Bird seems to understand that the charms of this music are all in the delivery, and he handles his lead vocal turns and his fiddle filigrees with vigor and panache. Listen for a moment in “Red Velvet Rope,” a country weeper about being in love with a celebrity, when Bird briefly drops his voice into a sonorous speak-sing cadence worthy of Conway Twitty. Such affectionate accents demonstrate the duo’s deep knowledge of these traditional forms, but also their enthusiasm; it’s generally enough to keep the music from feeling rote.

That’s not to say that These 13 ever quite transcends the feeling that it’s a busman’s holiday. Both Bird and Mathus have made music that breathes new life into roots-music clichés, where here they mostly seem content to inhabit those clichés, revealing the simple pleasures they have to offer. Something like “Jack o’ Diamonds” is appealing for its earthy harmonies and raucous fiddle, but the song itself is just a pile-up of rambling/gambling clichés. And “Three White Horses and a Golden Chain,” the album closer, is notable for how convincingly it imitates ancient, moss-covered folk balladry. Well, at least until the song’s extended instrumental coda, the one time on the album where Bird gives into ambient fiddle work and high-and-lonesome whistling. Here, the music feels unshackled from familiar forms; elsewhere, These 13 argues that familiarity is not without its pleasures.