Her first of many albums in a highly tailored musical and narrative costume, Clark’s third and most consistent LP set her on a mercurial, cryptic path that continues today.
Menu

Her first of many albums in a highly tailored musical and narrative costume, Clark’s third and most consistent LP set her on a mercurial, cryptic path that continues today.

It’s a dang shame Annie Clark has never been invited to the Met Gala. Costumes, both sartorial and narrative, are perhaps the most consistent thing about the art she makes as St. Vincent, so she’s always just one inspired fashion choice away from stealing the show at, say, 2019’s camp-themed gala. The “near-future cult leader,” as Clark phrased it on The Daily Show, of her fourth album, 2014’s St. Vincent, would’ve likely been her biggest red-carpet hit. When she debuted this character’s unhinged silver frizz upon announcing the album, I remember thinking her new hairdo was excitingly hokey, that she was winkingly self-aware of the zaniness it exuded. Yet I had little reaction to how Clark appeared while promoting that album’s predecessor, 2011’s Strange Mercy—now reaching its 10th anniversary—even though the LP is, in retrospect, her first time operating in a consistent disguise. And with that narrative oneness came what remains her most cohesive work to date, though one not at all bearing any hints of the path she’d set out for toward the mainstream with every album thereafter.

Strange Mercy finds Clark stepping into the shoes of a “sad housewife,” as she told Time in 2017. Not that you need Clark’s words to identify this character: The storyteller of Strange Mercy, among other things, eats flowers in the world’s most sterile backyard and watches parties (a recurring theme of hers) through keyholes. She drifts slowly, at an eerie remove, through a world that she perceives but can’t connect to whatsoever. The album’s two music videos—“Cruel,” in which Clark maintains a distant but fearsome gaze as a family kidnaps and grooms her for their motherly duties, and the Hiro Murai–directed “Cheerleader,” in which she literally disintegrates in front of onlookers—bring this character to life so vividly they feel inextricable from the songs. The whole multimedia experience is like realizing someone you distantly know has gradually receded from your friends’ lives yet can probably be brought back in if your friends just reach out.

A narcotic haze lingers over the entirety of Strange Mercy, as though the album’s narrator has taken a sleeping pill and stumbled at two miles per hour into a blissful dream that’s somehow off, like Inception meets Brave New World on the scale of domestic simplicity. The sound is a drastic departure from the album’s two predecessors, Marry Me and Actor; where the former introduced Clark as precious but able and more than willing to strike at any moment, the latter saw her adding caustic distortion and guitar tricks while dialing up the orchestral elements and inventing a new narrator for every song. Strange Mercy, a singular character study of someone who verges on nonexistence, is almost none of these things. Typically, save a dash of MIDI strings on “Surgeon,” the only thing behind the often still-ripping guitars and occasional unhinged keyboard solos are milky-grey synths and percussive pitter-patter.

A narcotic haze lingers over the entirety of Strange Mercy, as though the album’s narrator has taken a sleeping pill and stumbled at two miles per hour into a blissful dream that’s somehow off.

The scaled-back palette makes it feel like the person telling these stories has dipped so far into depression, exclusion, and confinement that her physical structure has all but faded, leaving only a ghost of her former emotional breadth. “Cheerleader” is just skeletal guitars and Clark’s tale of a regretful deceiver seeking liberation from the corner she’s backed herself into. As drums come in and the guitars intensify during the chorus, the full weight of this character’s desire to break free becomes crushing. “Surgeon”—which boasts a half-step key change, Clark’s most bracing falsetto, a searing 45-second keyboard solo, and a guitar lick so technically dexterous Eddie Van Halen would blush—is full of pills and body image issues. Its narrator “spends the summer on [her] back,” but not in a sexy way: She’s glued to the TV, unable to live a real life. On the album’s most tranquil song, “Champagne Year,” the main instrument is a muffled drumbeat that resembles the world’s quietest heartbeat, as though Clark’s character feels so nonexistent that only her gentle pulse reminds her she’s alive. “I make a living telling people what they want to hear / It’s not a killing, but it’s enough to keep the cobwebs clear,” she intones, not in the least happy with her situation but also not about to do anything to change it.

Taken another way, that “Champagne Year” line could be about the trials and tribulations of working as a musician in this godforsaken industry. It’s one of only two moments on Strange Mercy that feel connected directly to Clark rather than the character she uses as a shield, and the other moment is equally crystal-clear only in retrospect. “Our father in exile, for / God only knows how many years,” the narrator of the bone-chilling ballad “Strange Mercy” sings to someone addressed as “little one.” Eventually, that little one takes the mantle and makes a bold declaration over simmering guitars that quickly reach a rolling boil: “If I ever meet the / Dirty policeman who roughed you up / No, I don’t know what.”

In 2017, Clark told The New Yorker that Strange Mercy was entirely about her father’s imprisonment for stock manipulation, a personal matter previously unknown to the public. Even if Clark were obligated to let anyone so deeply into her private life (she never was, and it seems she never will be), her claim seems somewhat dubious: Only Strange Mercy’s title track so much as gestures at her father’s prison time. Funny enough, when Clark would later attempt to address her dad’s white-collar crimes at length on this year’s Daddy’s Home—the first album she wrote after publicly discussing his imprisonment—that album would also only directly address the situation on its title track. “Daddy’s Home,” though, feels glib rather than intimate. All this time later, “Strange Mercy” remains the clearest window into how her father’s imprisonment affected her, and almost nobody listening upon its release (and for over a half-decade afterward) could have possibly known.

It’s understandable that Strange Mercy didn’t do more for Clark than make her a top-tier indie darling: Listening to it instead of what came after is like choosing to go to MoMA instead of the Met.

Clark would eventually use the massive critical acclaim that Strange Mercy earned as a springboard into a record deal with the major-adjacent label Loma Vista (Strange Mercy was her final 4AD album) and the easier mainstream access such a label can provide. St. Vincent, her first Loma Vista record, was often zanier and more adrenaline-rushing (if not a chaotic grab bag of styles) than Strange Mercy, and it led to her SNL debut and first Fashion Week shows. 2017’s MASSEDUCTION, a record that’s perhaps her saddest and most personal (if anything she’s done can really be called that), divvies its time among humanoid glitch-pop and post-martini balladry, and it saw her collaborating with omnipresent pop sensation Dua Lipa on the Grammys stage. Daddy’s Home found Clark on SNL yet again, though the album faced some critical disdain—previously rare for her—given its arms-length storytelling and complete overhaul of Clark’s abrasive, crackling sound. Combined, these three albums have propelled Clark to nearly household-name status in the “musicians who get newsstand magazine features but aren’t on Top 40 radio” world (think Phoebe Bridgers, HAIM, Mitski). This path began with St. Vincent, and that timing speaks to what might stand as Strange Mercy’s defining quality in the St. Vincent catalog: For the final time in her career, Clark’s sights would lean more art than pop.

That art is, of course, stunning to gaze at, kind of like how Clark appears to her museum of onlookers during the “Cheerleader” video. As such, it’s understandable that Strange Mercy didn’t do more for Clark than make her a top-tier indie darling: Listening to it instead of what came after is like choosing to go to MoMA instead of, well, the Met. Nothing before or after it, though, captures life in semi-self-imposed exile in quite the same way. Not even Clark herself, on later Strange Mercy soundalikes such as “Prince Johnny,” could put the genie back in the bottle exactly the same way; of course, most of what she’s done since Strange Mercy has been just as enticing, just for entirely different reasons. The album remains singular today for marking Clark’s shift toward her now-established calling card: building worlds of her own rather than fusing oft-trodden styles. Strange Mercy was the first, but far from the last, St. Vincent album to function as not just a costume, but a universe. FL 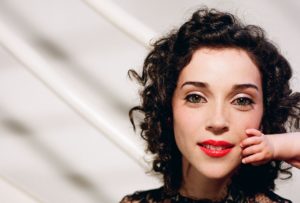