In Conversation: José González on the Intentional Directness of “Local Valley”

The Swedish-Argentinean songwriter’s fourth album removes the veneer, contemplates the contradictions in our nature, and embraces all our messiest vestiges and claws.
Menu

The Swedish-Argentinean songwriter’s fourth album removes the veneer, contemplates the contradictions in our nature, and embraces all our messiest vestiges and claws.

José González’s music has always seemed more heart than head. Put on one of his records and you’ll soon be floating downstream, the current of elliptical guitars and feathery vocals whisking you away from intention and into intuition, a place where individual songs are less important than the tide of quiet warmth into which you helplessly succumb. But perhaps that’s always been his most impressive trick: lulling listeners into security before nudging them in the ribs with a pillow, slowly shedding the blinds, and waking them up with a whisper. González’s newest record, Local Valley, finds the singer-songwriter amplifying that whisper into—if not a full-throated shout—something far more immediate and direct than ever before.

It’s not that this is the first time González has had something to say, but it may well be, with the help of confidence and wisdom, the first time he’s been ready to say it loud and clear. This kind of communication, and sometimes lack thereof, comes up again and again during our recent phone conversation. Language, metaphor, and the titular Local Valley, itself a meditation on how we often lack the tools to properly connect with one another, are all points of focus for González, whose prolific and unique career offers an intriguing backdrop for which to explore these ideas. This is still the José González who bowled you over 15 years ago with his cover of “Heartbeats,” but this time around we get as close as ever to knowing exactly what makes him tick.

I wanted to talk a little bit about “El Invento,” the first song you’ve ever released in Spanish. You’ve said in the past that Spanish and Swedish felt too direct, and English worked as a kind of shield—why did you feel that this was the right song to remove that guard?

I think the time is right for a number of reasons. One is that I’m older and don’t feel as awkward about things as I used to. I really didn’t have any good reasons to only sing in English on the previous albums, but when I tried other languages it just didn’t come out as fast as in English. Another thing, I guess, is speaking Spanish with my daughter Laura—softening up my Spanish by speaking with her made it feel even more natural. Also, with this album, the topics I’ve been writing about are more “me,” so in a way it’s been easier to write all the lyrics, independent of language. With other albums I was trying to be more metaphorical and enigmatic in a way, sometimes because I didn’t know what to write about. It’s just been fun to write in Spanish and Swedish just to mix up the languages and put more “me” into the album.

“With other albums I was trying to be more metaphorical and enigmatic in a way, sometimes because I didn’t know what to write about. It’s been fun to write in Spanish and Swedish just to mix up the languages and put more ‘me’ into the album.”

As someone with such a long career, what’s your relationship to your past work—is it something you consider as you approach a new project, or do you try to work more with blinders on?

I look back a lot on my previous albums, I’m guessing more than most musicians. I’ve had this idea for a long time that I want to stick to my guitar and vocals, even though I know I’m able to do other styles, especially when I’ve done music with Junip and other collaborations. I want there to be a thread from album to album in terms of style. I enjoy that way of writing. As I’ve been writing in the notes for this record, I mention previous songs as inspirations for the new ones. “El Invento,” to me, is one of those classic songs, similar to “Open Book” from the previous album, which was inspired by Paul Simon and those classic singer-songwriters. Many times there are twin songs somewhere in my discography.

You seem like someone with a wide variety of interests outside of music. How do you think those things make their way into your songwriting?

They used to be separate from my songwriting, but with every year I’ve been incorporating more and more of my intellectual interests into the music. At first I wanted to keep them separate, especially the ones that are more semi-political, but now I’m pretty comfortable with incorporating what I feel are interesting ideas, almost using them as name-dropping. On “Head On” I used economic terms in the middle of the song. In “Lasso” I use the term “mean machine” as a term relating to our brains. Of course it’s always a challenge to make poetry out of these topics. It’s a balance where I’m sure there’ll be some people who don’t notice, some people for whom it doesn’t work, and some who’ll find it interesting. 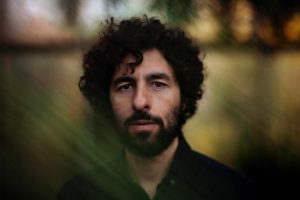 “Horizons” is one song in particular that seems to have an intentional message. Why did you feel it necessary to take some of these topics—fake news, science, secularism—in a more head-on fashion than you might have done previously?

It’s something I find extremely interesting and important. When I was younger and making more hardcore music it was usually tied into trying to change the world for the better, and I think I still have that complex in me. Now that I’m writing about myself, I find it easier to write about stuff in a more semi-activist manner. I think it’s easier because I found frameworks for things. Secular humanism, for example: I’ve been reading lots of books and hanging out with people who are very knowledgeable about these topics, so I’ve felt more secure in my thoughts and ideas. Ultimately, it’s because I still do want to change the world for the better.

“Now that I’m writing about myself, I find it easier to write about stuff in a more semi-activist manner. I think it’s easier because I found frameworks for things.”

You’ve talked about the behavioral thought experiment The Elephant and the Rider as an influence on the album’s cover. What do you find interesting about the push and pull between the emotional and rational sides of our brain?

I think it’s extremely interesting, just the fact that we’re smart primates so we still have a lot of baggage in terms of our evolutionary psychology; how we think about social hierarchy and us versus them, which is so common in the animal world. Then, of course, the rational side where we seem to be able to understand ourselves more and more, and in that understanding we can become aware of our baggage and try to use our rational ways of thinking to come up with ways of living with the baggage we have.

How has the way you think about reception to your art changed over the years?

I have two sides, one that really cares about what people think and one that doesn’t care at all. I do care about what people think, partly because I’m interested. Back in the day, I used to care more in an emotional way. Like, “Why can’t they like what I’m doing?” or “Why did they only give me three when I made an album that’s a clear five?” Nowadays I’m curious whenever I hear what people think, but it’s not necessarily because I’m going to change what I’m doing. It’s interesting to know how people react to what I do. Similar to the use of languages, I feel more comfortable, less emotionally involved in what people care about than before. FL