The debut album from the outsider-rap cowboy is a bold, verbal, and vocal display of what it must mean to be lonely at the top.
Menu

The debut album from the outsider-rap cowboy is a bold, verbal, and vocal display of what it must mean to be lonely at the top. 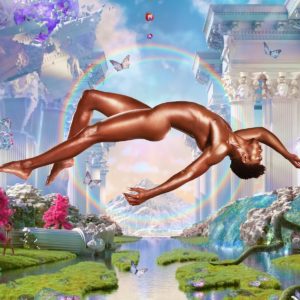 Of all the debut albums that could’ve been forced to rely on the frippery of trend, the slash of fashion, and a series of silly-yet-stunning and image-defining pre-release videos with a visual language all their own, Lil Nas X’s Montero could have failed. Bad. Thankfully, long after branding himself as an outsider-rap cowboy and a gloriously gender-fluid, couture-conscious LGBTQ+ icon—within and outside of hip-hop—X found a way, on his full-length debut, to make his flash interpersonal, warm, and even world-weary at age 22. Ultimately, Montero is a bold, verbal, and vocal display of what it must mean to be lonely at the top.

From its bottom (the intimate, album-ending, country-lite “Am I Dreaming” with Miley Cyrus) to its top (“Dead Right Now” and its fuck-you to naysayers), to its most poignant look at a rudderless existence (the teary, mid-album “Tales of Dominica”), Nas X achieves the near-impossible task of making adult, troubled pop-hop that never shies from clever street soliloquies. “It’s too many ups and downs on this ride,” Nas wells up on “Void,” one of Montero’s most sprawling tracks. Genuine emotion such as this is what’s made Nas X the polar opposite of machismos such as Migos, and momma’s man Kanye West, who seemed to merely use his late mother’s tender memory as a promotional hook, and little more, on Donda.

In fact, the last major label hip-hop album to portray this type of deep-seated hurt and helplessness successfully and wholly, was JAY-Z’s 4:44 in 2017, a record brave and vulnerable in its discussion of security, suffering, and the human condition. If Nas X’s new album has any root or influence, it’s with Hova’s display of hurt. “Sun Goes Down,” most certainly, is the album’s truth-turning centerpiece, a confessional piece ruminating on how “gay thoughts would always haunt me.”

Ultimately, though, Nas X proudly finds his way forward—as an LGBTQ+ hero paired with another gay legend, pianist Elton John, on “One of Me,” and as a young man unafraid to reach out for love on his own terms on the uptempo “That’s What I Want,” with lines like “I need a boy who can cuddle with me all night.” Full of surprises, always, Lil Nas X’s brand of ebullient and emotional hip-hop is wise and wonderful far beyond his years.