Lindsey Jordan discusses her anticipated sophomore LP before it drops this Friday.
Menu

Lindsey Jordan discusses her anticipated sophomore LP before it drops this Friday.

Snail Mail’s 2018 debut album Lush had the power to ease the pain of a breakup six months before it even happened, and would still be around to patch up the wounds six months after. It became an outlier in an incredibly strong scene of American indie rock stars that came to the forefront in the late 2010s, including Phoebe Bridgers, Soccer Mommy, and Lucy Dacus. Lindsey Jordan’s poetic post-breakup examination perfectly portrayed how absorbing love can be, reaching a wide audience for whom the songs resonated as they began to assign their own meaning to Jordan’s scriptures of fading romance. Inevitably, a relentless tour cycle started, with years spent on the road while quickly transitioning out of her teenage years.

“The tour really fucked me up,” Jordan says. “I was putting pressure on myself and I had nothing to write about, either. It was big for me to wait [on writing a new album] until I had things to write about. If you heard my ‘tour album’ it wouldn’t be anything anyone asked for. Everyone would be like, ‘How am I supposed to relate to this?’” For all musicians who tour relentlessly there are consequences for traveling the world, which you have to accept. “You miss birthday parties, weddings, funerals—they’re hard. It’s a conscious trade off. I choose to be away for a lot of the time, which changes how you sit in people’s lives.”

Transitioning into your twenties is hard enough, but with a hectic touring schedule, Jordan had to learn to grow up quickly. Initially wanting to be at every single party or industry event and to make friends with all the other bands around her, this couldn’t be sustained and she soon came to realize the unique skill set that being a touring musician demands. “You learn how to do everything, like how to treat people on a stage,” she explains. “Being at a festival and watching someone treat their band kind of badly, I’m like, ‘OK, I really know how to treat my band now.’ Just having your head screwed on is number one. I think to do the job with longevity you just have to be clear-headed and focused.”

“[On tour] you miss birthday parties, weddings, funerals—they’re hard. It’s a conscious trade off. I choose to be away for a lot of the time, which changes how you sit in people’s lives.”

Jordan no longer controls the Snail Mail social media channels, instead preferring her team to look after them. It got to a point where she could no longer see it as a conduit for authentic fan connection. “It’s branded connection—it doesn’t resonate with me, it doesn’t feel genuine,” she tells me. “It feels calculated, like an equation.” Artist social media profiles often feel as if every tweet and well-groomed selfie was designed in a boardroom with scope for increasing awareness and marketability. Authenticity can be hard to come by, so how can artists connect with their fans in a genuine way? “That’s the golden question,” Jordan sighs. “Walk that [social media] out for real connection and I’m interested, but I don’t know what that would be.”

One of the last great ripples from Jordan’s social media presence was a live stream performance where she told fans that her second album would be even more depressing than the last. That album, Valentine, takes the deepest blows found on Lush and presses hard on the wounds. The title track and lead single show a clear sonic evolution as murmurs of synth stalk in the shadows and Jordan switches from a hushed tone to an almost blood-curdling scream of, “So why’d you want to erase me, darling Valentine?” 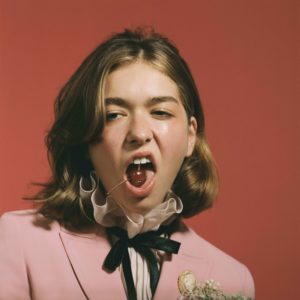 As she reaches into greater emotional depths, the Snail Mail sound has only gotten bolder. The second album’s process was one of trial and error. “I wanted an elevation, but only if it was an actual elevation. Working on the string arrangements to make sure they were elevating the song I was like, ‘If we’re gonna put anything on here, let’s make sure it’s actually right.’ Hearing somebody’s song and a random flute comes in, like…OK? It just doesn’t need to be there.”

“I realized being as genuine as possible meant portraying myself in an ugly way. ‘Sometimes I hate her for not being you’ is a nasty line. I was like, ‘I think this portrays me as a piece of shit, but it’s true!’”

Lindsey Jordan gives a lot of herself to these songs, each one relative to her own experience. Here we get to see her in a new, sometimes much darker light, such as on “Ben Franklin.” “Expanding as a writer, for me, meant exploring more avenues of feeling. I realized being as genuine as possible meant portraying myself in an ugly way. ‘Sometimes I hate her for not being you’ is a nasty line. I was like, ‘I think this portrays me as a piece of shit, but it’s true!’” Meanwhile, the equally bittersweet “Forever (Sailing)” propels love to its most cosmic, overwhelming proportions—it’s about feeling so much for someone that it’s not just all-consuming, but fucking terrifying. The crystalline convergence of starry-eyed tones gives way to a sudden realization: “So much destruction, look at what we did.” Through mutually assured destruction comes the decimation of anything else in orbit. The stakes feel higher than ever, the well is at its deepest.

When going through heartbreak, how do you go about rebuilding yourself? Jordan is already shaking her head as the question is asked, but a puppy dog look soon gives way to a smile. “Reframing it and looking at it as a positive, and looking at how you’ve grown from it—I think that’s the best thing that you can do. I’m really big on exercising, big on cooking and eating healthy. I’m massive on making sure my body is in the right place before I get my head in the right place. It’s about not forgetting that your physical self exists, doing what makes you you. Ultimately, everything you love about that person can probably be found within you as well.”

Jordan has made a career out of sharing snapshots from some of life’s most excruciating moments, some of her own biggest losses and periods of her greatest personal turmoil. When sharing so much, it can be hard for an artist to define their own boundaries as to how much of their world the listener gets to see. “I feel like I gave away a lot in the lyrics, and explaining further in some cases gives away more than I’m willing to. I toed the line so closely with every single song. I’m still trying to stay within the boundaries I set.”

Yet this line in the sand between privacy and tell-all is arguably what makes Snail Mail such an enthralling storyteller—each song feels like an invitation. In being so in touch with herself, Jordan’s musings on how completely shattering relationships can be becomes a tool for us to navigate our own experiences. At the end of Lush, Jordan was left feeling a former partner’s absence on “Anytime.” On Valentine closer “Mia” we’re in that moment again, yet this time we’re in the room with the tears falling. We’ve delved even further into Snail Mail’s world of love, longing, and fracturing heartbreak. FL