A good music festival for a bad year.
Menu

A good music festival for a bad year.

Go ahead and say it. It’s okay. We’ll even mouth the words along with you.

Unless you’re a lotto winner, a newlywed, or Lin-Manuel Miranda, the odds are you won’t remember 2016 fondly. On a global and national scale, there’s such urgent access to and amplification of chaos, strife, confusion, and loss, it’s hard not to take every round of the news cycle personal. We ache. How do you protect your heart from a calendar? Where do you hide from reality?

Fuck Yeah to a two-day escape pod at the end of summer: FYF Fest, a.k.a. FYF, a.k.a. Fuck Yeah Fest, LA’s premier music festival. So many people need a space on FYF’s temporary Noah’s Ark, it’s grown to biblical scale—fitting for a year where the apocalypse feels like it’s within throwing distance.

Fuck Yeah to fighting the year. The moment you pass security, you cross the length of the University of Southern California’s sunbaked soccer field. There’s a competition commencing for your attention, and it’s going to get physical. You will sweat. You will circle the entire length of the USC Coliseum, resting in its shadow, weary gladiators in the fight against what’s scaring you outside the blocked-off streets.

Fuck Yeah to a retreat. Thousands of attendees survey the fest’s five stages in boots and bandanas, as if they’re roaming farmland or desert and didn’t arrive by Metro. The college campus surroundings are fitting for how many concertgoers lug backpacks stuffed with supplies. As the day proceeds, the urban camping chic will strip away to reveal party couture; Fuck Yeah to as many people as possible noticing you getting lost in a crowd. 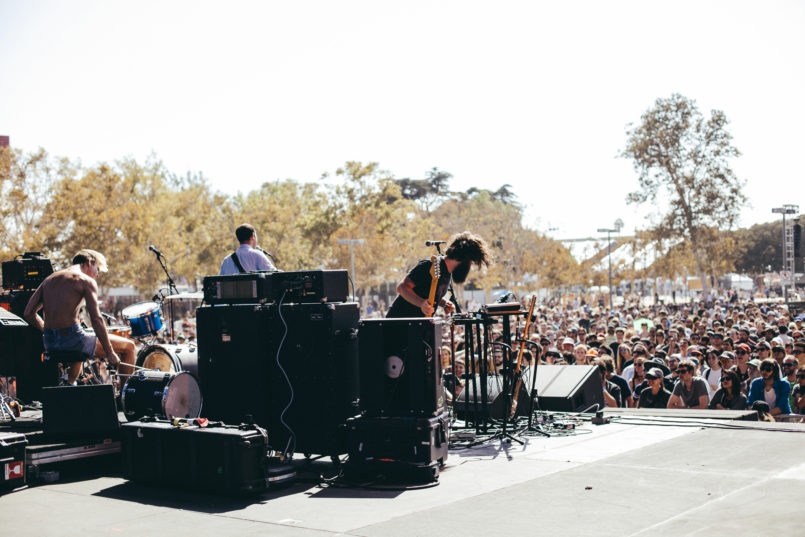 Fuck Yeah to the Lawn Stage, full of discoveries and offbeat alternatives to draw people in on their way toward the Main Stage: Hop Along’s high-strung folk rock; Preoccupations’s playful mix of noise and post-punk; the soulful sincerity-funk of Charles Bradley, who lured hundreds of heathens to self-declared church on the Sabbath Day through jaw-dropping old-school stage presence; and Todd Terje and the Olsens smiling directly into the sunset, as if conjuring the dusk through the infectious loops and joyous congas that kicked off the weekend’s least-hyped and loosest dance party.

Fuck Yeah to the Trees Stage, named for its oasis of greenery, where young folks danced to Peter Bjorn and John’s “Young Folks” and middle-aged punks cheered for Black Lips’s “O Katrina!” as the Atlanta group slowly teased the opening notes. Watching Saves the Day performing all of Stay What You Are in an enchanted forest, with every bit of the album as bright and angsty as when you were in high school, certainly feels like a time-traveling reprieve from the present day.

But reality has a way of showing up fashionably late. The realities of 2016 are right outside the door, after all, with police-brutality protestors chanting just outside the entrance—a prophetic witness. Inside, t-shirts and hats carry political iconography. LCD Soundsystem are interrupted by the chirp of thousands of iPhones spreading an emergency message about a rumored gunman at LAX—a false alarm, but a chilling reminder of the music we face every day in our country. 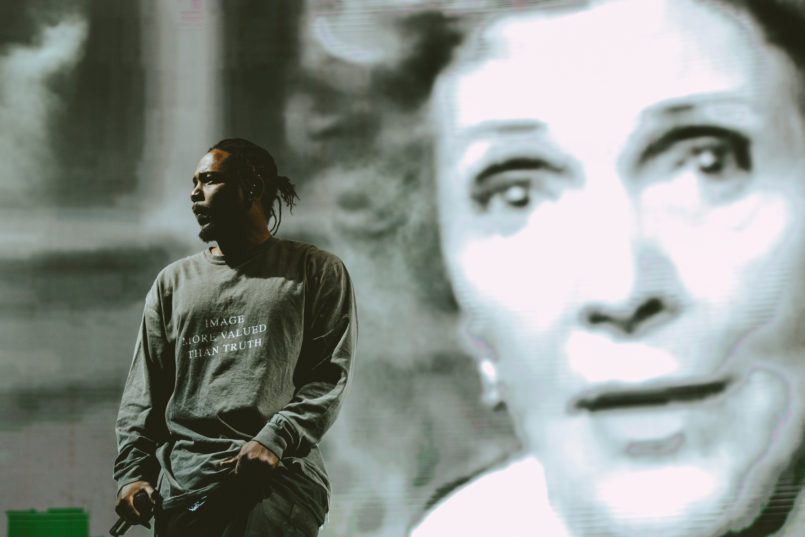 Fuck Yeah to moving our bodies on the first day so we can choose why we’re exhausted for a change. The lineup on Saturday seems to tell us to dance it out, wearing down and exhausting concertgoers with high-octane Main Stage sets from DIIV, Grimes, and Tame Impala. “Time to get real, Los Angeles,” the latter band’s frontman Kevin Parker grins before stomping into “Elephant,” and, oh yeah, eventually bringing out Lady Gaga in a moment that is surreal even by the group’s psychedelic standards. Kendrick Lamar follows them with pure kinetic energy, owning every inch of stage and several inches above it as he commands his loving audience to “levitate levitate levitate levitate” with a pyrotechnic performance of “untitled 07 | 2014–2016.”

Fuck Yeah to rebuilding and reinforcing our spirits on the second day. Though there is plenty of dancing to be had, Sunday’s lineup leans toward poignancies and confident, defiant personalities, from the poetic beats of Blood Orange to Anohni’s challenging, haunting performance-art darkness. Plus, many of the big draws are older performers still carrying the torch and rebelling against their physical age, like the spritely Black Lips and the reanimated powerhouse of James Murphy’s LCD Soundsytem, who are carried as always on the back of Murphy’s aging-hipster characterization. 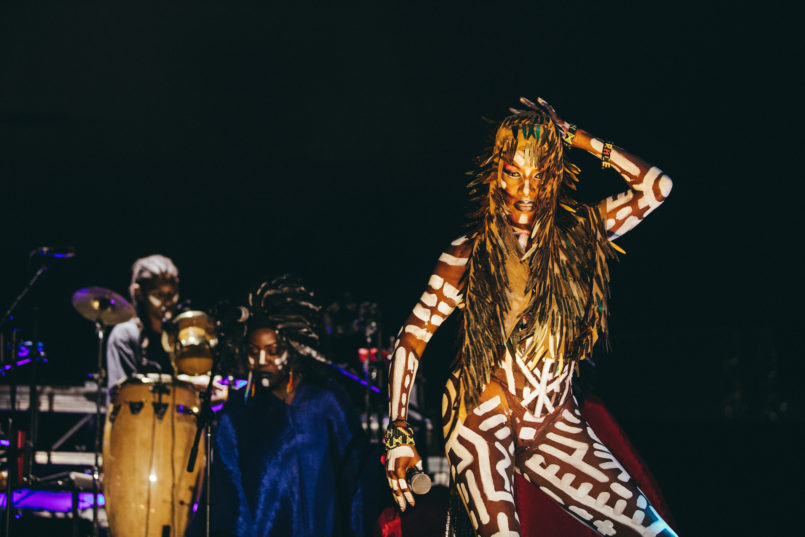 And speaking of defying age, Fuck Yeah to the iconic diva Grace Jones, to whom Murphy immediately defers. “If you missed Grace Jones, you fucked up,” he shrugs. Jones struts, prowls, twists, and dominates the stage with howling anthems of freedom. She delivers gay club anthems and “Amazing Grace” with equal commitment and loving personalization. Her palpable comfort in her own skin lowers jaded defenses across the Main Stage audience as she hula-hoops her way into thousands of open hearts that really need it. Because it bears mentioning: she’s sixty-fucking-eight. So what the Fuck Yeah is your excuse for letting the world age you beyond your years? 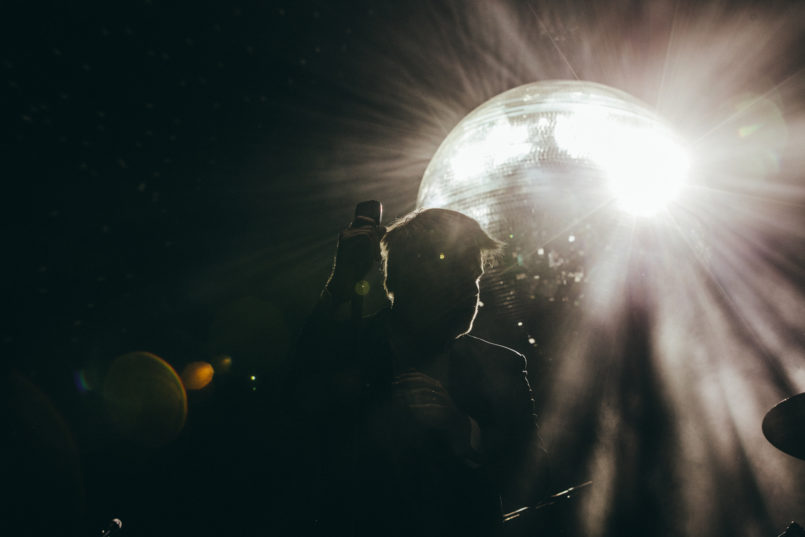 People shuffle out of FYF Fest’s exits shortly after LCD Soundsystem’s transcendent “Dance Yrself Clean,” having done just that. But beyond dancing, they’ve done some work this weekend. They have collected messages of strength and hope. Some have taken as much as they could, some have taken just what they need, but all of them have made the festival personal so they could take the escape back to reality with them.

We need it. Because as our bodies ache and our ears ring and we reflect on new favorite songs and closeness to greatness, we also think about when we have to set our alarms for the morning and realize: don’t we all still have a few more months of 2016 left to go?

RZA (Banks and Steelz) at FYF / photo by Rozette Rago